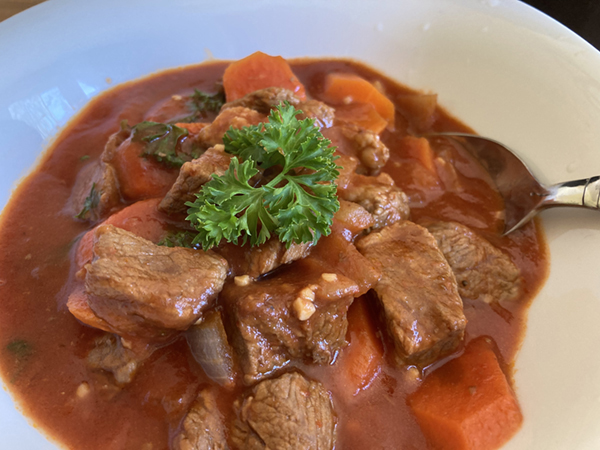 Hearty German Goulash Recipe is a one pot rustic dish that is filling, delicious, and aromatic as it cooks. It’s the perfect comfort food for a cold day and a Rindersaftgulasch to look forward to.

We’ve also included the list of the perfect side dishes below to accompany your Authentic German Goulash Recipe.

Goulash is thought to have originated in Hungary in the 9th century. It was originally prepared by herdsmen who were also shepherds.

Different cultures make different versions of goulash. A German, for example, likely wouldn’t recognize the American’s concoction as even being goulash.

German. German goulash is of course the recipe that we’ve focused on for this article. It consists of cubes of bite sized pieces of beef chuck roast as well as sautéed vegetables, beef broth and tomato paste for the base and a wealth of spices and seasonings for a delicious flavor. It is made with a thick stew like base.

Czech. Czech goulash compared to Hungarian goulash tends to be milder and beefier with not as many vegetables.

American. American goulash is a quick dish made with ground beef, seasoned tomato sauce, and mixed with macaroni noodles.

To make a traditional and authentic German goulash, you will need the following ingredients.

What I Love About German Goulash Recipe

This German goulash recipe is one of our new favorites. It makes a perfect winter dish as it’s hearty and will warm you from the inside out. It’s perfect for lunch or dinner. And includes wholesome ingredients as well as a totally flexible recipe.  Why will you love this dish?

When making this recipe ahead, we only suggest doing so about a day in advance. This is just long enough for the flavors of your delicious goulash to enhance and meld together, but also short enough that the dish will still taste fresh.

If you plan to make this ahead much more than a day or two, you’ll want to consider freezing it to lengthen its shelf life. The best way to freeze German goulash recipe is to place the contents in a zipped freezer bag, remove any excess air, and store in the freezer for up to 3 months.

There are many beef goulash recipe variations out there on the web. Some include the use of noodles and ground beef for an American goulash, while others such as this recipe include the use of chunks of beef chuck to make your stew like dish that includes a tomato and beef broth base.

When making German goulash recipe, feel free to add in any additional vegetables, spice, or herbs that you desire. Or leave out any that you don’t care for. That’s part of the great opportunity of making a homemade customized recipe.

How to Store and Reheat?

The best two ways to store homemade German goulash recipe is in the refrigerator for up to 4 days, or in the freezer for up to 3 months. Both methods should use an airtight container or zipped food storage bag.

To reheat German goulash stew, place it in a sauce pan on the stove over medium to low heat and stir until the dish is heated through. Or place it in a microwave safe bowl, cover with a paper towel, and place it in the microwave for 1 -2 minutes depending on the power of your microwave.

Gravy Should Be Thick

German Goulash recipe makes a thick gravy or broth like liquid base for this dish. It should not be liquid or runny like most soups that you’re familiar with.

In our recipe instructions, we’ve included steps for how to make German Goulash using the stovetop. However, other cooking methods such as the crockpot, instant pot, and conventional oven can be used as alternative cooking methods.

Check out our frequently asked questions for more information about other cooking methods and expert tips for this recipe.

Since our German goulash recipe calls for paprika, we thought this might be a good time to cover the different types. You might be thinking, huh, I thought there was only one kind. But there are actually 3 main types and they each lend a different flavor to your dishes.

Hungarian paprika. Hungarian-style paprika is not smoked, but instead it’s fairly sweet. It’s generally used to season soups and stews.

Sweet paprika. Sweet paprika is typically just labeled as paprika.  It can be used as a garnish or as a flavoring.

Smoked paprika. Smoked paprika is made from smoke dried chili peppers that were dried over an oak fire before being ground into a powder.

Following are a couple of pro tips for making the best German Goulash.

What to Serve with German Goulash?

German Goulash Recipe goes great with a salad, bread, and dessert. Here are our recommendations for what to serve with German goulash.

Following are frequently asked questions for making homemade German Goulash Recipe.  If you have a question that’s not answered here, feel free to drop it in the comments box below and we’ll be happy to answer it.

Can I use ground beef instead?

Can I make German goulash in the oven?

For how to make German goulash in the oven, brown the meat first as outlined in our recipe instructions and then add the remaining ingredients and bake at 350F degrees until the vegetables and meat are tender and the broth is thickened. This will take about 2 hours.

Can I turn this into an Instant Pot goulash?

Yes, there’s no reason this can’t be made in an Instant Pot to speed up the cooking process for your convenience.

Can I turn this into a crockpot goulash?

Yes, it also works as a crockpot goulash. There are so many benefits to cooking in a crockpot since it provides a mostly hands-free experience which gives you time to do other things throughout the day.

Can I make German goulash ahead of time?

Yes, German goulash is great for making a day in advance. It allows the flavors to meld together well, and the outcome is tastier.

Can I freeze goulash?

Yes, German goulash can be frozen for up to 3 months. Just place it in an airtight container or sealed freezer bag with the air removed.

How long will it keep in the refrigerator?

German goulash recipe can be stored in an airtight container in the refrigerator for up to 3-4 days.

Shouldn’t I sear the meat first?

You can sear the meat first if desired, but there’s no need to sear it when cooked as suggested in our recipe instructions.

Where did goulash originate?

German goulash soup recipe, like we’ve featured here is thought to have originated in Hungary, although it is common and considered traditional in Germany.

What is German goulash made of?

Is goulash a German word?

Goulash originates from the Hungarian word “golya” which means herder or cowboy.

Rindergulasch is German beef goulash such as the recipe we’ve shared here.

What is the difference between Hungarian and American goulash?

Hungarian goulash is a thick beef stew, made with chunks of beef and vegetables, that’s been seasoned with spices. The recipe we’ve shared here would be considered Hungarian goulash.

On the other hand, American goulash is a quick dish that’s made with ground beef, noodles, tomato sauce and herbs.

Both American goulash and Hungarian goulash are considered to be comfort food dishes.

What is the difference between goulash and stroganoff?

Goulash is typically made with beef and has a tomato base thick sauce. It can include vegetables.

On the contrary, stroganoff is typically cooked on the stovetop and consists of beef, mushrooms, and onions. It is made with a white sauce that traditionally includes sour cream and brandy.

What is the best cut of beef for goulash?

Beef chuck is the best cut of beef for goulash. However, you could use any cut of beef that allows you to cut the beef into bite sized chunks and that is tender.

Can I make German goulash in a slow cooker?

Yes, German goulash cooks great in a slow cooker. And using a slow cooker or crockpot also allows you to put all the ingredients in and then leave it alone until it’s done. It’s a great way to free up time.

Can I make it on the stovetop?

Yes, cooking German Goulash Recipe on the stovetop is also an option. You can fully cook the meat and vegetables, then add the broth ingredients too. It’s great from start to finish on the stovetop.

How long can you keep this in the fridge?

German goulash recipe can be stored in the refrigerator in an airtight container for up to 4 days.

Can you freeze this?

Yes, German goulash recipe can be kept in the freezer in an airtight container for up to 3 months.

How to Make German Goulash – Step by Step Recipe Instructions

1. Chop beef into 1 inch bite sized cubes. In a large mixing bowl, toss with salt and pepper and let sit for 15 minutes.

2. In a large soup pot or Dutch oven, heat 3 tablespoons of oil over medium heat until shimmering.  Add beef and cook until browned on all sides.  Add more oil if necessary. Remove beef from pot.

3. Reduce the heat to medium low and add chopped carrots, diced bell pepper, onions, and garlic.  Sauté until they begin to soften.

4. Add the paprika, caraway, and marjoram, and stir constantly for 1 minute until fragrant.

6. If broth becomes too thick, add more beef broth or water to thin. Broth should be thick like gravy.

7. Ladle into individual bowls to serve and sprinkle with parsley.  Enjoy!