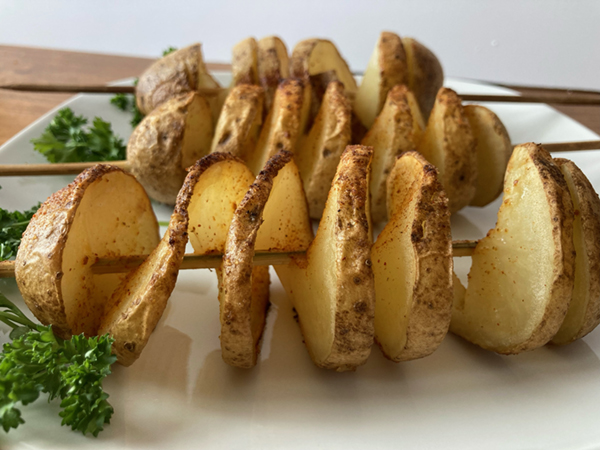 Easy baked Mexican potato chips only use four ingredients and come together in a matter of a few minutes. We’ll also show you how to spiral cut your potatoes and thread them on a bamboo skewer to make them extra fancy.

In Mexican culture, just like America, potato chips are a popular Mexican snack. They’re enjoyed with a meal or just any time to help fulfill cravings of something to munch on, as well as craving for something salty.

Baked Mexican Chips on a Stick

Baked Mexican chips on a stick are simple to make with just three basic ingredients. And they look like fancy street food when you thread them onto a bamboo skewer to cook and serve. They just represent delicious and fun all the way around.

We recommend using medium to small potatoes when making this baked Mexican Potato Chips recipe. The idea of threading them onto a skewer is one of visual appeal.

And when you do, you’ll want them to stand up by themselves rather than flopping to one side and becoming crushed. Using medium or small potatoes allows them to maintain their strength and the visual appeal of being threaded on the bamboo.

Did you know that potato chips sold in Mexico often come with a packet of salsa? We would think that to be true of tortilla chips but are intrigued about salsa being a typical side of potato chips too. It’s all the more reason for you to want to whip up a side of salsa.

I’ve never really been a fan of Pringles, so I’m probably not the best one to give an unbiased opinion of Mexican layered dip potato chips. I love potato chips, don’t get me wrong.

I just don’t care for Pringles. To me they’re like eating the instant mashed potato version of the real homemade mashed potatoes. I’d just rather have the real thing. Have you tried the Pringles Mexican Layered dip potato chips and liked them?

How a Mexican snack became an American staple

In the last 10 years, research shows that more Americans have shifted to eating more Mexican cuisine. We tend to eat more tortillas and corn chips now than we used to. Potato chips tended to be the number one snack food item sold.

Homemade Mexican Potato Chips recipe is made by using Russet potatoes and spiral slicing or thin slicing them and then threading them on a bamboo skewer for baking. Season them with taco seasoning and salt for added flavor. Bake in the oven until they’re a nice, golden brown.

This recipe takes about 10 minutes of prep time to get ready.

This recipe is estimated to yield 2 servings.

Following are some recipe variations based on Mexican potato chips, that you also might enjoy learning about.

To make this dish, use sweet potato chips for the base. Then pile on all your favor healthy Mexican nacho toppings such as beans, cheese, guacamole, tomatoes, avocados, Pico de Gallo, and more. Place it in the oven long enough to melt the cheese and heat it through. Then serve and enjoy.

Lime can be used as a cooling agent, so what better to pair it with than hot sauce. Potato chips and hot sauce, along with a squeeze of lime make for a tasty snack that can become addictive. Have you tried it?

Just like in the United States, there are leading potato chip brands in Mexico too. They are, Sabritas, Barrel, Ruffles, and Simba. They come in thin fried and various flavors as well as thicker cuts and kettle chips. Sweet potato chips can also be found on Mexican grocery store shelves.

Have you tried the Mexican Chicken Tomato Flavored Lay’s potato chips? They’re from China, which seems a bit strange since the highlighted flavor is Mexican. Anyway, we’re told they’re supposed to taste like, well Chicken and Tomato. But the question is, do they really? And do they have that intended Mexican flair?

Mexican fries are a spin off from Mexican potato chips. They’re sensational too and they’re easy to make. See what you think!

How To Make Mexican Fries

To make Mexican fries, you’ll want to wash and prepare the potatoes. Slice them as desired and sprinkle with chili powder and corn starch. Then bake for 15 minutes in a 425F degree oven.

What To Serve Mexican Fries With

Mexican fries can be served with a variety of dishes. Here are some of our favorite dishes to pair with Mexican fries. 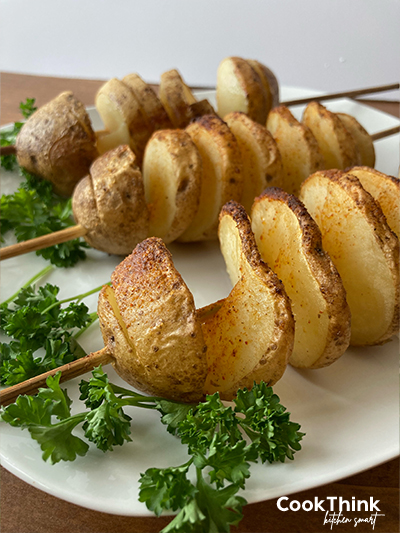 Homemade Mexican Potato Chips recipe is made by using Russet potatoes and spiral slicing or thin slicing them and then threading them on a bamboo skewer for baking. Season them with taco seasoning and salt for added flavor. Bake in the oven until they’re a nice, golden brown.
Print Recipe
Prep Time 10 mins
Cook Time 20 mins
Total Time 30 mins
Course Appetizer, vegetable
Cuisine American, Mexican
Servings 2

Find us on social media: