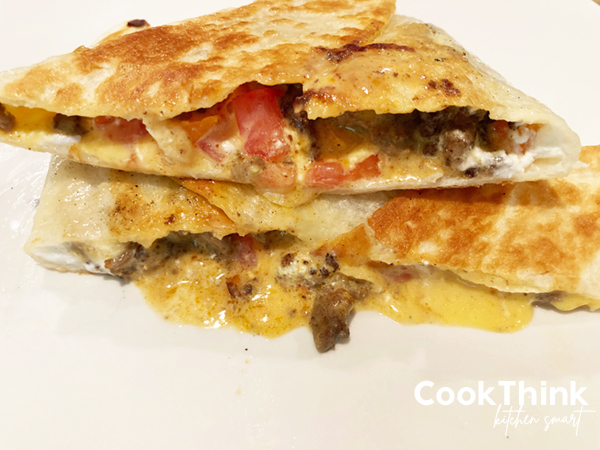 How do you grill and stuff a nacho, you say? Actually, a grilled stuffed nacho is a grilled flour tortilla shaped like a tortilla chip, and filled with ground beef, nacho cheese, red tortilla strips and sour cream.

That’s more of a way of saying that we’re going to create an extra fancy burrito and fill it with lots of delicious things and then fold it into the shape of a nacho, with three sides, making it stuffed. It resembles the once on the menu limited time Taco Bell Stuffed Nacho, but this recipe is better than lame drive through food that comes out wimpy and even soggy sometimes.

What Is In A Grilled Stuffed Nacho?

Yeah. That’s a good question. So, we’ve already solved the fact that they’re not made of nachos like the kind of corn chip nachos that most people think of when they hear the word nacho. And now you’re wondering if they’re really grilled. Saying that they’re fried might be a better explanation.

Grilled Stuffed Nachos are completely cooked before they’re assembled. But after they’re assembled, they are finished with a golden crispy crust in a frying pan and both sides are fried briefly in oil. This gives them that golden perfection and crispness that everyone wants to achieve.

How Do I Reheat A Grilled Stuffed Nacho?

Grilled Stuffed Nachos can be reheated in the microwave, but that tends to make the flour tortilla a bit soggy. If you’re just reheating one nacho, we recommend heating it in a frying pan with oil over low to medium heat, or if you have a toaster oven that works fantastic. This will allow you to maintain the crispy and golden crust.

If you’re reheating several nachos, we recommend placing them on a single layer baking sheet in the oven until heated through. A temperature of 350F for about 10 minutes should do the job.

How To Store A Grilled Stuffed Nacho

A Grilled Stuffed Nacho can be stored in an airtight container in the refrigerator for up to 4 days. Like anything else, they’re better when their fresh out of the frying pan the first time. But if you have leftovers or need to make them ahead, that can be achieved.

If making grilled stuffed nachos ahead, leave out the tortilla strips as those will just turn to mush. Using tortilla strips inside the nacho are great when eaten fresh, but they tend to get soggy after being stored.

Can I Freeze A Grilled Stuffed Nacho?

If you have leftovers or need to make these ahead, you might be wondering whether they can be frozen. Like anything they always taste better fresh, but yes, they can be frozen. If using tortilla strips inside the nacho as part of the stuffing, they tend to get soggy after being stored. Grilled stuffed nachos can be frozen in an airtight container or zipped freezer bag for up to 3 months.

Where Did The Grilled Stuffed Nacho Originate?

Where Can I Get A Giant Tortilla Shell?

Smaller flour tortilla shells work okay for this recipe. However, if you can locate some of those large, thin tortillas they can give you more room to stuff in those delicious filling ingredients, it gives a wonderful experience. We found our giant tortilla shells at Walmart in the bread isle. Even though we don’t usually shop there, when I was researching where to find them, I found that they have them.

How Does The Grilled Stuffed Nacho Maintain Its Shape?

You are going to help the grilled stuffed nacho maintain its shape. To do so, lay the giant flour tortilla shell on a flat surface. Once the cheese has been melted and the ground beef has been browned, you are ready to begin assembling the nacho and shape it. I like to begin with a thin layer of sour cream in the center of the nacho, then layer the taco meat, diced tomatoes, diced peppers and drizzle with nacho cheese.

After you have all the ingredients laid out on the tortilla shell, keeping them near the center, you can begin folding in the three sides creating a triangle. To help the edges stick together and maintain its shape, use a patting of water or oil and run a little bit around the edges. This creates sort of like a thin glue that helps the sides to stick down so you don’t lose the stuffing ingredients out into the pan.

Should I Use A Jalapeno Pepper or Bell Pepper?

You can use either one. Choose the jalapeno if you like a bit of heat in your dish. Or if you prefer a mild flavor, skip the jalapeno altogether and use green bell pepper. Of course, the pepper can be eliminated completely if you’re not a peppery kind of person.

Can I Use Pico de Gallo?

Can This Recipe Be Made Gluten Free?

How To Make A Grilled Stuffed Nacho

2. Finely dice tomato and pepper. Set aside. If you’re using Pico de Gallo this step should be skipped.

3. Brown 1 pound of ground beef in a medium frying pan until meat is cooked through. Drain any grease. Add 1 tbsp of taco seasoning or enough to achieve your desired preference of flavor. Add 2 tbsp of water and mix well.

4. You are now ready to begin assembling your nacho. To do so place a giant flour tortilla on a flat surface. Add a tablespoon of sour cream smoothing it on the inside of the shell. Add a portion of the diced tomatoes and diced peppers in the center. Combine browned ground beef and about 2 tbsp of the melted cheese mixture and tortilla strips.

5. Flatten the stuffing ingredients so that the giant flour tortilla can be folded into a triangular shaped nacho. Stick the edges shut by patting with water or oil.

6. In a frying pan heat a tablespoon of oil over medium high heat until shimmering. Add nacho. Reduce heat to medium low and heat until golden. Flip the nacho and heat the reverse side until golden.  Serve while hot and enjoy!

Grilled Stuffed Nacho Copycat Recipe is a recipe I came up with to replicate the real thing.