Cinnamon roll apple pie filling is the ultimate dish. If you love cinnamon rolls and apple pie, you are going to love this recipe. When you combine these two together, you get the ultimate dessert, breakfast, or brunch recipe.

Check out the two versions you can use to make this amazing recipe, very quickly and easily, or from scratch. We will walk you through the step-by-step process of both versions of this amazing dish.

Cinnamon rolls with apple pie filling are easy to make, and they taste fabulous. There is nothing quite like this delicious treat or dessert we can compare it to. It’s not quite an apple cobbler, but it’s also not a cinnamon roll. This recipe will melt in your mouth it’s just that good.

No matter if you are looking for quick and easy or deliciously homemade, we have both options available for you below. There’s nothing quite as delicious as this is the cinnamon roll apple pie filling dessert recipe. It’s so good, you just can’t go wrong.

There are also various ways you can bake these. You can bake them as a cinnamon roll, as a cup, or as a casserole. But don’t worry we’ll get into that more later. Let’s first begin by looking at what kitchen tools you will need, found by the ingredients needed for both versions of this delicious recipe.

How to Make Cinnamon Rolls with Apple Pie Filling

Next, take your cinnamon rolls, and cut each cinnamon roll into 4 to 6 pieces. Crumble your pieces, and place them into a lightly greased casserole dish or cast-iron skillet.

Now take your open can of apple pie filling and pour it over the top of your cut cinnamon rolls. Use a spoon to carefully toss your mixture until it is combined.

Place your creation into the oven, and preheat it to 375°F. Bake your cinnamon roll with apple pie filling for approximately 20 to 30 minutes or until it is baked all the way through.

Remove from the oven, and allow to cool for a few minutes before serving. If desired, top your cinnamon roll mixture with your canned frosting, scoop of whip cream, or ice cream before serving. Serve right away and enjoy!

To begin, make your cinnamon roll dough. Into a mixing bowl combine warm water, warm milk, sugar, and yeast together. Mix until your yeast is mostly dissolved. Allow your mixture to sit for about five minutes until it becomes frothy.

Add eggs and melted butter. Stir to combine. Next, add in flour and mix until your dough ball begins to form.

Move your dough ball from the mixer and place it into a lightly greased bowl. Cover all sides in a light coat of grease. Take a damp dishtowel and cover the bowl. Place it in a warm dry location. Allow your dough to rise until it is approximately doubled in size.

After your dough has risen, gently punch it back down and form it into a ball. Roll your dough ball flat on a lightly floured countertop. Sprinkle the top of your dough with soft butter, brown sugar, and cinnamon. Roll the dough into a long log.

Cut your cinnamon rolls from the long log. Then cut each cinnamon roll into four or six pieces. Place your cut cinnamon roll pieces into a lightly greased casserole dish or cast-iron dish. Mix with your canned apple pie filling. Cover and allow to rise.

Remove from the oven, and add frosting after your dessert has had a few minutes to cool if desired. You can also add ice cream or whipped cream before serving. Serve while warm and enjoy!

Tips from the Kitchen

The Best Frosting for Cinnamon Rolls

There are many options to choose from when it comes to frosting on your cinnamon roll apple pie filling dessert. Or should you might be wondering if you should even include frosting.

We highly recommend including a drizzle of frosting on top of your finished bake. Any kind of frosting will work well as long as it drizzles.

Not only is there a fast way and a homemade way to make your apple pie filling cinnamon rolls but you can also prepare your cinnamon rolls in various ways. Below we will take a deep dive into the different ways we can prepare this delicious dessert using the same ingredients.

Easiest way to make a Apple Pie Cinnamon Rolls – In a Casserole!

Not only can you make this dessert as a casserole form but you could also use a muffin tin and create little cinnamon roll cups filled with apple pie.

To do this you can follow the instructions outlined in the recipe card, only instead of cutting each cinnamon roll into four or six pieces, you would take the whole cinnamon roll and pat it down to form a well in a lightly greased muffin tin.

Then take a scoop of apple pie filling and place it into the center of your muffin tin before baking. Then bake your dessert and serve.

Making a two-ingredient apple cobbler is also outlined in the recipe card. This is when you take a can of cinnamon rolls and combine it with a can of apple pie filling.

Our recipe for the cinnamon roll with apple pie filling is best when enjoyed fresh from the oven. However, if you need to save them for later, or if you happen to have any leftovers, you can store them in an airtight container in the refrigerator for up to three days. We do not recommend storing any leftovers in the freezer.

Do I have to use lemon juice?

If you want to use lemon juice, a little hint of it will help to enhance the overall flavor of your delicious dessert. However it is not required that you use lemon juice.

Is it necessary to add the extra cinnamon/brown sugar mixture on top?

It is not required for you to add extra cinnamon and brown sugar to the top of your dessert. However, if you want to be sure that it is caramelized on top, and extra sweet you can go ahead and add this. However, you do not have to.

Can I use fresh apples instead of apple pie filling?

Should you cook apple pie filling before baking?

If you choose to make your own homemade apple pie filling, we strongly recommend that you allow it to cook on your stovetop before adding it to this dessert. That way your apples will be done perfectly.

Can I use canned cinnamon rolls in this recipe instead of using homemade?

Yes, if you want to make this recipe fast and very easily, you can use canned cinnamon rolls for this recipe rather than making them from scratch. But if you are like me, homemade cinnamon rolls taste much better than canned and are worth the extra effort if time allows.

Can These Apple Cinnamon Rolls Be Made Ahead of Time?

Yes, if you’re making these apple cinnamon rolls ahead of time, we recommend that you create the bread ahead of time, hold off on making it until shortly before you are ready to serve it. Allow enough time for the desert to fully bake, before you serve and enjoy.

Why you’ll Love this Recipe

There is nothing quite like apple pie combined with cinnamon rolls. It’s like taking two all-time favorites and mixing them together for the ultimate favorite dessert or even breakfast. We are so excited to share this recipe with you because we love it so much and hope that you do too.

Cinnamon roll casserole made with an apple pie filling is the ultimate dessert or even breakfast. If you’re looking for a tasty and delicious new brunch, breakfast, or dessert recipe, this one is it. Be sure to try this tasty recipe, so you can understand how delicious it really is.

Apple cinnamon roll bake is the ultimate dish. No matter if you are looking for breakfast, brunch, or dessert recipes, this is one you have got to try out. It’s so simple to make and it tastes fabulous. We hope you give it a try and love it as much as we do! 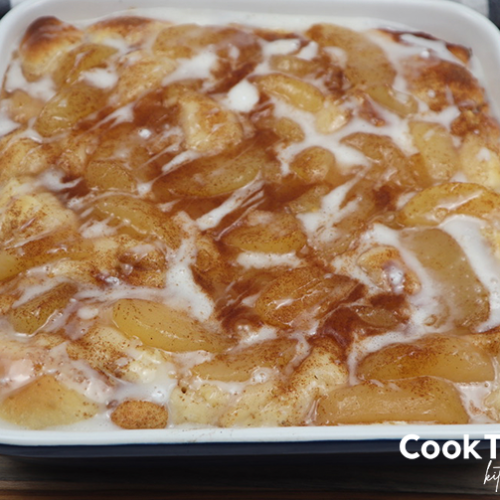