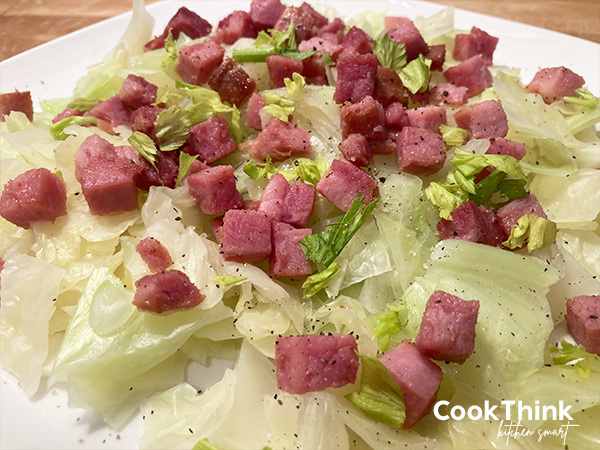 Are you looking for an easy to make recipe that is perfect to use up some leftover ham? We love this classic ham and cabbage recipe made in the slow cooker. It’s a delicious low carb meal that requires minimal preparation.

To prepare for making your delicious ham and cabbage recipe in the slow cooker, you’ll want to gather the necessary ingredients and prepare the vegetables. In our recipe we use cabbage which needs to be chopped.  If you’re adding carrots, potatoes or any other favorite vegetables, those should be prepared too.

The following ingredients are needed to make our ham and cabbage recipe in the slow cooker:

What Time Goes Into Slow Cooker Cabbage and Ham?

This recipe is quite simple to make. It requires cabbage and ham to be chopped, but other than that the slow cooker does the majority of the work. The preparation part of the work can be done in about 10 minutes and then the crockpot needs to run for about 4-6 hours to finish the job.

This Recipe is Easy and Frugal!

This recipe is so simple to make and it surely doesn’t cost much.  If you shop at a grocery store that has items priced for less such as an Aldi, you can make this meal from our recipe for about $5 total and we estimate it will feed 4-5 people.

How to Make Ham and Cabbage in the Slow Cooker

There’s something about this recipe that reminds me of my grandmother’s recipes and cooking. She loved cabbage and she loved ham. She knew how to cook both well. It has sort of an old fashioned feeling that is quaint and delightful.

Why You’ll Love This Recipe

We think there are two main reasons that you’re going to like this recipe. First of all, it is super easy. And second, it has such good flavors from butter, chicken broth and ham.

1. Place chopped cabbage in the bottom of a slow cooker.
2. Top evenly with ham.
3. Pour broth over the top and season with salt and pepper.
4. Cook on low for 5-6 hours or until cabbage is tender.
5. Stir, serve and enjoy.

Most ham is fully cooked when it is purchased. The goal of cooking this recipe is to cook the cabbage until it is tender, and to meld the wonderful flavors together. Cooking on low and slow is the key to success.

Following are common questions related to making ham and cabbage recipe in the slow cooker.

What to Serve With Crockpot Cabbage?

Ham, bacon, or kielbasa are all great protein options to cook in the crockpot with cabbage. You can also make it a one pot meal and add other vegetables such as carrots and potatoes. They cook well in a slow cooker.

How to Make This A One Pot Meal?

Make ham and cabbage recipe slow cooker a one pot meal by adding all your favorite vegetables to the mixture. Some of our favorites include carrots, potatoes, green beans, and onions. Serve with a side of corn bread.

Can You Freeze Cabbage?

How Long Does Cabbage Last in the Fridge?

Is it Better To Cook On High or Low In a Slow Cooker?

Our bias is that it’s better to cook on low in a slow cooker. Cooking on low allows the contents to become so much more tender and it allows the flavors to meld well together.

Can a Ham Hock Be Substituted For The Ham?

Yes, if you have a ham hock that you want to use instead of ham, that will work well. However, you should be advised that the flavor will be a bit more of a bacon flavor than a typical ham will provide. .

Should I Substitute Water For The Broth In This Recipe?

No, the broth adds a wonderful flavor to the dish.  It can be saved to a make bean soup or other soups.

What Type of Potatoes Should I Use?

If you’re planning to add potatoes to this ham and cabbage slow cooker recipe, that can be done. The kind of potatoes that you use doesn’t particularly matter. Red potatoes, gold potatoes, and fingerling potatoes are some good options.

How Long Does It Take To Cook Green Beans In a Crockpot on High?

Maybe you’re thinking of adding green beans to your dish and making it more of a one pot meal. One pound of green beans typically cooks on high in about 4 hours, depending on your crockpot.

Can You Overcook Green Beans In The Crockpot?

Yes, any vegetable can become overcooked in the crockpot if it cooks too long or at too high of a temperature.

Can You Make Canned Green Beans With Bacon In The Crockpot?

Can Ham Cabbage and Potato Soup be Frozen?

Yes, it can be frozen, but it is best when consumed while fresh.

Is Cabbage and Ham Dish Healthy?

Yes, our cabbage and ham recipe is healthy. A bonus is that it’s also low carb.

What to Serve With Slow Cooker Cabbage and Ham?

We like to serve hearty muffins or bread with our slow cooker cabbage and ham. A homemade batch of applesauce or fresh made pie are also delicious.

How To Store Leftovers?

Following are recipe variations for cabbage recipes cooked in the slow cooker.

If you’d like to change up this recipe, you might use other meats, include other vegetables, or try it with other seasonings.

How To Make Slow Cooker Ham and Cabbage Soup

To make slow cooker ham and cabbage soup, use our exact recipe above and add more broth to make the mixture more soupy and to your liking.

How to Make Whole Cabbage With Ham in a Slow Cooker

To make a whole cabbage with ham in a slow cooker, you can use our recipe above except instead of chopping the cabbage up, keep it whole. The cook time might need to be increased a bit in order for the cabbage to thoroughly cook.

To make crockpot kielbasa and cabbage, use our recipe above except substitute kielbasa into the recipe and use it in place of the ham.

Hearty ham cabbage and potato crockpot soup can be made by using our recipe above and adding some cubed potatoes and a bit more chicken broth to make it soupy to your liking.

If you’re a bacon lover or have bacon on hand, bacon can also be used as a way to alter this recipe.  Use bacon in addition to the ham or in place of it. If you like crispy bacon, cook it in the oven and then add it on top of the cabbage right before serving it.

If you’re into ham, you might also be into asparagus. Ham and asparagus make the perfect pairing of flavors.

Print This Crockpot Ham and Cabbage Recipe Below

Save this recipe to your recipe box.

Other Soup Recipes You May Love