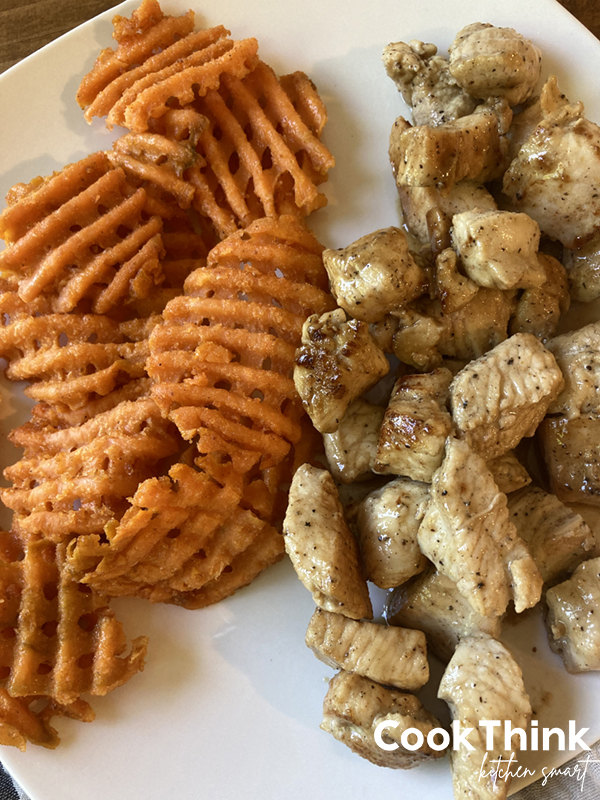 Have you been to Chick-fil-A and ordered their grilled nuggets? If so, you’ll know how delicious and juicy they are. Their flavor is such a wonderfully enjoyable flavor that’s quite unique. If you’re like us you’re interested in making them at home any time you get a craving. Now you can with our Copycat Chick-fil-A Grilled Nuggets recipe.

What Are Chick-fil-A Grilled Nuggets? What Are They Made With?

Chick-fil-A grilled nuggets are one of the healthiest items on the menu at Chick-fil-A. They’re made with real chicken just like what you’d buy at the grocery store, unlike other fast food chain chicken nuggets. Also, they’re marinaded and grilled to perfection to make them wonderfully tasty.

What You Need to Make Chick-fil-A Grilled Nuggets

How to Make Chick-fil-A Grilled Nuggets at Home

If you prefer making your grilled nuggets in an air fryer instead of in a stovetop skillet, you can do that. We’ve included the instructions below.

Step 1: Soak diced chicken breast in pickle juice and heavy cream for a minimum of 60 minutes.

Begin by soaking your bite sized pieces of chicken in the brine. You can marinate it for a minimum of 60 minutes or up to as long as overnight. Place it in an airtight container in the refrigerator while it marinates.

After you’ve brined the chicken, you’ll want to drain the brine, then pat the chicken to help dry it with a paper towel. The next step includes mixing the dry ingredients and coating the chicken with the dry seasonings.

Finally, the chicken is ready to be cooked. You can air fry the chicken by placing it in the basket and cooking it at 400F degrees for 10-23 minutes, or until its internal temperature reaches 165F degrees.

What to serve with Chick-fil-A grilled nuggets

When serving your grilled Chick-fil-A nuggets you might be thinking what do you serve this recipe with? There are so many delicious dishes that pair well with copycat Chick-fil-A grilled nuggets. Consider the following side dishes:

Our copycat instructions call for brining the chicken after it’s been diced into bite sized pieces. If you’re short on time you might be wondering if you can shortcut and skip brining the chicken. We don’t recommend that because it’s part of what makes it so delicious.

The Second Ingredient is Powdered Sugar

Yes, you read that right. Powdered sugar is part of the dry ingredient coating that goes on the chicken nuggets. It gives them that just right hint of sweet flavor.

An Ode to Chick-fil-A

Chick-fil-A has become a popular fast-food chain made popular by its chicken sandwich and other menu items that people have grown to love because of the flavor and quality. We’ve created this post for another favorite Chick-fil-A item as part of an ode to Chick-fil-A.

How Closely Does This Match the Ingredients in Actual Grilled Chick-fil-A Nuggets?

The recipe for our copycat grilled Chick-fil-A nuggets is pretty close to the actual nuggets you can purchase at the local fast-food chain. Here are their ingredients:

We’ve included the nutrition facts for Chick-fil-A grilled nuggets below. It’s an interesting comparison and one that will sell you, especially if you’re a health conscience eater.

Can you imagine taking 7 years to perfect a recipe and then perfect a cast iron grate to cook the grilled nuggets, just to make them so delicious. That’s what Chick-fil-A did.

And they used two surprise ingredients of dill pickle juice and powdered sugar. On top of that, they use real chicken breast meat to make the nuggets. No wonder they’re so delicious!

The Secret to Grilled Nuggets’ Success

Did you know that it took 7 years for Chick-fil-A to develop the recipe for their grilled nuggets? The secret to their success is in the marinade or brine that’s used to give it its flavor.

Who would have thought about using dill pickle juice. But it makes it taste delicious. And the other factor that gives the grilled nuggets success is that their one of the healthiest low-calorie options.

The Chick-fil-A grilled nuggets take you beyond low-carb foods. Sure, they’re lower carb than many other fast food menu items, but they also taste good.

You don’t need any special tools per se to make these low carb Chick-fil-A grilled nuggets. Simply using a cast iron skillet, a few mixing bowls, along with a sharp knife will be sufficient to make this recipe.

Low-carb copycat Chick-fil-A grilled nuggets are made by soaking them in a brine and then coating them in a delicious seasoning mixture. You’ll not be disappointed with the outcome of the flavor.

Why Can’t I Just Buy the Grilled Nuggets There?

You can if you prefer. But some people like to know how to make a copycat version at home for convenience and for when you get your Sunday craving.

Yes, we’re serious. Whether you need to open a new jar of pickles or you have an opened jar sitting in your refrigerator, you need dill pickle juice to make this recipe.

Using dill pickle juice in the brine is part of what helps to give these copycat nuggets their delicious flavor.

Other Methods to Cook the Nuggets

Following are cooking instructions for how to make these nuggets without an air fryer or with an air fryer.

Oven: Bake at 375F degrees for 10-15 minutes or until the internal temperature of the chicken reaches 165F degrees.

Grill: For How to grill copycat Chick-fil-A nuggets, preheat grill to 400F degrees and grill in cast iron skillet for 8-10 minutes or until the internal temperature of the chicken reaches 165F degrees.

Frying Pan: Stir continuously over medium heat until the internal temperature of the chicken reaches 165F degrees. We recommend using a cast iron skillet if available.

Following are frequently asked questions related to Chick-fil-A grilled nuggets. If you have a question that’s not asked here, feel free to drop it to us in the comments box below and we’ll be happy to answer it.

How many calories in Chick-fil-A Grilled Chicken Nuggets, without dipping sauce?

There are approximately 250 calories in the 8 piece nuggets, while the 8 piece grilled nuggets have only 130 calories.

So, which nuggets are healthier?

Chick-fil-A Grilled Nuggets Calories and Other Nutrition Facts are below. Following is a comparison of the restaurant version of Chick-fil-A’s nuggets.

How much better for me is a Chick-fil-A grilled nugget than hallowed nuggets?

We find it interesting that Chick-fil-A doesn’t bundle their nuggets in the same quantitates that other fast-food chains such as McDonald’s do. We assume that’s so consumers don’t confuse the two.

What should I dip these grilled nuggets in?

You can dip your nuggets in your favorite chicken dip. We’ve included a recipe here for copycat Chick-fil-A sauce that you might enjoy. Other options include the availability of this sauce in many grocery stores too. Barbecue sauce, ranch, and Dijon mustard are other popular favorites to dip chicken nuggets.

Are these grilled nuggets considered Keto as well?

Can I use these nuggets with a salad?

Absolutely. Chick-fil-A grilled nuggets are delicious on or with a salad. We give that idea a high recommendation.

Whole30 is a 30-day elimination diet that involves avoiding certain foods that can cause inflammation and cravings that negatively affect gut health.

Is Whole30 also Keto and low-carb?

How can I make this recipe Whole30?

To make this recipe compliant with a Whole30 diet, you’ll want to skip brining it in milk or heavy cream.

A paleo diet consists of lean meats, fish, fruits, vegetables, nuts and seeds. It uses foods that could be gathered by hunting and gathering, and limits foods that came about as a result of farming.

Is Paleo also Keto and low-carb?

How can I make this recipe Paleo?

To make Chick-fil-A grilled nuggets Paleo friendly, don’t brine the chicken in heavy cream or in milk. Skip that step.

Is this recipe gluten-free?

Yes, this recipe is naturally gluten-free.

How to Make Chick-fil-A Grilled Nuggets

Below is our ingredient list and the step-by-step instructions for how to make Chick-fil-A grilled nuggets. Follow the details to achieve the successful deliciousness. 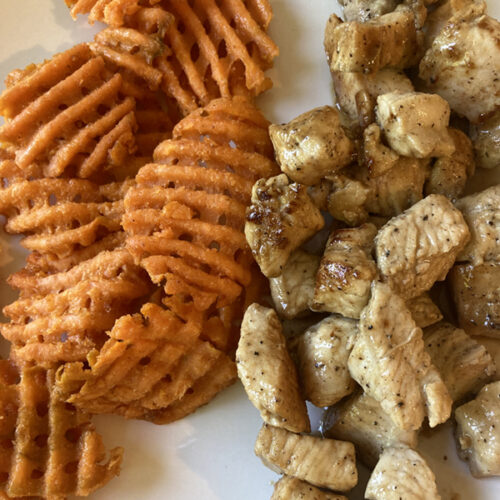