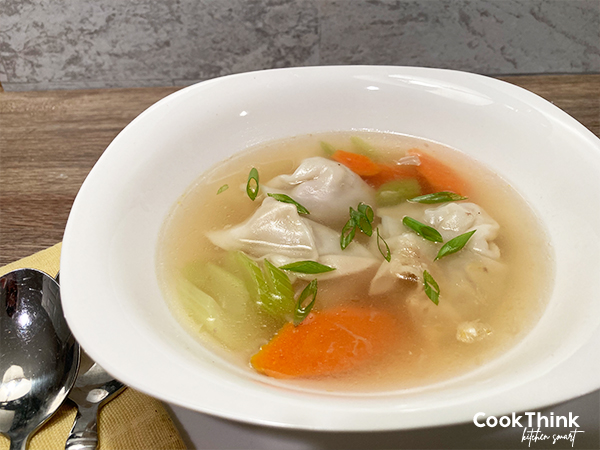 Wonton soup can be a very healthy dinner option if you’re in the mood for Asian cuisine. There is a potential for a few ingredients that you’ll want to watch for if you have food allergies. We’ve included our recipe for chicken and vegetable wonton soup below and we’ll go through all of the wonton soup nutritional information so that you come away feeling well educated.

Chinese wonton soup is a clear broth-based soup with individually hand shaped flavorful wontons stuffed with meat such as chicken, pork or shrimp. It can also include vegetables such as carrots, mushrooms, pea pods, edamame, and chopped scallions.  It is served warm plain or with Chinese noodles. Chinese wonton soup can be found in Chinese restaurants, already prepared in grocery stores, or homemade.

Wonton soup is a Chinese soup with tasty meat filled wontons, broth and vegetables. The word “wor” means “everything” in Chinese.  So, as you might guess, Wor Wonton Soup is chock full of all your favorite ingredients of anything and everything. The contents of the soup will determine the carbs in it.

We will use our Chicken and Vegetable Wonton Soup recipe below as we walk through the wonton soup nutritional information. Here is the overall label created for that specific recipe:

We have estimated that this recipe contains eight servings. For each serving, we have estimated 312 calories, 9.2g total fat, 55mg cholesterol, 412mg sodium, 32.8g total carbohydrates, and 23.0g protein.

In the chicken and vegetable wonton soup recipe below, we estimate that there are 8 servings. For each serving, there are approximately 312 calories. Each serving has approximately 9.2 g of total fat, 55 mg of cholesterol, 412 mg sodium, 32.8 g total carbohydrates, and 23.9 g protein.

There are approximately 312 calories in our wonton soup recipe below. A 2,000 calorie a day diet is used for general nutritional information.

There are many wonton soup recipes out there that are used in restaurants, grocery stores and on the web for home cooks. The main variables for wonton soup seem to be the type of meat that is used to stuff the wontons and the kinds of vegetables that are used for the soup.

For best soup safety and quality, plan to eat refrigerated soup in 2-3 days of when it was made,  or put in the freezer. Also, you want to avoid letting the soup sit at room temperature for more than two hours. If this happens, the soup should be thrown away.  Soup should be cooked at 165F degrees, which is consider a safe temperature for soup.

How Many Calories In P.F. Chang’s Wonton Soup Cup?

There are approximately 120 calories per cup in P.F. Chang’s wonton soup.

There are approximately 570 calories per serving in P.F. Chang’s wonton soup bowl.

You might plan to enjoy wonton soup at an authentic Chinese restaurant. If that is the case and you need to know the wonton soup nutritional information, you can first look at their website as many restaurants will publish this information there. If they don’t have it on their website, call them to inquire or check with your restaurant server for more information.

Following are 4 potential benefits of eating wonton soup. These benefits will depend on the ingredients used to make the soup.

The tasty wonton dumplings are stuffed with a protein. This protein might include ground chicken, pork or even shrimp. Shrimp tends to be used most often in authentic cases.

The wonton dumplings provide a few grams of carbs each, making wonton soup a great dish to boost your energy. And it’s a delectable dish that’s sure to fill you up.

The combination of the high carbs and being rich in protein will help to fuel your muscles.

Benefit #4: Wonton Soup Is Full of Vitamins and Minerals

If you look at our wonton soup nutritional label for the recipe below, you will notice that the soup contains significant vitamins and minerals such as Vitamin D, Calcium, Iron and Potassium.

The Bottom Line: Exploring the Hearty and Healthy Delights of Wonton Soup

Wonton soup is not only a deliciously filling soup, but it can also contain hearty and healthy benefits that can be enjoyed by anyone who consumes it.

Following are specific breakdown of wonton soup nutritional facts and health benefits. This analysis is based on our chicken and vegetable wonton soup recipe below.

Shrimp is a significant ingredient in authentic wonton soup that you’ll want to watch for especially if you’re allergic to shrimp. Our homemade wonton soup recipe doesn’t include shrimp for that reason and uses chicken instead.

Eating wonton soup can have adverse effects depending on your dietary restrictions. If you’re allergic to gluten, wheat, or MSG you’ll want to check the recipe ingredient labels before moving forward. Some wonton wrappers contain these items and some do not.

As far as food safety is concerned, wonton soup should be maintained at a temperature of 165F degrees or higher until it is served.  If it sits at a lower temperature outside the refrigerator at room temperature for more than two hours, the soup should be thrown away. It is at risk of making people sick.

Trader Ming’s wonton chicken and vegetable soup can be found at Trader Joe’s. It’s a fun taste test if you have the opportunity. The soup is already prepared and you just add water and heat it to enjoy. It includes delicious vegetables such as pea pods, carrots and parsley. It doesn’t quite meet the quality of an authentic Asian restaurant wonton soup, but it’s delicious for a grocery store style soup and is worth it for an already prepared meal.

The most well-known wonton shops prefer to use whole shrimp and shiitake mushrooms for wonton soup and top it with yellow chives, which are difficult to find outside of Asia. You can use green onions or scallions as the substitute for yellow chives. If you have an allergy to shrimp, you’ll want to be sure to substitute it for another protein such as pork or chicken.

Below is the recipe and instructions for a basic chicken wonton soup that includes vegetables. It begins with making homemade chicken stuffed wontons using pre-made wrappers and filling them with a flavorful ground chicken mixture. The soup is fantastic!

How To Prepare Wonton Soup: Instructions

1.  On the stovetop, heat oil in a saucepan over medium heat until the oil becomes shimmering. Add the onion, ginger and garlic and sauté until the onions are tender. Transfer to a mixing bowl.

2. In the mixing bowl add ground chicken and salt to the onion mixture and stir well.

3. Stuff the wontons by using a brush and a shallow dish of water and a lined baking sheet. Spoon ½ tablespoon of the chicken mixture onto the wonton wrapper. Brush the edges with water and fold into a triangle. Then slide your finger along the edges to seal them. Fold the edges of the left and right side toward the center and pinch to form a flower bud shape. You might also opt to keep the piece in a triangle shape.

4. To cook the wontons, combine water, salt, pepper, red wine vinegar and red pepper flakes in a large pot, bringing them to a boil. Lower to a simmer. 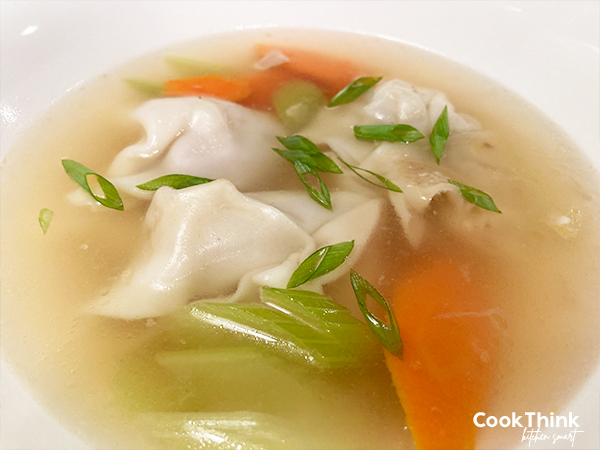