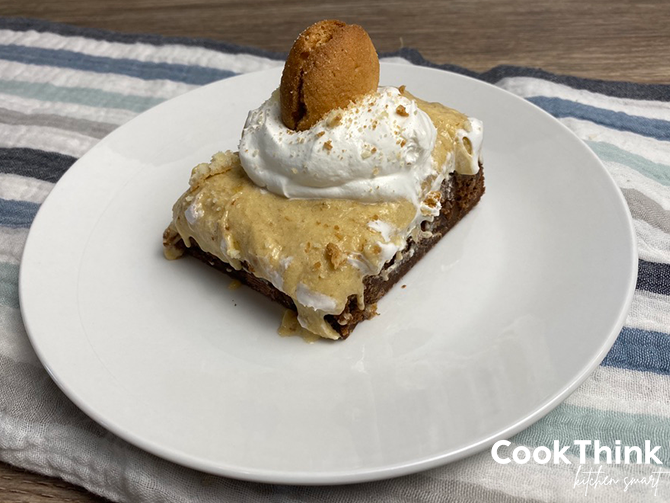 What Are Banana Pudding Brownies

Why Do I Need To Use Pudding For These

Using pudding in these brownies gives your brownies that extra something. When the pudding is included in the brownie mix they have an added softness. Then when your brownies are topped with banana pudding, it gives you the ultimate chocolate and banana flavor with a luscious creamy texture. If you enjoy the banana and chocolate combination, then banana pudding brownies are likely to be your new favorites!

What Is The Difference Between Cook & Serve Pudding And Instant Pudding

There are several different ways you can make banana pudding brownies. Most of the different ways involve different kinds of banana pudding. Cook and serve pudding is just like its name. With this pudding, you must first cook it over your stovetop before serving and enjoying it. Instant pudding is typically a pudding mix that requires a few ingredients added. Stir, then allow it to sit for a few moments before serving. With instant pudding, there is typically no cooking required at all.

What You Need To Make Banana Pudding Brownies

Let’s take a closer look at what all you will need to get in order to make these brownies. You will need:

What Type Of Pan To Use For This Recipe

The type of pan you use is up to you, and how you want the finished dish to look. A few different ideas on pans you can use are a 9×13, or a round spring form pan would probably work the best. If you would like to use another kind of pan, it will most likely work, however you may have extra batter.

Do I Need A Foil Sling For These Brownies

How to make banana pudding brownies

To make banana pudding brownies, you will want to start with your brownies. Preheat your oven to 350°F. If you would like to make your brownies from scratch, then combine all your ingredients, except for your chocolate chips, in a mixing bowl, then mix them together. Add chocolate chips and mix until combined. Pour your batter into a prepared pan and bake for 25-30 minutes. Remove from the oven and allow to cool.

Next, make your banana pudding. Start by pouring ½ cup heavy cream into a saucepan and allow it to warm over medium-low heat. Do not let the cream boil.

While the cream is warming, in a mixing bowl, combine egg yolks, and sugar. Whisk on high, until your mixture turns a light-yellow color, and is fluffy in texture. Into your mixing bowl, pour your warmed cream as you whisk on low. Mix until combined, then pour your mixture back into the saucepan.

Place your mixture back on the burner over medium heat, stirring constantly until your egg mixture reaches 160°F on an instant-read thermometer, and begins to thicken. Remove from heat and add vanilla extract, sea salt, bananas, cinnamon, and instant pudding mix.

In a clean mixing bowl, add the remaining 1 ½ cup heavy cream, and whisk on high, until stiff peaks form. Add powdered sugar and mix until combined. On low, whisk your banana mixture into your whipped cream. Mix just until it is completely combined.

Assemble by adding your pudding on top of your cooled brownies. Top with a dollop of cool whip, and vanilla wafers. Chill if desired, serve and enjoy!

Some helpful equipment to have when making this recipe would include:

Pour your brownie batter into a greased pan and bake for 20-30 minutes. If you like your brownies to be on the gooey side, it will take about 20-25 minutes, cook longer if you prefer.

In a saucepan, heat ½ cup of heavy cream over medium heat until it is warm. Do not allow it to boil. While your cream is heating, in a mixing bowl, add egg yolks and granulated sugar. Whisk until your eggs become a light yellow and your mixture is fluffy. Remove your cream from the heat and pour it into your mixing bowl. Whisk together on low, until combined. Pour your entire mixture back into the saucepan.

Once your brownie has been cooked and mostly cooled, and your banana pudding is prepared, it is time to assemble your dessert. Start by adding a layer of banana pudding on top of your brownie. Next place scoops of cool whip throughout the top of the brownie. Top with vanilla wafers and cookie crumbs if desired.

Place your banana pudding brownies in the fridge and allow for them to cool if desired.

Once chilled, slice the brownies into pieces and serve. This dessert can be enjoyed warm or cold. Enjoy!

If you want to add additions, there are several things you could add.

A great topping for banana pudding brownies is to top them off with vanilla wafers. You can crumble them up, or simply place cookies on top. These will help to add depth to your flavors.

If you like nuts, you could add some nut crumbles to the top. These help to add extra taste and textures.

Another idea to add to your banana pudding brownies, would be to add a hot fudge drizzle, or chocolate shavings to add extra appeal.

This recipe is pretty straightforward, in that each element is pretty simple to prepare. The most complicated portion is the banana pudding. If you would like to substitute the banana pudding for a simpler option, a great alternative is to purchase a packet of instant banana pudding from the store, mix it up according to the package instructions, and add banana slices to it. Then add it on top of your fresh brownies. If you are looking to simplify things, even more, you could even use a boxed brownie mix, in place of the brownie recipe from scratch.

Due to the banana pudding containing dairy, you will want to be sure to store these brownies in an airtight container in the fridge or freezer. They may be stored in the fridge for three to five days, or in the freezer for up to three months.

Tips for the best brownies with banana pudding

Tips For A Successful Banana Pudding

There are a lot of different ways you could choose to make these banana pudding brownies. A few substitutions are also delicious. Below are a few ideas for you to mix things up a little bit.

Replacing your brownies with blondies makes a delicious combination as well. To make these simply use the above recipe, remove your cocoa powder, add 1 cup brown sugar, and only include a total of 1 ½ cup granulated sugar. If your mixture is too runny, you may also need to add a touch more flour. You may also want to substitute your chocolate chips for white chocolate chips.

To make banana pudding cookies, you can easily swap out the brownie for sugar cookies and top them with banana pudding. This combination is very tasty. Another way you could make these is to add a package of instant banana pudding right into the cookie dough. This would give your entire cookie a banana flavor.

The best way to make these banana pudding cookie bars would be to prepare a blondie or sugar cookie as your base. Then top it off with banana pudding, cool whip, and crushed wafers.

For this recipe, you will bake your brownies as instructed, then, once your pudding is made, you will take chunks of brownies, and mix them into your pudding. This works best if you layer the pudding in a fancy container, with pudding, cool whip, vanilla wafers, and brownie chunks each making up layers. This version of the dessert works best when it is served chilled.

To make this delicious variation, you can prepare it two ways. The first is to prepare it as above, only add chopped strawberries to the top of each serving. The other version, which is my favorite, is to make your brownies as instructed above. Then chop up fresh strawberries and bananas and set them aside. Prepare the cheesecake filling from our Strawberry Crunch Cheesecake Cone recipe, then combine this together. To assemble, take your brownie layer first, then top it with your cheesecake filling, and then add a layer of freshly chopped strawberries and bananas. This makes the most AMAZING dessert you will ever taste!

What are banana pudding brownies?

Banana pudding brownies can be made in a variety of ways. In this post, the name refers to a layer of homemade brownies, topped without a delicious banana pudding recipe, then followed by the cool whip and crushed vanilla wafers.

How many brownies does the recipe yield?

This recipe makes about twelve brownies if you cut three rows across, and four long.

Can I use another pan size?

Yes, this recipe can also make two 8×8 pans, or you can make a thicker brownie using one large springform pan.

Can I use other pudding mixes?

Yes! Other great pudding mixes to use are vanilla and chocolate. These will also give you a delicious result!

Can you freeze banana pudding brownies?

Yes, banana pudding brownies can be frozen in an airtight container for up to three months.

How long do they last?

Can I store my brownies in the refrigerator?

Yes! Storing your brownies in the fridge is the best option.

Can I frost these brownies?

Yes, you can frost the brownies, however, if you choose to do this, I would recommend adding a box of instant banana pudding right to your brownie mix, instead of having frosting and pudding on top of your brownies.

Why I Created Banana Pudding Brownies

I love brownies. Sometimes I get tired of eating the same plain brownies, even though they are delicious. I tried making brownies topped with homemade banana pudding, and it was so good! If you like bananas and chocolate, you will enjoy this combination.

Why I Love This Recipe

This recipe reminds me of a sunny afternoon. The warmth and sunshine and savory flavors of the banana pudding paired with the rich sweetness of brownies is a delicious combination that is hard to compete with.

How soon can I make these brownies

Now that you know how to make these brownies, it is time to get started on your creation! Before you start, you will want to make sure you have all the necessary ingredients, then get busy creating!

Banana pudding brownies add a delicious twist on your normal brownie dessert. Adding the extra flair makes this average dessert, an elegant one. Try out this recipe and let us know what you think about it!

If You Liked This Recipe, Please Share The Love And Pin It!