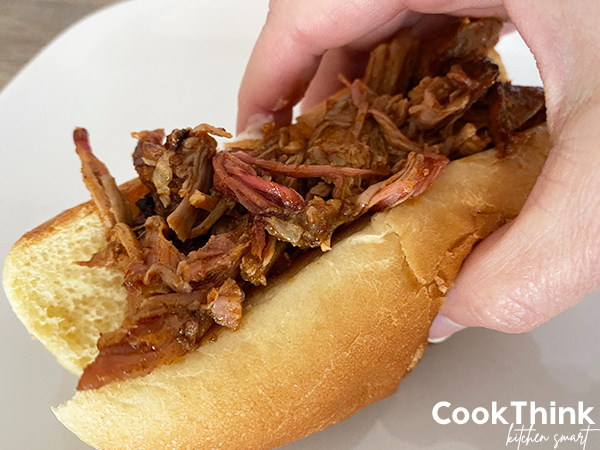 Johnny’s French Dip sandwich is a homemade sandwich that you can make that tastes savory and wonderful. It can be made with beef or pork, depending on your preference. We like to serve it on a good quality bun, with melted cheese and sliced onions that have been cooked low and slow with the meat in the Dutch oven. This is a recipe you’ll want to make again.

A French Dip Concentrate can be used to give meat a bold, beefy flavor. It can also help to tenderize and flavor the meat as a marinade, bringing out its full beef flavor in every bite. Being a concentrate typically means it needs to have something added to it such as water or beef broth. Using a concentrate can be a good way to go because it all-inclusive or close to being so.

Johnny’s French Dip Concentrate can be purchased in the condiments section of grocery stores such as Kroger, Meijer and Walmart. It can also be purchased in some online retailers. Their 8-ounce jugs can sometimes be found in 6 packs if you love the stuff or if you plan to serve a large group of people and need a larger quantity.

Johnny’s French Dip sandwich is like any other wonderful French dip sandwich, but it uses Johnny’s concentrate which can be found in the condiment section at participating local grocery stores. So, the reason we refer to it as Johnny’s is because it uses the Johnny’s name brand concentrate.

If you don’t have access to Johnny’s sauce concentrate, you can make your own au jus sauce by cooking your meat in the following ingredients. Once the meat is done, just serve the liquid in a dipping bowl alongside your French dip sandwiches:

Pulled pork is one of our favorite things to use to make French dip sandwiches. It is perfect roasted low and slow in the Dutch oven and is great when cooked for a day in the smoker or crockpot too. There’s something about the deliciously tenderized flavor of the meat and occasional burnt edges that is crave worthy.

French dip au jus makes for a wonderful sandwich served with a side of dip sauce or juice. One tip that we believe kicks the French dip sandwich up a notch is to serve it with the marinaded onion slices as well as melted cheese such as Provolone, Mozzarella, or Swiss cheese. To toast the bun and melt the cheese you can prepare the sandwich and then place it under the boiler for a couple of minutes, just until the cheese is melted.

According to their website, Johnny’s French Dip is described as bold and beefy. Johnny’s French Dip Au Jus Concentrate is our original restaurant recipe. Unlike powdered au jus mixes, Johnny’s combines red wine vinegar, tomato paste, onions, garlic, and Worcestershire sauce to tenderize and marinate your meat bringing out its full beef flavor in every bite.

More than just for a great French Dip Au Jus sauce, try with a slow cooked roast, in gravies or in soups and stews.

You might be wondering if Johnny’s Au Jus dip ever goes bad. It does last a long time if you place it in the refrigerator once it’s been opened. There have been some reports of folks saying that there is no use by date on the jug.  If that’s the case for you, just use a permanent marker to mark the jug with the date you open it.

Johnny’s French Dip can last for quite some time if stored properly. If it’s not yet been opened, you can store it at room temperature in a dry location.

If it’s already been opened, the refrigerator is the best place to store it. Make sure it’s marked with the date you opened it, for food safety reasons and so that you don’t keep it past its prime.

The key to making delicious Johnny’s French Dip sandwiches is to cook the meat low and slow.

2. Prepare Dutch oven by slicing onions and layering them on the bottom of your Dutch oven.

3. Unwrap the meat and season it with salt, garlic, and pepper, placing it on top of the onion layer in the Dutch oven.

4. Follow directions for Johnny’s French Dip and pour it over the meat.

6. Bake until meat is falling apart and is tender.

7. Serve Johnny’s French Dip sandwiches on a toasted bun and top with cheese. Warm the cheese until melted.

8. Serve au jus from the pot in a dipping bowl to dip your sandwich.

9. For extra flavor, add onions from the pot onto the sandwich.

Find us on social media: