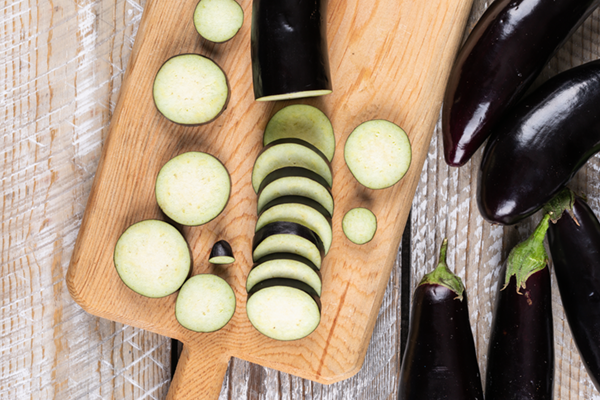 How To Cube An Eggplant: As is true with most everything, there’s more than one way to accomplish a task. And this holds true for cubing and eggplant too. Using cubed eggplant can be great for any dish prepared on top of the stove, such as soups, stews, and stir-frys. It is important to know that the cubes will decrease in moisture and in size when cooked. In order to compensate, you will want to cut the raw cubes about twice as big as you want the cooked cubes to be.

Here is our methodical approach:
Slice the eggplant into several round slices, depending on the size of the eggplant and how large you want the cubes to be.

Next, slice the rounds into strips by laying them flat and slicing horizontally across the rounds and then rotate those strips 90 degrees, slicing again to create cubes. Technically, some of the pieces will be triangles instead of cubes.

A traditional Italian eggplant can be quite a mysterious vegetable. It’s big, round, bulbous and purple. Some are afraid of what to do with one. We trust that this post has been helpful to get you headed in the right direction. And don’t be afraid to try new things!

You might also like:
Eggplant Napoleon
How To Cut Eggplant Into Slices
Do I Need To Salt Eggplant Before Cooking It?
How To Cube An Eggplant