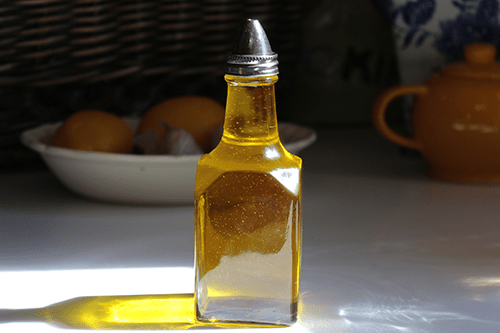 What do we mean by shimmering oil? When you look at room temperature oil, such as vegetable oil, olive oil or canola oil, it looks somewhat thick and shiny. But if you add oil to a cold pan and then heat them both at the same time, you’ll know your oil is hot and shimmering when it flows smoothly and looks like water and quickly coats the bottom of the pan. Perfection is achieved before the oil reaches its smoke point. The surface of hot and shimmering oil appears to glisten and move. It is also the point at which a small piece of food sizzles immediately when added to the pan.

There is value in making sure the oil reaches this point on many occasions because it helps to keep the pan from cooking down too much once the food is added and helps to guarantee a quick and even, thorough browning.

Shimmering oil only reaches about 275F. If by chance you mistakenly allow your oil to go beyond shimmering, it will next reach smoking point. It is unmistakable to recognize oil’s smoke point because you’ll notice little wisps of smoke rising from the pan. If your oil happens to burn – you’ll know because it will turn brown – throw it away and start over before adding any food.

You might also like:
What Does Scampi Mean?
What Is a Puree?
How To Pan Roast A Duck Breast