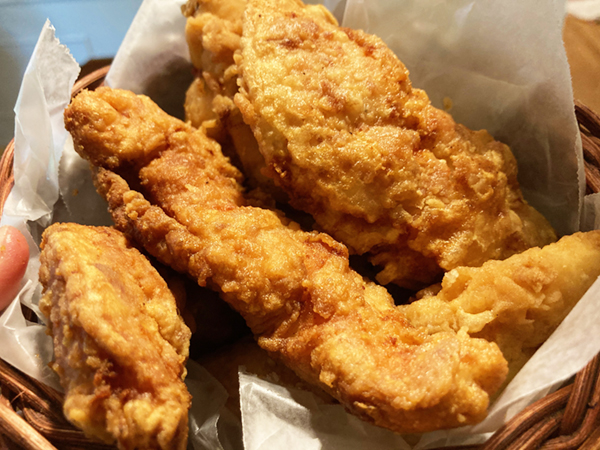 Can You Deep Fry with Olive Oil?

Yes, it is possible to deep fry items using olive oil. However, if choosing this as your frying medium, we’ll want to point out that it has more of a distinct olive flavor than that of other alternatives such as vegetable oil and canola oil that have somewhat of a bland flavor.

Is It Better to Fry Chicken in Olive Oil or Vegetable Oil?

Either type of oil can work fine for frying chicken. They can both create a nice crispy and browned exterior. The deciding factor for choosing which oil to use, if both are an option, is the flavor.

Is Olive Oil Toxic When Heated?

There are conflicting arguments about whether olive oil is toxic when heated. However, we take the stance that olive oil can be a healthy choice for cooking and doesn’t become toxic until it’s heated to its smoke point or beyond.

In fact, all cooking oil can become toxic when heated to its smoke point. When cooking oil becomes heated to a high enough temperature, they break down into toxic byproducts that are harmful when inhaled. They potentially contain carcinogens.

How Much Olive Oil Do You Use to Fry Chicken?

The amount of olive oil used to fry chicken can vary depending on the amount of chicken being cooked and the method of frying used.

Can You Fry with Extra Virgin Olive Oil?

Yes, extra virgin olive oil can be used to fry. It can also be used to deep fry foods but should be used at a lower temperature.

The smoke point of extra virgin olive oil is about 350F degrees.

Can You Fry Chicken Wings in Olive Oil?

Yes, chicken wings can be fried in olive oil. For some of the best tasting chicken wings, check out our recipe for Dallas BBQ Sticky Wings Sauce.

Why Fry Chicken in Olive Oil?

You might be wondering what the reasoning behind frying chicken in olive oil would be. And the answer to that is to pursue a healthier diet.

Compared to other cooking oil options, olive oil protects against heart disease and contains vitamins and minerals that might not otherwise be found.

Frying chicken in olive oil tends to be thought of as a healthier option for frying chicken. But the tradeoff is in the flavor which leaves a hint of olive flavor.

Can You Fry Chicken in Olive Oil Without Flour?

Yes, you can fry anything in olive oil without having to use flour. The use of flour is generally just used as a coating which becomes a crispy batter when deep fried.

How Long Does it Take to Fry Chicken in Olive Oil?

The length of time it takes to fry chicken in olive oil varies depending on the temperature of the oil as well as the thickness of the chicken.

For food safety reasons, the internal temperature of the chicken needs to reach 165F degrees before it’s considered done.

How To Fry Chicken in Olive Oil

When deep frying chicken, there are two main things to keep in mind:

1. The smoke point of olive oil is 374F – 405F degrees, so you’ll want to keep the temperature of your olive oil below 374F degrees or you risk burning it, which has the potential of creating toxic fumes.

To fry chicken in olive oil, follow our step-by-step instructions below.

6. Add the chicken to the oil in small enough batches so that there is space around each piece. Turn as it cooks. Fry until the internal temperature of the chicken reaches 165 degrees and the outside is golden brown. About 8-10 minutes if using chicken tenderloins.

Following are frequently asked questions that relate to can you fry chicken in olive oil. If you have a question that’s not answered here, please drop it to us in the comments box below and we’ll be happy to answer it.

How to fry in olive oil?

The smoke point of olive oil is 374F – 405F degrees. When frying with olive oil, you’ll want to be sure to maintain an oil temperature that is below this range.

Can you fry chicken in butter?

What oil does KFC fry their chicken in?

Kentucky Fried Chicken uses canola oil or hydrogenated soybean oil to fry their chicken. They avoid using peanut oil to allow those who have peanut allergies to still consume their fried chicken products.

What oil does McDonald’s fry their chicken in?

McDonald’s uses a canola oil blend to fry their chicken and other foods. This allows them to achieve the hot and crispy outcomes desired.

What oil does Popeyes fry their chicken in?

Popeyes is said to use pure vegetable oil to cook their chicken and fried foods in.

What oil does Chick-fil-A fry their chicken in?

What oil does Wingstop fry their chicken in?

Wingstop uses soy oil for frying and indicates that all fried items are cooked in a shared fryer so cross contamination can be a concern.

How To Fry Chicken

When deep frying chicken, there are two main things to keep in mind: 1. The smoke point of olive oil is 374F – 405F degrees, so you’ll want to keep the temperature of your olive oil below 374F degrees or you risk burning it, which has the potential of creating toxic fumes. 2. The other main thing to keep in mind is that the internal temperature of your chicken needs to reach 165F degrees for it to be considered done. Be sure to remove the chicken from the hot oil and use a meat thermometer to check the internal temperature using a meat thermometer.