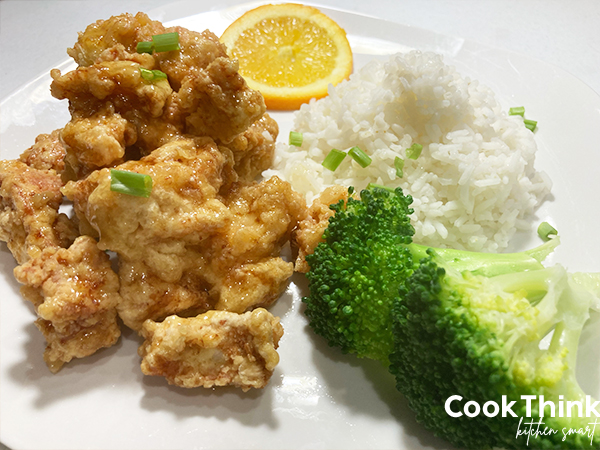 Orange Phoenix Chicken Chinese Recipe consists of deep-fried battered chicken with a delicious homemade orange glaze that tastes wonderful. Serve your chicken on a bed of rice if you like and top it with some green onion garnishes to add color and visual interest. If you like American Chinese food, we trust you’ll enjoy this recipe!

What is Phoenix in Chinese Food?

In traditional Chinese food, Phoenix refers to some type of bird, whether it specifically be duck, turkey, or chicken.

The Phoenix in American Chinese Food

The Phoenix in Authentic Chinese Food

The Phoenix in authentic Chinese foods typically refers to the presence of poultry.  In the past Squab used to be widely served at Chinese restaurants in the US, but due to cost and availability, chicken is mainly used now.

What is Dragon in Chinese Food?

Dragon in Chinese food typically refers to the presence of some kind of seafood.

The Dragon in American Chinese Food

The dragon in American Chinese food usually means that shrimp is used in the dish.

The Dragon in Authentic Chinese Food

Dragon in authentic Chinese food can mean that eel, snake, lobster, prawn or shrimp are used.

What is Dragon and Phoenix Together in Chinese Food?

Dragon and Phoenix together in Chinese food are traditionally shrimp and chicken.

How Did Dragon and Phoenix Become Staples on the Chinese Menu?

It is unknown when dragon and phoenix made their way to a Chinese menu. However they are thought to have part in the rich historical symbolism of the country, making their way to the food as well.

Some people like to make sure that their chicken is fully cooked before consuming it. A little bit later we’re going to deep fry it, but if you want to add a few minutes in the oven first, just be sure to cover your chicken so that it doesn’t dry out. If you’re taking this step, we recommend using a lower temperature such as 325F degrees and only cooking the covered chicken for about 10-12 minutes.

No Need To Marinate Chicken

Our recipe doesn’t call for the chicken to be marinated before it’s cooked for the Orange Phoenix Chicken Chinese Recipe. So, the good news is that you’ll not need to plan to allow time on the front end to marinate it. Instead, we’re creating a sauce to flavor the chicken after it’s fried.

We’re going to deep fry the chicken in this recipe to finish cooking it. To do so, you’ll want to make sure the chicken is cut into bite sized pieces and then dip it in the frying batter as instructed in the recipe instructions. Fry in the oil until the chicken is fully roasted.

The sauce is what makes the chicken so flavorful and the main ingredient in the sauce is orange juice. The key to making the glaze is heating it until it thickens. You want it to be a glaze not a watery soupy liquid.

You can glaze the chicken by simply pouring the glaze over the fully cooked chicken and tossing it to coat each piece.

Arrange the chicken on a fresh batch of rice if desired and add cut green onions on top as a garnish. Serve hot and enjoy.

2. Whisk together 1 tablespoon of cornstarch with 2 tablespoons of water and mix until a smooth paste is formed. Add to orange juice mixture and heat for 5 minutes until mixture begins to thicken. Remove from heat and add orange zest.

4. Cook Chicken pieces in batches for about 2-3 minutes until they’re golden brown.

5. Pour orange sauce over Phoenix chicken. Reserve some sauce to add to the rice. Serve warm and enjoy.

Following are some alternate recipes that related to Phoenix Chicken Chinese Recipe.

Instead of using orange juice as outlined in our recipe above, you might prefer to use mandarin juice as a substitute.

Sesame Chicken (Return of the Phoenix)

Whisk together stock, water, soy sauce, honey, vinegar, sugar, cornstarch and sesame oil in a bowl. Use 6tablespoons of the mixture to marinate the chicken. Fry chicken pieces by coating in egg white then cornstarch, flour and baking soda and then add them to oil heated to 350F. Coat cooked chicken with warm sauce, add garnishes, serve and enjoy.

Deep fry the chicken feet in 350F degree oil, until browned. Combine the remaining liquid for the braising liquid and bring to a boil. Then simmer over low heat for about 2 hours until chicken feet are tender.

To make steamed chicken feet you’ll need 1 pound chicken feet, ½ cup vinegar, ½ cup sugar, 2 quarts vegetable oil. Mix the vinegar and sugar, along with 2 quarts of water and bring to a boil. Add the chicken feet and boil for about 10-15 minutes. Heat oil to about 450F degrees and deep fry the chicken feet to golden brown for about 8-10 minutes. Remove from heat and drain the grease. Place feet back in boiling water and let simmer for about an hour until tender. Drain. Top with your favorite sauce or marinade.

We like to use a great recipe such as chicken noodle soup and adapt it by adding fresh shrimp to create a tasty dragon and phoenix soup meal.

You’ll prepare the dish by preparing the noodles, chicken and shrimp, then mixing the remaining ingredients together and sautéing briefly.