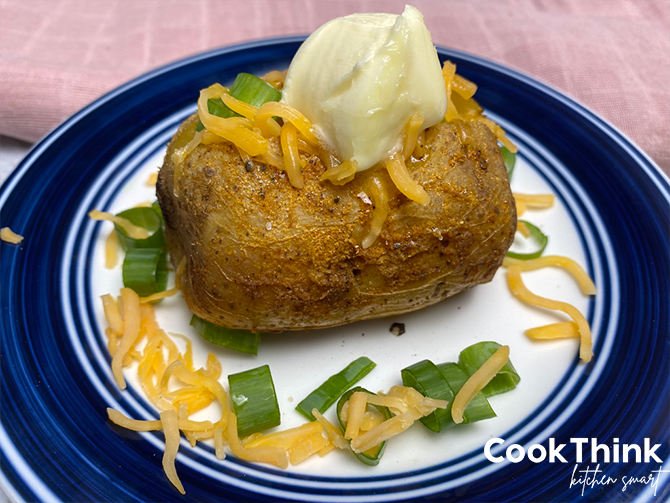 Oftentimes baked potatoes are bland, and the skin is usually left behind. This recipe for baked potatoes will have you savoring the entire baked potato, even down to the very last bite! Learn how simple it is to make this copycat recipe for Red Lobster Baked Potatoes.

A baked potato is a potato that has been cooked by baking it in a variety of ways. A baked potato is cooked all the way through so that there are no longer any crunchy parts. The potato is removed from the oven and the top cut open, then pinched slightly to allow the top to open. It is often topped in different ways and served as a main dish or a side dish.

How to Make a Baked Potato Basics

Learning the basics of how to make a baked potato is quite simple. A baked potato is a potato that is either baked in a baking dish in the oven or wrapped in foil and baked. You can bake a potato in a conventional oven, or if you have a toaster oven or air fryer with an oven feature, this will work as well. No matter how many potatoes you are cooking at a time, you will typically need to allow one hour for them to be completely baked. Later, we will walk through a step-by-step process on the specifics of how to make a baked potato. For now, let’s look at the two main ways to make a baked potato. The first and most common is in the oven, the other is in the microwave.

How to Make a Baked Potato in the Oven

There are two main ways to cook a baked potato. Probably the most common method used to make a baked potato is by using an oven. This is my personal favorite, as I prefer the texture of an oven-baked potato over a microwaved baked potato. However, both have their benefits.

How to Make a Baked Potato in the Microwave

How to Cut and Serve a Baked Potato

No matter how you cook your potato, you will want to be sure that it is cooked all the way through, meaning that the inside of your potato should be completely soft after it is cooked. Remove from the oven or microwave and allow for it to sit for a few minutes. Then, use a knife and cut one slit down the center of the top. Don’t cut all the way through the potato, only cut about halfway through it. Then with your fingers, squish in from both ends, so that you are pressing in from each “corner” of the potato. Gently squeeze so that it loosens up the center and causes the hole you cut to get larger.

A common baked potato can be served as just a potato with butter, salt, and pepper. However, if you wish to spice up your baked potato, you might also consider serving it with, butter, sour cream, cooked hamburger, bacon bits, shredded cheese, green onions, chives, salt, and pepper. Oftentimes, the more toppings you add, the tastier your potato will become!

What to Serve with Baked Potatoes

People enjoy making baked potatoes differently. We are going to share with you some tips and tricks to make the best potatoes, no matter how you hope to use them after they are baked.

Hole. Always poke a hole in your baked potato after you wash and pat it dry.

Cover. Cover your potato for at least half of the time it is baking in the oven.

Brush. Before baking, brush the outside of your potatoes with olive oil or butter.

One of the things that make Red Lobster’s baked potatoes so delicious, is that they are salt-crusted. You can easily achieve this with your own baked potatoes. The secret is quite simple. Following the step-by-step instructions below will give you the delicious taste and texture that you enjoy about Red Lobster’s potatoes.

The way Red Lobster makes their baked potatoes is quite simple. They simply create a coating of salt on the skin of their potatoes before baking them. Once baked, they taste amazing because of this extra boost of flavor.

There are a few other kinds of baked potatoes you can get from Red Lobster. Each of these are made from their technique of coating the potato in a salt seasoning before baking it. Once you know these steps, you can use this potato recipe as a springboard to create any kind you desire.

How to Make Baked Potatoes The Way Red Lobster Makes Them

The best way to make baked potatoes and get the same results the way Red Lobster makes them is to bake your potatoes in the oven and wrap each one individually in foil before baking. To do this you will need to have individual pieces of foil to wrap the potatoes and then spray each one with cooking spray.

Next, place your potatoes, with a poke hole, on the foil and brush with butter or olive oil. Sprinkle a salt mixture such as seasoning salt, Jane’s Krazy Mixed-Up Salt, or Salt Sister’s Garlic Salt Mixture, on the outside of the potato. Make sure that all sides of the potato receive the salt. Then wrap the foil tightly around the potato. Place in your oven, and bake for about an hour, or until the potato is soft.

About Baked Potatoes The Way Red Lobster Makes Them

The concept of making baked potatoes the way Red Lobster makes them is very simple. You will just need to allow time for the potatoes to fully bake in the oven. Preparing your potatoes like Red Lobster is an easy process, and worth the little bit of extra effort required to make them taste amazing.

This recipe is an easy method for making Red Lobster baked potatoes, using foil and baking in the oven.

Methods of Preparing Step by Step:

Step 2: Start by removing any sprouts, washing, and patting dry all your potatoes.

Step 3: Cut pieces of foil and spray each one with cooking spray.

Step 4: Cut a slit in the potatoes using a knife or fork. This will prevent it from exploding while you bake it.

Step 5: Place your potatoes in the individual pieces of foil. Brush with butter, and sprinkle with seasoning salt.

Step 6: Seal the foil by pressing it tightly against the potato and place it in the oven and bake for one hour or until the potato is squishy.

Step 7: Slice a hole part way down the center about halfway through the potato. Squish in from the ends. Top with butter, sour cream, shredded cheese, green onions, salt, and pepper. Serve while hot. Enjoy!

These step-by-step directions are easy to follow and require little preparation to make these delicious baked potatoes. This recipe makes a great side or main dish that is low cost and tastes amazing.

Typically, Red Lobster serves Russet potatoes as their baked potatoes. However, if you have yellow or red skins, those also make very delicious baked potatoes too.

This delicious Red Lobster Baked Potato recipe which, is coated in salt, making it taste amazing and enhances the overall flavor. It is a very easy process to prepare this dish and goes well with almost anything.

To make salty, crispy-skinned oven-baked potatoes, your process is going to be like the classic baked potato recipe. The only difference would be that you will not want to bake them in foil to get the crispy skin on the outside. To achieve skin that is crisp, but not tough, the best way is to use a baking dish with a lid. Prepare the potatoes the same as above, however, place them in a baking dish with a lid. Bake covered for 30 minutes. Then remove the lid and continue baking for an additional 30 minutes. This method will give you the delicious salty skin taste with a crispy crusted baked potato.

When you are ready to serve your baked potato, the best way is to serve with a scoop of soft butter. The butter will help to enhance the flavor of your potato and make it creamy.

The nutritional facts for the Red Lobster baked potato are as follows.

2 grams of fat, 45 grams of carbs, 5 grams of fiber, and 5 grams of protein.
Nutrition summary: There are 310 calories in 1 serving of Red Lobster Baked Potato with Butter.

How long would it take to burn off 270 calories?

The possible allergy information would be dairy if butter or sour cream were used in or on top of the baked potatoes.

How To Bake A Potato:

The basic steps for making a baked potato are to wash it and dry the potato. Place it on foil, brush in oil or butter. Then season using salt or other seasonings as desired. Bake for one hour at 425°F or until soft. Remove from oven, slice the top open, add toppings as desired, and serve while hot. Enjoy!

Cheese, butter, sour cream, green onions, chives, salt, pepper, bacon bits, hamburger, and anything else you can think of!

What is the BEST baked potato recipe?

The BEST baked potato recipe is above 🙂

How do I clean a potato before I bake it?

The best way to clean a potato is to wash it under warm water and scrub it so that all the dirt comes off. Remove the spuds. Pat it dry and then prepare it to bake.

What Type of Potato Works Best for Baked Potatoes?

The most common type of potato to use is a Russet potato, however any red and yellow skins also work great for baked potatoes too.

How do I make a quick baked potato?

To make a baked potato in under 5 minutes, you can place it in the microwave after you poke a hole in it. Then microwave for two minutes and check it. If it is not yet soft, microwave for another minute.

Do I bake potatoes with or without foil? Is foil faster?

You can bake potatoes with or without foil. The foil helps to keep the moisture inside the potato better. If you cook it in foil, you are going to end up with a nice, juicy potato. If you choose to cook it without foil, your potato will be dryer on the outside.

Why would a baked potato explode in the oven? Do I have to pierce them?

A potato contains water. As it bakes, steam builds up inside of the potato. The pressure along with temperature change can result in an exploded potato unless they have a hole poked into them or they have been pierced.

This recipe will help you make a baked potato at home that is a fraction of the cost and can top Red Lobster in deliciousness. Give this recipe a try to discover just how easy it is to make your own!

Have you made this baked potato recipe? Let us know what you think!

Related products from other restaurants: 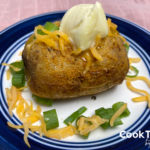 This is a recipe I came up with to replicate the real thing.