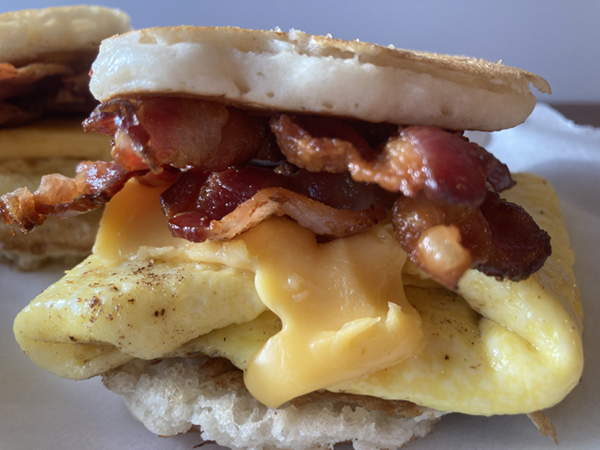 If you’re fond of McDonald’s McGriddle sandwich and you want to learn how to make it at home, we’ll show you how to make it homemade. We’ll take you step by step through the process for our Homemade McDonald’s Bacon Egg McGriddle, using our copycat recipe.

Copycat recipes can come in handy for your favorite dishes. In the case of McDonald’s Bacon Egg McGriddle, you can make a similar sandwich to the creator of the McGriddle, a fast-food genius, Tom Ryan. It’s sometimes nice to have a few on hand to quickly reheat and eat on the go. And they’re so convenient.

Following are frequently asked questions that come up regularly about our McDonald’s Bacon, Egg & Cheese McGriddle recipe. We trust you’ll find the answers helpful. If you have further questions, please leave us a message in the comments box below.

What is a McGriddle?

A McGriddle is a breakfast sandwich that is made by the fast-food chain, McDonald’s. It consists of fillings such as bacon, egg, sausage, ham, and cheese between two maple flavored griddle pancakes.

Can I make McGriddles in advance?

Yes, McGriddles can be made in advance. We recommend preparing the griddle cooked pancakes, eggs, and bacon and storing them separately. They can be reheated in a conventional oven or toaster oven as well as the microwave and assembled right before they’re served.

How do I store homemade McGriddles?

How do I reheat these?

McGriddles are best when reheated in a conventional oven or toaster oven. Wrap them in foil to maintain moisture.

If using the microwave to reheat, simply place them on a microwave safe plate and do not wrap in foil.

Cheese. American cheese or cheese that melts easily such as individually wrapped slices or processed cheese such as Velveeta is the cheese that’s traditionally used for these. However, you can use whatever cheese you’d like.

Egg Fold. Feel free to fold your egg, or don’t fold your egg. The purpose of the egg fold is to make the sandwich higher and to give it visual dimension. If you don’t want to fold your egg you can use scrambled eggs or a fried egg, any type of cooked egg will work.

Pancake Mold. We recommend using a Mason jar ring as a pancake mold. However, if you don’t have one, you can just make the pancakes without a mold or use a biscuit cutter as your mold. It all tastes the same.

The Process. We recommend making one portion of the sandwich at a time so that you don’t get overwhelmed. It’s okay to warm it in the oven when it’s done and after you’ve assembled it. There are quite a few pieces and parts here so use our step-by-step process for success.

McGriddles first came on the scene in 2003

It was in 2003 that McGriddles were introduced to fast food consumers. The McGriddle was once available all day on the all-day breakfast menu for folks who liked to eat breakfast at any time of day.

Since then, Twitter has debated if the McGriddle is better than the McMuffin. And TikTok users think they’ve hacked the DIY McGriddle. Regardless of its status on social sites, we know that the McGriddle debuted as part of McDonald’s renewed breakfast push, and as a result, the McGriddle helped make McDonald’s breakfast popular.

Whether you’d categorize yourself in the group of folks who love the McGriddle so much that you’d like to have it put back on the all-day menu, or you know that the McGriddles cakes hold some special details, and you hold a particular fondness to them, you might regard yourself as one of its fans. The McGriddle counts quite a few celebrities as fans too.

How To Make Bacon, Egg, and Cheese McGriddle

Use our step-by-step instructions below to make your successful Bacon Egg McGriddle.

Preheat oven to 400F degrees. Prepare baking sheet by lining it with aluminum foil. Place bacon slices on the aluminum foil so that they don’t overlap. Bake for approximately 10 minutes, or until desired doneness is achieved. Set aside.

Grease griddle with oil once again, keeping the temperature at 350F degrees. In a mixing bowl, mix pancake mix with water, according to package instructions. Place two mason jar rings on the griddle and pour the pancake mix inside the ring. Drizzle each with maple syrup. Let cook until the edges begin to form. Remove the ring and flip the cakes.

Prepare a cheese slice using a type of cheese that easily melts such as Kraft singles or Velveeta cheese.

Assemble your homemade Bacon Egg McGriddle using the cakes as buns and placing the bacon, egg, and optional cheese inside. If needed, warm the assembled McGriddle in the oven until heated through.

In our recipe 39g of total carbohydrates are estimated.

According to the weight watchers point calculator, our homemade Bacon Egg McGriddle has 21 points.