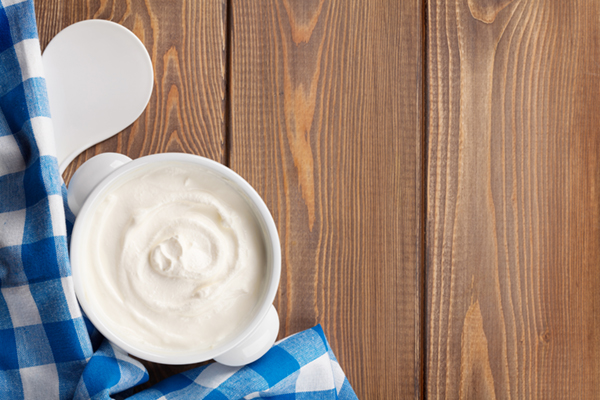 Can you freeze sour cream? The answer to this question is simple, but one you’ll want to follow recommendations as far as its uses are concerned.

Keep reading for our expert advice.

What Is Sour Cream?

Sour cream is a dairy product made from fermenting regular cream with the use of lactic acid bacteria.

Sour cream has a slightly tart flavor and has a thick consistency or substance.

Should You Freeze Sour Cream?

Can you freeze sour cream? The answer is yes; however we recommend only freezing it for the purpose of using it in baked dishes.

The reason being is simple and that is the texture changes after it’s frozen. It doesn’t have the thick, creamy aspect that you’ve come to expect from fresh sour cream.

What Happens When Sour Cream is Frozen?

The main thing that you’ll want to know is that when sour cream is frozen its consistency changes. You’ll want to be prepared for that.

So, if you’re thinking of using it for fresh items such as dip, after it’s frozen, you’ll probably want to reconsider. Sour cream that’s been frozen is best used in baked goods or baked dishes. More on that below.

How to Freeze Sour Cream

There are two main ways too freeze sour cream. You can freeze it in its original tub or in smaller portions in an ice cube tray.

The most important factor when it comes to freezing sour cream is to be sure that the sour cream has not yet gone bad. Check the expiration date as well as confirming that there are no key indicators present of your sour cream going bad.

Original Tub. Freezing sour cream in its original tub works especially well if it has not yet been opened.

You can simply transfer the sealed package of sour cream from the refrigerator to the freezer.

Zipped Freezer Bag. Using a zipped freezer bag can be another good solution for freezing a larger quantity of sour cream.

This allows for a freezer safe solution as well as putting all of your leftover sour cream in one place for use later.

Ice Cube Tray. We like to recommend flash freezing sour cream in ice cube trays then transferring the cubes to a zipped freezer bag.

This allows you to use smaller portions whenever you want to, without having to thaw the entire batch.

How to Use Frozen Sour Cream

How Long Does Sour Cream Last?

The length of time that sour cream lasts depends on how it’s stored. Here are some approximate time frames based on the storage method.

Refrigerator. Sour cream can be stored in a refrigerator that has a consistent temperature of 40F degrees or less for up to 1-3 weeks, depending on the expiration date and signs of spoilage.

Freezer. Sour cream can be stored in an airtight container in the freezer for up to 2 months.

How to Store Sour Cream

The best way to store sour cream is in an airtight container in the refrigerator. This will help to maintain freshness and shelf life.

If you have sour cream that can’t be used before it likely spoils, you can transfer it to the freezer to extend its shelf life even further. See our instructions above for how to freeze sour cream.

How Long Does It Last in the Freezer?

Sour cream can be stored in the freezer in its original packaging or in a zipped freezer bag for up to 2 months.

How Long Does Sour Cream Last After Opening It?

Sour cream will potentially last for 1-3 weeks when stored properly in the refrigerator.

Does Sour Cream Curdle When Frozen?

The texture of sour cream changes when sour cream is frozen. It becomes more soupy and is thinner in consistency.

It doesn’t curdle per se, as that would indicate spoilage since sour cream is still okay to eat after it’s been frozen.

Yes, freezing sour cream changes the texture, making it thinner and in some cases can cause it to become separated.

To help mix separated sour cream back together from the result of it being frozen, blend it in the blender or food processor for the best results.

How to Thaw Sour Cream

For how to defrost sour cream, the best and safest way is to thaw it in the refrigerator overnight. You can transfer it directly from the freezer to the refrigerator and allow it to stay there until fully thawed.

Or if you’re using it in a dish where a few frozen cubes of sour cream can be added directly, this is also a good solution for dishes like soups and stews without having to take the time to thaw it first.

Following are our top 5 tips to keep in mind when freezing and thawing sour cream.

Use sooner rather than later. For the best results, use your sour cream when it’s fresh.

Make sure it’s fresh when you’re using for fresh items or when transferring it to the freezer.

When freezing sour cream, we recommend storing it in smaller portions, such as an ice cube tray.

After you’ve thawed sour cream, don’t freeze it again after thawing it as this can cause unwanted bacteria to grow.

The best way to use sour cream that’s been frozen is to use it in baked dishes.

How To Tell If Sour Cream Has Gone Bad

Following are key indicators to look for to know if your sour cream has gone bad.

Smell. If your sour cream smells strangely soured or off in any way, you’ll want to make the assumption that it has spoiled and throw it away.

Taste. If the flavor seems off, you’ll want to assume it has spoiled.

Appearance. If the consistency or texture of your sour cream has changed without it being frozen, it’s possible that it has spoiled.

Mold. The presence of mold is also an indicator of spoilage. When mold is present, it’s safe to assume that you shouldn’t eat the food that it’s growing on.

Discoloration. When your sour cream has discoloration, such as turning green or any other color, you’ll want to discard it.

If any of these key indicators of spoilage are present, you’ll want to assume that it has spoiled and throw it away. Don’t risk eating it.

Can You Fix Separated Sour Cream By Stirring It?

You can’t really fix sour cream that’s been compromised by being frozen by simply stirring it. If it’s separated because it’s been frozen, our recommendation is to run it through the blender which will help to put it all back together, but it won’t restore the same creamy texture.

If sour cream has separated while being stored in the refrigerator, then yes, by all means simply stirring it will help mix it back together and will make it like new again.

Following are frequently asked questions that relate to can you freeze sour cream. If you have a question that’s not answered here, feel free to drop it to us in the comments box below and we’ll be happy to answer it.

Is sour cream OK after frozen?

Yes, if sour cream was frozen when it was still good, then it will still be good after it’s been frozen if handled properly.

Why is my sour cream runny after freezing?

The consistency and texture of sour cream changes after it’s been frozen. It becomes thinner and runnier. We recommend using sour cream that’s been frozen for baked dishes, rather than using it fresh.

How long does sour cream last in the fridge?

The length of time that sour cream will last in the fridge depends on whether it has been opened as well as its best if used by date.

When stored properly in the refrigerator, sour cream will generally last about 1-2 weeks after it’s been opened and before it expires.

How do you fix sour cream after it freezes?

There is not really any fix to sour cream after it freezes. The consistency will change after it’s been frozen.

We recommend putting it in the blender if the constancy becomes somewhat separated.

And it’s best to use sour cream that’s been frozen in baked goods such as pancakes or in casseroles that will be baked.

Can you use thawed sour cream for dips or toppings?

We don’t recommend using sour cream that’s been frozen in dips or toppings because of the change in consistency. However, it works great in baked good and baked dishes.

How To Freeze Sour Cream