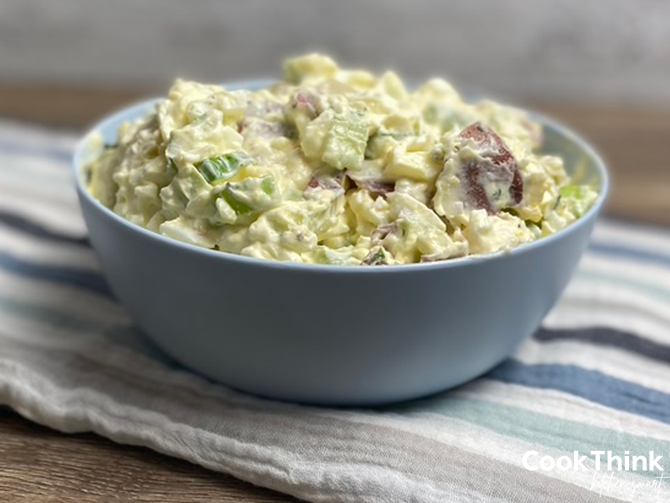 Costco potato salad is one of the few store-bought salads that is enjoyable to eat. However, today we are going to introduce you to a recipe that is better than Costco potato salad, and you can make this easily at home. Give it a try for your next gathering!

Potato salad can be made in a variety of ways. All potato salads have a base of potatoes, and most contain celery. Hard boiled eggs are often added to the potato salad, along with a dressing and a mixture of seasonings.

Other ingredients sometimes found in potato salad include celery, onion, peppers, cheese, garlic, and pickles. The sauce in potato salad is typically a mayonnaise-based sauce. Sometimes the sauce will include mustard, sour cream, vinegar, sugar, or salt. Today we are going to look specifically at Costco’s potato salad, and later give you a recipe that is even better than the potato salad you can buy at the store!

Costco’s potato salad has a bit of a mushy texture to it. The salad has a sauce that is primarily made with mayonnaise and contains a hit of mustard. Their salad also contains a bit of dill seasoning. While many people enjoy the convenience of purchasing potato salad, many people often prefer the taste of the homemade salad. There is just something about making it at home that allows it to taste so much better.

You can sometimes find potato salad from Costco in their deli section. It often comes in a plastic container that is 2.5 to 5 pounds.

The cost per container of potato salad at Costco can vary. Please visit your local store to find the exact cost.

While it is very convenient to swing by the store and pick up a package of potato salad, be aware that it does not taste nearly the same as making your own homemade salad. Making potato salad from scratch is not a difficult process, but it will take more time than simply running to the store. However, if you are intending to feed a few people, it will be worth your time and energy to make potato salad from scratch.

Potato salad is quite good for you. Let’s look at its nutritional value.

There are two easy ways to make a Costco potato salad recipe. The first recipe makes a warm potato salad, and the other makes more of a traditional potato salad that is served cold.

In a skillet, add oil and precooked bacon. Add in onion and cook stirring occasionally until onions are tender. Stir in water, vinegar, and sugar. Bring to a boil over high heat. Turn your heat down to medium and add potatoes and chives. Break your potatoes into chunks and gently toss with mixture. Cook for about 2 minutes, or until your liquid has completely evaporated. Stir with mayonnaise and serve while warm. Enjoy!

In a large pot, add potatoes and cover with water. Bring to a boil and simmer for 10-15 minutes until potatoes are tender all the way through. Drain and rinse with ice-cold water until potatoes are cool. Set potatoes aside until cooled off. In a mixing bowl, combine, celery, onion, mayonnaise, bacon, salt, and pepper. Cube cooled potatoes and then add into the mixing bowl. Gently toss until everything is coated and mixed completely. Chill, then serve and enjoy!

No matter the time of year, potato salad was always present at all family gatherings for us. My Grandma would come with her huge yellow bowl full of potato salad, and it would be gone by the end of the gathering. She would make traditional potato salad, which contained peeled and cubed potatoes, hard boiled eggs, celery, mayonnaise, mustard, salt, pepper, and sugar. It was a hit amongst our family gatherings for Christmas, Thanksgiving, Easter, and summer get togethers.

Using red skinned potatoes in potato salad, adds an extra pop of color, and cuts back on the work of pealing all your potatoes. If you used red skins, you could simply leave the peelings right on the potatoes and just dice them up. This is my preferred way of making salad, and red skins just taste so good.

In a large pot add your potatoes and cover with water. Place them over your burner and cook on high until they begin to boil. Then turn the heat down to medium-low and allow to simmer for 10-15 minutes. Once the potatoes are cooked, you should be able to easily insert a knife or fork into the center. Drain, and run under ice cold water, to cool potatoes.

In another large pan, add your eggs and cover in water. Bring to a boil and allow them to simmer for 15 minutes at a rolling boil. Remove from heat and drain water. Run under ice-cold water to cool the eggs off. Remove shells and allow to cool.

Once potatoes are chilled, cut them into cubes and add them into your bowl with sauce. Also cube chilled eggs and add to mixture. Add green onions and stir until everything is coated. Top with parsley if desired, add salt and pepper to taste. Serve chilled and enjoy!

This recipe works best when served chilled. If desired, you can also experiment with adding a bit of mustard to taste but leave out the sour cream if you try this. You can also try adding cheddar cheese to your mayonnaise and sour cream mixture if desired. It is difficult to go wrong with this delicious combination.

Potato salad is often thought of as a summer picnic treat, however potato salad is great enjoyed any time of year. It makes a great passing dish at large gatherings and potlucks.

How much is potato salad at Costco?

The cost of potato salad at Costco depends largely on your location, and the size available.

What is the best store-bought potato salad?

Store-bought potato salad has a different flavor to it than homemade does. Several brands are okay when purchased, if you doctor it up a bit when you get home.

How long is Costco potato salad good for after opening?

Typically, Costco’s potato salad is good for 3-7 days after it has been opened and stored in the fridge. Keep an eye on it, and if it starts to turn a funny color, or smells off, it is time to toss it.

What happens if you eat old potato salad?

If you eat old potato salad that has gone bad, you are likely to get food poisoning. Don’t do it, just toss it if it looks bad.

How long does store-bought potato salad last after opening?

Store-bought potato salad is usually good for 3-5 days after it has been opened and stored in the fridge. Keep an eye on it, and if it starts to turn a funny color, or smells off, it is time to get rid of it.

How long will Potato Salad last in refrigerator?

Homemade potato salad can usually be kept in the fridge for 3-5 days and still be okay. Be sure to keep an eye on and if it looks, or smells off, throw it out.

How long can potato salad be unrefrigerated?

Potato salad should be out of the fridge no more than two hours at a time due to the egg and mayonnaise content.

Why does my potato salad taste fizzy?

If your potato salad tastes fizzy it has probably started to ferment. This means it is time to throw it out.

In most cases, potato salad that is two days old should be good still. However, if you are unsure, give it the sniff and look test. If it does not pass, then pitch it.

Can you get sick from old potato salad?

Yes, you most certainly can get sick from old potato salad that has gone bad.

Can you get food poisoning from potato salad?

Yes, you can get food poising from potato salad that is bad.

Do onions cause potato salad to go bad?

Onions like any other food can only last for a few days. Most likely, the eggs and mayonnaise will go bad before your onions, however, it is possible your onions go first.

Why does potato salad need to be refrigerated?

Potato salad contains fresh foods that will spoil quickly if kept at room temperature. For potato salad to last more than two hours, it must be stored in the refrigerator.

Is it safe to reheat potato salad?

Yes, potato salad may be reheated and eaten right away.

Should I peel potatoes before boiling for potato salad?

If you are using normal baking potatoes, you are going to want to peel them before making them into salad. However, if you peel them before or after boiling is entirely a matter of preference and does not affect the outcome of your potatoes.

Making a copycat Costco homestyle potato salad using red skinned potatoes is a simple process that can easily be done for a large group. Potato salad is great for any time of the year, and makes for a great passing dish at potlucks, or even holidays. Using red skinned potatoes also adds a delicious flavor, and visual appeal to your salad. And best of all cuts back on the work to make the dish.

Using this recipe, you can make a delicious homemade potato salad that is better than Costco’s potato salad. Be sure to give this recipe a try and let us know what you think about it! 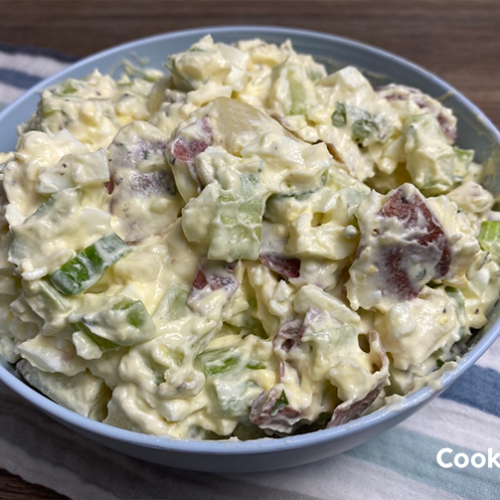