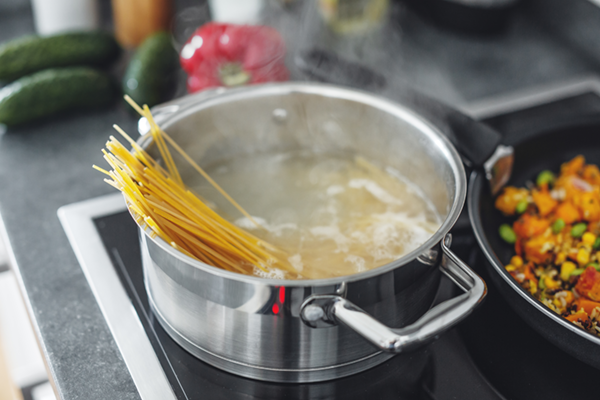 What’s The Point Of Putting Oil In Pasta Water?

None. Yes, you read that correctly. There is no point in putting oil in your pasta water. Remember, oil and water don’t mix!

Whatever bit of oil you pour into the water ends up floating on top and doesn’t mix in. It can’t mix because of the scientific properties of oil and water.  Some people, including long time Italian grandmothers, add a bit of oil to their pasta water because they believe it will help to keep their pasta from sticking together or help prevent their pot of water from boiling over.

The reality is when oil is added, it remains separated until you drain the pasta. And then at that point only a small portion, if any, sticks to a portion of the noodles. But at that point it does the opposite of what you would want it to do. If any does stick, it creates a slippery film over portions of the pasta creating a barrier so that that portion of the pasta will not allow the sauce to adhere. On the contrary, the best result is when the pasta and the sauce meld well together, giving a wonderful flavor throughout.

A Better Solution:
If you desire to keep your pasta from sticking together, a better solution is to use a nice, large soup pot to cook your noodles so that they have plenty of room to move around and won’t end up stuck together in one big blob. The only thing you need to add to your pasta water is a bit of salt for seasoning. Stir the noodles regularly, with some nice gentle motion as they cook, to help prevent them from sticking. You’ll be pleased with the result!

You might also like:
Pre-cooking Lasagna Noodles
Chickpea Pantry Pasta
What’s The Point Of Putting Oil In Pasta Water?