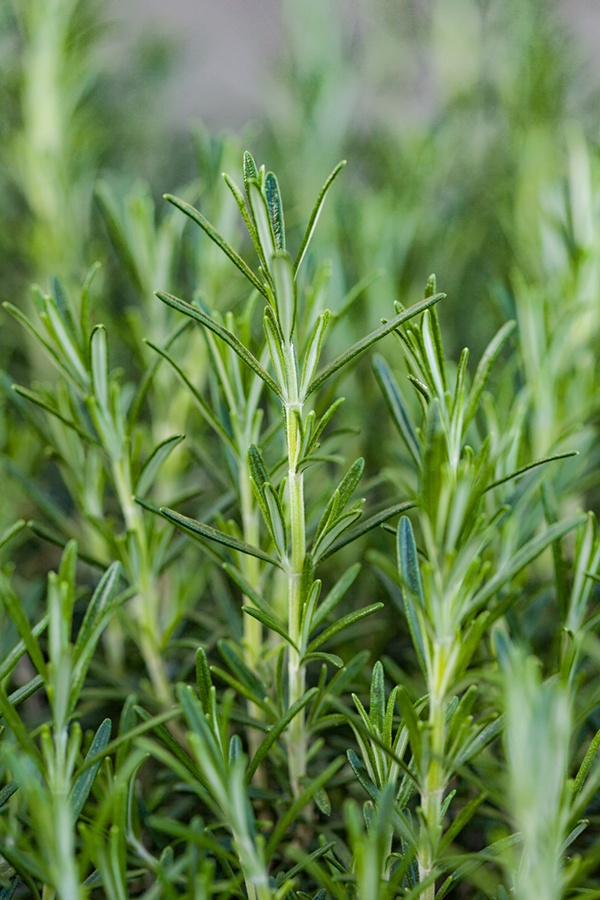 Are you in a pinch and in need of a substitute for rosemary? Maybe you’re out of fresh rosemary or dried rosemary and your recipe calls for it, but you’re not sure what to do. There are several solutions, and we’ll give you the 15 best substitutes for rosemary based on the dish you’re making.

Rosemary is a fragrant herb that’s flavorful and grows as a shrub. It looks a bit like an evergreen, and it’s used in a variety of cooking dishes as well as for medicinal purposes. Rosemary can have flowers and is known by the scientific name Salvia Rosmarinus.

What Is Rosemary Good for in Cooking?

Rosemary is a fragrant herb that’s known for its aromatic properties and can be used as a flavoring in a variety of dishes including, meats such as chicken and poultry and other meats, soups, salads, casseroles, and stews.

Dry or fresh rosemary? It makes a lot of difference! There is a significant difference in the strength of dried herbs versus fresh herbs. And the same is true with rosemary.  See the next section below to know about the best ratio for substituting dried rosemary for fresh.

Dried rosemary is great for its length of shelf life because it can be stored for a long time without losing quality.  And fresh rosemary can be wonderful for visual appeal as well as flavor.

How Do I Substitute Dried Rosemary for Fresh?

If your recipe calls for sprigs of rosemary rather than plucked rosemary leaves, you can assume that 1 sprig will equal about 1 teaspoon of fresh rosemary.

And 3 fresh sprigs will equal about 1 tablespoon of fresh rosemary.

The most important thing when thinking about what rosemary alternative to use, is that you’ll want to choose your rosemary substitute according to your recipe. In other words, choose the best complementary flavor profile.

Rosemary’s flavor is a unique blend of pine and slight lemon, mixed with a hint of woody and peppery flavors.

There is no other herb that has an exact match as far as flavor profile is concerned, however there are several herbs that can be used as a viable substitute for rosemary.

What’s a good substitute for rosemary? Following are our top 15 recommendations for rosemary alternatives when substituting either dried or fresh herbs in its place.

flavor: unique blend of pine and slight lemon, mixed with a hint of woody and peppery flavors.

When considering what to use instead of rosemary, add thyme to your list of possibilities. Thyme can be considered a number one substitute for rosemary when neither fresh nor dried rosemary is available.

When using thyme as one of your substitutes for rosemary, it is important the know that it has a bit of a distinct lemony taste, which makes it a good replacement for rosemary. It works in casseroles and sauces. But remember to go easy on thyme because it can have an unpleasant flavor if it is overused.

What can you substitute for rosemary and thyme? Oregano is a frequent seasoning used in Mediterranean cooking. Oregano is an herb that has a peppery taste. When using it as one of your substitutes for rosemary, it goes best in dishes such as casseroles, pizza, and pasta sauces.

So, the answer to, can I substitute oregano for rosemary, is yes.

Can I substitute basil for rosemary? The answer is yes. Basil has some of the same flavor properties as rosemary, including being peppery and lemony, making it a good alternative in some cases for rosemary.

The taste of basil will depend on the variety. Sweet basil is one of the most common kinds and has a fresh aroma with a hint of mint and subtle peppery flavor.  Other varieties of basil can have a spicier black licorice flavor or citrusy aspect.

Savory is an herb whose flavor gives the impression that there’s meat present. It alludes to a meaty flavor.

How about you substitute tarragon for rosemary?  Tarragon is similar in appearance to rosemary, so it makes a good alternative to rosemary in that regard.

The ideal situation to use tarragon is when it can be used in place of rosemary if you’re putting it in a dish that has the goal of a peppery flavor. Tarragon is known for its unique flavor.

Marjoram is known for its strong flavor with subtle sweetness, and it belongs to the mint family. It can be used in place of rosemary in dishes like salads, sauces, cheese plates, and to season meat.

Marjoram works great as a garnish, and when you’re using it in foods, you’ll want to try a little first so as to not overpower it with a flavor that you don’t end up liking it.

flavor: similar to oregano, but sweeter and more delicate.

Italian Seasoning is a dried herb mixture that can be bought in the store. As it says, it is great for Italian recipes. The mixture includes rosemary, thyme, parsley, pepper, oregano, and basil.

A word of caution though on using Italian Seasoning. If the recipe already calls for thyme, you’ll want to use a bit less so that you don’t have too bold of a thyme flavor.

flavor: earthy flavor, with a hint of pine, that’s a subtle sweet, with a bit of pepper.

ratio: Use Italian seasoning as a rosemary substitute to taste.

Bay leaves, grown on the Laurel tree, are fragrant leaves that are commonly used in cooking. They can be used in whole form, ground, or chopped. Bay leaves are typically purchased dry.

A bay leaf makes a good substitute for rosemary especially in meats such as chicken, turkey, fish, beef, lamb, mutton, goat, or pork.

Sage is a perennial evergreen herb that has grayish leaves and blueish flowers.  Sage is a member of the mint family and is native to the Mediterranean region.

flavor: an earthy flavor, slightly peppery, with hints of mint, and lemon.

ratio: use ½ the amount of fresh or dried sage for the rosemary, to taste.

Caraway seed, another item that has a similar flavor to rosemary, makes a good substitute for rosemary when you’re in a pinch.  Caraway seed is one of the best alternatives to rosemary and it will go well with any other seasoning you use.

Rosemary is actually a part of the mint family and has the same vibrant color. Mint can be a good substitute for rosemary, especially in dessert recipes or as a garnish where a bold mint flavor is welcome.

ratio: use mint to taste.

Did you know you can substitute parsley for rosemary? So, if you’ve had the question, is parsley a good substitute for rosemary, the answer is it can be.

Yes, parsley can be used instead of rosemary especially as a garnish or in dishes that don’t require such a bold flavor. Parsley is similar in that it has nice large green leaves. Parsley, however, has a much milder flavor than rosemary.

ratio: use parsley in place of rosemary as a garnish or to taste.

Dill is a nice mild flavored herb that’s used for a variety of cooking dishes such as pickles, eggs, marinades, and salads. Dill has a slight licorice flavor and is known for its wispy thin green leaves. Dill can be used as a substitute for rosemary in a variety of dishes.

flavor: The flavor of dill is best described as a combination of parsley, celery, and anise, with a slight licorice flavor.

ratio: use dill as a substitute for rosemary to taste.

15. Sometimes There is No Rosemary Substitute

It’s important to know that sometimes there is no substitute for rosemary and on some occasions, it’s just best to leave it out.  Feel free to choose this option and move forward if you feel that’s best for your recipe and the flavor of your cooking.

Following are our recommended substitutions for rosemary based on specific dishes.  Feel free to try out our recommendations or also use your own according to flavor preferences.

Fish. Use rubbed sage for a flavorful substitute for rosemary.

Beef. Use thyme as a substitute for rosemary on steak and other beef dishes.

Lamb, Goat, & Mutton. Use thyme, peppermint, or Bay leaf as a substitute for rosemary in lamb recipes.

Turkey, Chicken, & Poultry. Use Italian seasoning, basil, or sage as an alternative to rosemary in chicken and other poultry dishes.

Sausage Dishes. Use caraway seeds as a replacement for rosemary in sausage dishes.

Egg. Use dill or parsley for flavor and garnishes.

Mushroom Based Recipes. Marjoram works well as a substitute for rosemary in mushroom-based recipes.

Potatoes.  Use parsley, thyme, or dill as a substitute for rosemary on potatoes.

Pork. Use caraway seeds or sage as a substitute for rosemary in pork dishes.

Bread. Use dill as a substitute for rosemary focaccia bread.

Some of the health benefits of rosemary include, preventing indigestion, promoting immune function, protecting the skin, enhancing concentration and brain function, preventing cancer, relief from pain, and supporting liver and lungs.

Following are frequently asked questions that relate to substitutes for rosemary. If you have a question that’s not answered here, just drop it to us in the comments box below and we’ll be happy to answer it.

Are rosemary and thyme the same?

Why are rosemary and thyme used together?

Rosemary and thyme are often used together in cooking and baking because their flavor profiles are complementary to each other.

What herbs go with rosemary?

You can use most any herb with rosemary. Some of the most popular herbs to pair with rosemary include, oregano, thyme, basil, sage, parsley, nutmeg, cumin, star anise, and mint.

What can I use instead of rosemary?

There are a variety of herbs to use as an alternative to rosemary, including, thyme, oregano, basil, savory, tarragon, marjoram, Italian seasoning, Bay leaf, sage, caraway seed, mint, parsley, and dill. See our list above for the best substitutes for rosemary.

Can I use Italian seasoning instead of rosemary?

Yes, in some cases, using Italian seasoning instead of rosemary is a good solution.

Can you substitute basil for rosemary?

Yes, basil can be used in place of rosemary when in a pinch. However, it’s important to know that basil has a different flavor profile than rosemary.

Can you substitute lavender for rosemary?

Yes, lavender and rosemary make good substitutes for one another. You’ll want to know that rosemary has a bit stronger profile when making the substitute, so you’ll want to adjust the quantity accordingly. 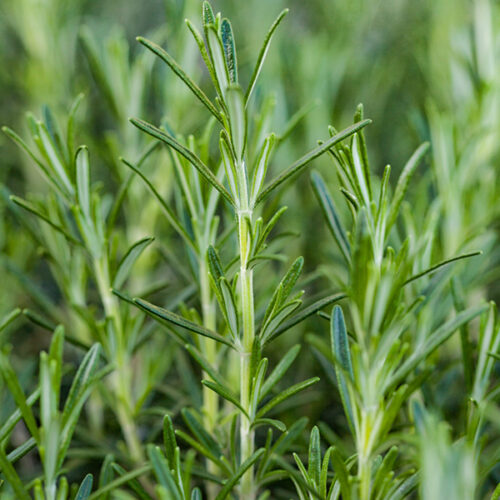