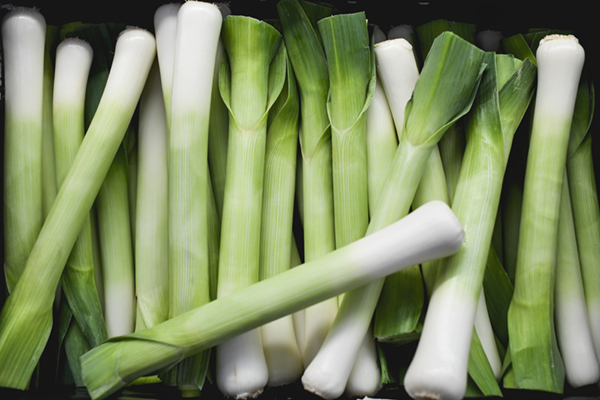 Leeks are a member of the allium family, and they are similar in appearance to a green onion, only quite a bit larger. They are a vegetable that has green leaves at the top with a white bulb at the tip.

Leeks taste a lot like an onion, however their flavor is much milder and sweeter than that of an onion. They have a richer flavor with far less intensity.

How Many Cups is 1 Leek Chopped?

One large leek is approximately equivalent to about one cup after it’s been chopped.

Are Leeks and Onions Interchangeable?

Yes, in some cases you can use leeks and onions interchangeably.  Particularly sweet onions and white onions that have a milder flavor work the best compared to the mild flavor of the leek.

Following are our top 11 recommended substitutes for leeks, which include alternatives to use in a pinch.

Using a shallot is typically the go to substitute for a leek. A shallot tastes a lot like a cross between garlic and an onion bulb. It has a delicate, sweet flavor, with a hint of sharpness and can be a perfect replacement for a leek.

Onions are stronger than leeks but subtle in flavors, especially sweet onions or white onions, making them both good alternatives for leeks. Onions work well when eaten raw or added to dishes such as salsa, guacamole, salads, and others that don’t require cooking.

Green onions are similar to spring onions or scallions. They are typically small in size compared to a leek, but have a generally more pungent flavor than a leek. A great thing about using green onions, spring onions, or scallions are that they create a similar appearance.

Garlic can have a spicy flavor when raw and somewhat of a nutty flavor when cooked. When dried and crushed into garlic powder it loses its raw flavor, making it perfect for seasoning dishes.

When using fresh garlic, avoid buying soft or spongy feeling cloves. Instead, make sure they’re nice and firm and fresh.

Using chopped celery and chopped celery leaves can work well as a substitute for leeks in dishes like soups and stews. And the great thing about using celery is that it has quite a mild flavor, with a hint of earthy, leafy, salty, and juicy.

Garlic powder can be used as a replacement for leeks in cooked dishes. The flavor of garlic powder is somewhat garlicky but is significantly different than raw garlic that’s been freshly chopped. It doesn’t include the caramel undertones that comes from roasting or sautéing garlic.

When using garlic powder as a substitute for leeks, you’ll want to think of it as a condensed flavor as only 1 teaspoon is enough to give you the same flavor as 1 leek.

The flavor of onion powder is the bold flavor of onion. When used in cooking it adds a savory flavor that’s somewhat sweet that you can’t get from fresh onions.

When determining how much onion powder to use as a substitute for leeks, you’ll want to think of it as a condensed replacement as 1 teaspoon gives enough flavor to be the equivalent of 1 leek.

We don’t typically recommend using chives as a substitute for leeks. The reason being that chives are too subtle flavor compared to leeks and don’t exude adequate flavor. Chives work well as a garnish, however.

When in a pinch, and you’re open to other flavors, you might consider these three options. And remember sometimes it’s best to just leave it out.

Fennel has a bit of a different flavor profile than that of a leek. However, it can be delicious when used to flavor soups and stews. Fennel has a mild anise or licorice flavor that can be enhanced, depending how it’s used.

If you have access to calcots, they can be used as a substitute for leeks. The Catalan calcot looks a lot like a leek, but tastes a lot like an onion. As with any replacement, use them sparingly and then add more if desired.

Wild ramps are also known as wild leeks and they’re one of the first green things to appear in the woods in the spring. When using wild ramps to flavor dishes, start small and then add more if you like them.

Substitutes for Leeks in Soup

Here are our recommended substitutes for leeks in soup, depending on the recipe: onion, shallots, garlic, Chinese chives, scallions, parsley, celery, fennel, turnips, carrots, and potatoes.

Tips When Choosing a Substitute for Leeks

Following are our top tips to consider when knowing which substitute to use for leeks. There are many leek alternatives, but which one is the best?

Skip it altogether.  The final tip, and one of the most important is to know when to skip using a leek or a leek substitute altogether. If your recipe already has a dominant flavor, or you suspect that the flavor of the substitute will not be complementary, it’s best to leave it out.

What to Look for in a Leek Substitute?

You can choose your leek substitute from our list above, according to your recipe and the complementary flavors included.

If a recipe specifically calls for leeks, you’ll want leeks. And in our opinion, shallots, spring onions, scallions, and onions are the number one best substitutes for leeks.

How to Chop/Cut Leeks According to Your Recipe

The best way to chop leeks is to first separate the green portion of the leek from white part. Some recipes might call for one portion or the other.

Then you can cut the leek in half lengthwise if desired, which will allow you to be able to wash away any grit that might be present inside the leek.  Leeks are known for trapping grit inside, and there’s nothing quite like biting into a chunk of grit to make a memorable occasion.

After the grit has been washed away, you can proceed with chopping the leek in several small pieces for your recipe.

Following are frequently asked questions regarding substitute for leeks. If you have a question that’s not answered here, feel free to drop it in the comments box below and we’ll be happy to answer it.

Can You Substitute Red Onion for Leek?

You can substitute red onion for leeks in a pinch, but you’ll want to be sure that the flavors will align okay.  Red onion tends to be much bolder and sharp in flavor compared to leeks which are creamy and mild in flavor.

How Much Onion Do I Substitute for Leeks?

Use the ratios recommended above to substitute onion for leeks.  One large leek is approximately equivalent to 1 medium sweet onion or white onion.

Yes, celery works well as a replacement for leeks. It is mild in flavor and can be used as a one-to-one substitute for leeks.

Can You Substitute Scallions for Leeks?

Yes, scallions, also known as spring onions, can be used in place of leeks. We recommend using 6-8 medium scallions as a substitute for 1 leek, which should be equivalent to about 1 cup.

Can I Use Fennel Instead of Leeks?

Fennel has a bit of a different flavor profile than leeks but can be used as an alternate substitute if desired.

Can You Substitute Leeks for Chives?

In some cases it works to substitute leeks for chives. In our list of substitutes for leeks above, however, we don’t recommend substituting chives for leeks.

What Vegetable is Similar to a Leek?

Leeks and onions are quite a bit alike. They are both part of the allium family and have similarities in appearance, texture, and flavor.

How Are Leeks Different from Onions?

Leeks have both similarities and differences from onions. They are similar in that both come from allium family.  However, leeks look like large overgrown spring onions, and have milder taste than red onions or white onions.

Following are our top 11 recommended substitutes for leeks, which include alternatives to use in a pinch.
Print Recipe
Prep Time 5 mins
Total Time 5 mins