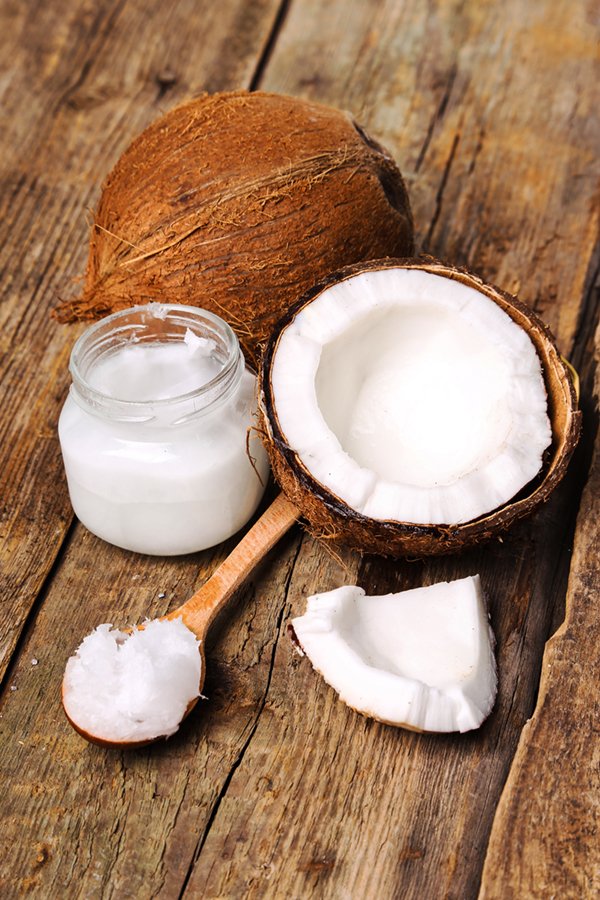 What is coconut oil?

Coconut oil is the oil processed from coconut meat and consists of 100% fat, about 80% of which is made up from saturated fat. The fat content is what gives it its firm texture whether it’s cold or at room temperature. When coconut oil is heated, it melts to a liquid form.

Coconut oil has become popular over the last several years because it is vegan and keto friendly. It’s considered a healthy, non-dairy alternative to ingredients such as butter.

The difference between refined and unrefined coconut oil is in how it’s processed as well as what it’s made from, such as dried coconut or fresh coconut.

Following are the 18 best substitutes for coconut oil for use in cooking and baking. Keep in mind that some of these ingredients will work better on some occasions than others because of their texture, flavor, and smoking point. We recommend reading through and considering all of the options before selecting the best one for your purpose.

Butter can be used as a 1:1 ratio substitute for coconut oil. Butter is best suited as a replacement in baking items such as cookies, cakes, breads, and such.

When using salted butter in place of coconut oil, it will give your food a bit more of a salty flavor than it would have if coconut oil was used. Coconut oil has a rich but bland flavor.

Regular butter, however, is a dairy product made from cow’s milk, unlike coconut oil which is plant based.

Avocado oil is one of the all-around best substitutes for coconut oil. It’s considered one of the healthier options and has a high smoke point. The flavor profile is somewhat bland with a hint of rich, just like avocado oil.

Avocado oil is a popular solution because it’s plant based, just like coconut oil. It’s also keto friendly and is a vegan option.

Vegetable oil is considered one of the more affordable options that works as a substitute for coconut oil. It’s perfect for sauteing, stir-frying, and deep frying because it has a high smoke point of 400F degrees. Vegetable oil is readily available at most grocery store locations.

Vegetable oil is made from flax seed and has an almost non-existent flavor. The flavor that is there is a slightly sweet flavor. When frying or making baked goods, vegetable oil can be a good substitute for coconut oil.

Canola oil works well for grilling and deep frying because it can be heated to a variety of different temperatures. It has quite a neutral flavor, so it works well as a substitute for coconut oil.

Canola oil is made from crushed canola seeds and is considered one of the best oils for heart health because it’s lower in saturated fats than other options.

Extra virgin olive oil has one of the lowest smoke points for the oils that work best as substitutes for coconut oil. So, it’s best for low or no heat cooking.

Extra virgin olive oil is the highest quality olive oil available because it’s extracted from olives without the use of any heat or chemicals. It’s also considered the healthiest type of olive oil.

We recommend using extra virgin olive oil in dishes that are more savory in their flavor.

Olive oil is the made from the oil extracted from olives. It can range in flavor depending on the kind of olives used. When using olive oil in place of coconut oil, we recommend tasting it first to determine whether the flavor of your dish will be altered too drastically.

In many cases, the use of olive oil will be a good substitute, as some varieties of olive oil don’t have much flavor and taste simply like oil.

We recommend using olive oil for low heat or no heat cooking such as salad dressings and pesto.

Grapeseed oil is great for use in baked things like bread or muffins. It’s made from grapeseeds which are the byproduct of wine making.

Grapeseed oil is a wonderful substitute for coconut oil because it has a neutral flavor as well as a medium to high smoke point which makes it good for a variety of cooking purposes.

Sunflower Oil is made from sunflower seeds. It has a slight but mild nutty flavor and can be used for a variety of baking, cooking, or frying needs. It works well as a substitute for coconut oil for a variety of uses.

Almond oil has a slightly nutty, mild flavor and can be a very pleasant addition to many foods. It’s a decent substitute for coconut oil.

Hemp seed oil tastes a bit nutty or somewhat like sunflower seeds. It works great for bread dips and salad dressings. It can be used in a variety of low heat or no heat dishes.

Hemp seed oil has one of the strongest flavors of the substitutes mentioned here. That’s why we don’t recommend using it in any sweet dishes or items that have a delicate flavor that would potentially become overpowered by hemp’s flavor. When in a pinch, it can be used as a substitute for coconut oil.

Hazelnut oil has a slightly sweet flavor, and we’d consider it to have hues of being roasted and nutty. It is another substitute that has more of a defined flavor than that of coconut oil. Therefore, we recommend being particular about what kinds of dishes it’s used for.

Peanut oil is made from peanuts and has a hint of a delicious nutty flavor. It’s known for the ability to deep fry things and not absorb the flavor of the other foods cooked in the oil.

Peanut oil makes a good substitute for coconut oil for a variety of low heat and high heat purposes. When using peanut oil in place of coconut oil, use a one to one ratio of equal measurements. For example, if your recipe calls for ¼ cup coconut oil, you can use ¼ cup peanut oil in its place.

Ghee tastes a lot like butter, but is often described as being a cleaner, richer version of butter itself, with a slightly nutty flavor. However, ghee performs better than butter does in high heat situations as its smoke point is 482F degrees, compared to butter that only has a smoke point of about 302F degrees.

Beef Tallow is an animal fat that’s been processed, cooked down, filtered, and allowed to harden. It has much of the same consistency as coconut oil at room temperature and cooler. Its flavor is relatively mild.

You can swap out coconut oil and use Beef Tallow in its place for things like pies and pastries.

Safflower oil has very little flavor or taste. Safflower oil can be used for a variety of cooking and baked goods. And the other great thing is it’s affordable. If you want to use safflower oil in place of coconut oil, there’s nothing wrong with that. It can be a great option.

Walnut oil is of course made from walnuts, and it has a bit of a nutty flavor. It’s best when used in uncooked items such as sauces and salad dressing or to toss with pasta, because when it’s heated it tends to become more bitter.

Shea butter is made from Shea nuts which have a very tender and sweet flesh. The flavor of shea butter is more defined and lingering than that of coconut oil. You’ll not want to use Shea butter in delicate dishes where its flavoring can become overpowering.

Applesauce can be used as a one-to-one substitute for coconut oil, or any oil for that matter, especially in baked goods like cookies, cakes, quick breads, and muffins. People like to use it because apples are healthier than oil is. It doesn’t have all the fat and is better for heart health and vegan foods.

Following are frequently asked questions that relate to substitute for coconut oil. If you have a question that’s not answered here, just drop it in the comments box below and we’ll be happy to answer it.

What can I use in baking instead of coconut oil?

One of the best substitutes for coconut oil for baking is butter. Butter can be used as a 1 to 1 substitute for coconut oil. It works well in things like cookies, cakes, pies, and pastries.

Can you substitute butter for coconut oil in baking?

Yes, butter is the perfect substitute for coconut oil in baking. It can be used as an exact or 1:1 substitute.

Can I add olive oil to melted chocolate instead of coconut oil?

Yes, you can add olive oil to melted chocolate instead of coconut oil. For the best results, melt the chocolate in a double boiler over low heat. Stir until melted completely. Remove from heat and add the olive oil. Mix until fully combined.

What oil is the most similar to coconut oil?

Any oil that is a neutral oil in flavor like grapeseed oil is the best substitute for coconut oil. See our list above for the best and most similar substitutes.

Can I use olive oil instead of coconut oil for baking?

Yes, but if you’re using a good quantity of it or the flavor of it is the main portion of the dish, we’d recommend using a substitute such as grapeseed oil that has a more subtle flavor. Both grapeseed oil and coconut oil are plant based.

Can vegetable oil be substituted for coconut oil?

Yes, but vegetable oil is missing the hint of vanilla flavoring that adds the richness to coconut oil. This should be kept in mind when selecting the best substitute for coconut oil.

What can I substitute for coconut oil on keto?

Avocado oil is a good substitute for coconut oil for those on a keto diet. And it’s plant based too so it’s suitable for vegans. Avocado oil has a high smoke point just like coconut oil so it’s good for high temperature uses such as deep frying.

How to Make Homemade Coconut Oil 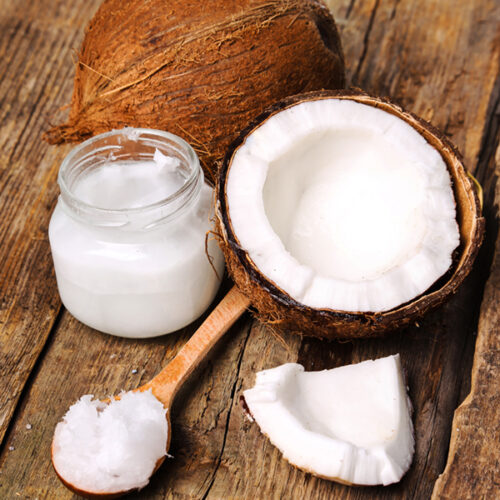 Below are 18 of the best coconut oil substitutes for cooking and baking.
Print Recipe
Prep Time 5 mins
Total Time 5 mins