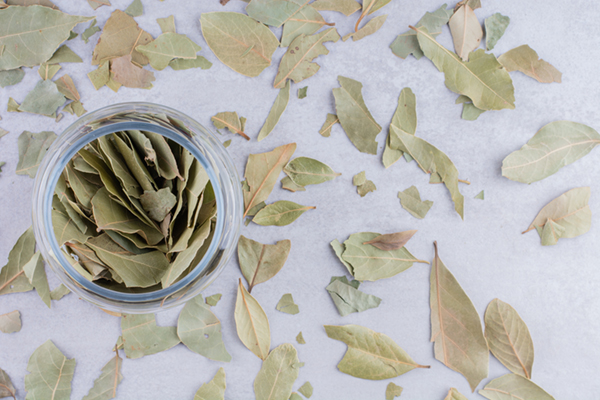 What can you use as a substitute for Bay Leaf? We’ve created a list of the 9 best options as well as a list of substitutes according to the type of dish being made. Like many herbs, Bay Leaf has a unique and complex flavor profile so knowing when to use what when choosing an alternative can be valuable.

What are Bay Leaves?

Bay Leaves typically come from the Laurel tree and are used sparingly in recipes, calling for 1,  2, or 3 leaves to add flavor to a variety of dishes including soups, stews, sauces, and curries.

Bay Leaf has flavor that’s bitter, peppery, minty, and somewhat piney. It’s a unique flavor profile that’s not found in any other herb or leaf so it can be challenging to substitute when the need arises.

What can you substitute for Bay Leaf?  Below are our top 9 recommendations for alternative replacements that can be used in a variety of recipes.

The thing to remember is if you choose to use a substitute, you should start out small in quantity to not overpower the flavor.  You can always add more.

It works well in soups, stews, and sauces. But remember to go easy on the quantity of thyme because it can have an unpleasant flavor if it is overused.

Oregano is a frequent seasoning used in Mediterranean cooking. Oregano has a peppery taste.

When using it as one of your substitutes for Bay Leaves, it goes best in dishes such as casseroles, spaghetti sauce, and pasta sauces.

How about a spice substitute for Bay Leaf? Mexican Oregano has a bit of a citrusy lemon flavor along with tones of licorice. Like the name acknowledges, these flavors can be a good fit with Mexican dishes.

It makes a good alternative in salsa dishes or chili and peppery dishes.

Can you substitute basil for Bay Leaf? The answer is yes, in the right dishes. The taste of basil will depend on the variety. Sweet basil is one of the most common kinds and has a fresh aroma with a hint of mint and subtle peppery flavor.

Other varieties of basil can have a spicier black licorice flavor or citrusy aspect and wouldn’t fair as well as a substitute for Bay Leaf. It works well in pasta dishes and some sauces.

If you’re able to access Boldo leaves, you can use them as a substitute for Bay leaves. However, you’ll want to use about half the amount your recipe calls for because they’re known to be quite strong and overpowering if used in the wrong quantity. The flavor is known as mildly bitter.

What can I substitute for Bay Leaf? Juniper berries have a slight piney flavor, with a hint of fruitiness and peppery aspects. Some compare them with the flavor of gin. They look like blueberries but taste different.

Juniper berries work well in braised dishes as they give a spicy aroma and flavor.

Rosemary is particularly good in potato dishes, as well as sauces, soups, and stews.

Red Bay Leaves tend to taste a bit like eucalyptus when they’re fresh. Just like a standard Bay Leaf, they are typically removed from soups and stews before they’re served.

Can I omit Bay Leaf? The short answer is yes. Just as it’s important to choose the best possible substitute when making a dish, it’s also beneficial to know when to simply leave it out.

If the substituted flavor is going to cause more harm than good to the dish, then it’s better to leave it out. Or, if you’re unsure whether you’ll like the outcome, then just leave it out. No Bay Leaf is better than a ruined dish.

We estimate that a fresh Bay Leaf is twice as flavorful as a dried Bay Leaf. So, when you’re substituting dried for fresh, you’ll want to use twice as many as a replacement.

The benefit of dried Bay Leaves, however, are that they have a longer length of shelf life. They can maintain their flavor in your pantry for up to 6 months, at which time they might need to be replaced due to a loss of flavor.

Bay Leaves and sage each have different flavor profiles, different appearances, and are used for different purposes.

Compared to Bay Leaves, sage has more of an earthy and peppery flavor. The two are used for different purposes.

While Bay Leaves come in handy in soups, stews, and sauces, sage is best used in stuffing, chicken, turkey, pork, potatoes, and pasta.

The Shelf Life of Bay Leaves

If you’ve had dried or crushed Bay Leaves sitting around in your spice cabinet for a while, it could be time to replenish them. We recommend replacing them every 6 months, as they lose their flavor quite quickly.

Grow Your Own Bay Leaves

Have you thought about growing your own Bay Leaves? If you use them regularly, this might be a good solution. Bay Leaves can be grown as a house plant when you grow a Bay Laurel tree.

Or if you live in a warmer climate such as zones 8-11, you can grow them outside. Having fresh Bay Leaves available to use in a variety of dishes can be a culinary delight.

Can You Substitute Fresh, Dried, and Ground Bay Leaves?

Yes, you can substitute fresh, dried, and ground Bay Leaves for one another.

They can be used interchangeably, however, the strength of their flavor will vary and so an alternative quantity might need to be used compared to what is called for in the recipe.

See our substitutions and equivalents section below.

Bay Leaves can be a good source of vitamins such as A, B6, and C. It is known to help with an immune system and relieve indigestion.

Following are popular substitutions and equivalents for fresh, crushed, and dried Bay Leaf ingredients.  The most important thing to remember is when substituting one ingredient for another to start out small and add more if needed.

Following are frequently asked questions for substitute for Bay Leaf. If you have a question that’s not answered here, just drop it to us using the comments box below and we’ll be happy to answer it.

Does a Bay Leaf really make a difference?

Yes, Bay Leaf adds a distinct flavor to any dish where it’s used.  Whether using fresh Bay Leaf or dried Bay Leaf, it can be used in cooking as a flavorful herb or spice.

What flavor does a Bay Leaf add?

Bay Leaf adds somewhat of a bitter, peppery, minty, and piney flavor to any dish it’s used in.

What is the best substitute for Bay Leaves?

The best substitute for Bay Leaves is the herb or spice that complements well with the other flavors.

Can I substitute sage for Bay Leaf?

Sage is not on our list of commonly used substitutes for Bay Leaf, however if the flavor of sage is complementary to the dish you’re making, you can use sage.

1 Bay Leaf equals how much dried?

Bay Leaf Substitutes According to Dish

What can I substitute for bay leaf in a recipe? Looking for a substitute for Bay Leaf for a specific dish? Here are some recommendations for your consideration.

Substitute for Bay Leaf in soup: We recommend using thyme, basil, oregano, or rosemary depending on the flavor profiles in your soup recipe. Choose the best option that will complement and not overpower the flavor.

Substitute for Bay Leaf in stew: We treat stew similarly to soup and recommend using thyme, basil, oregano, or rosemary as your substitute depending on the flavor profiles in your recipe.

Asian Bay Leaf substitute: Curry leaves, if you have access to them, make a good alternative for Bay Leaves in Asian dishes. It’s a common spice used in Indian and southeast Asian dishes.

What can you substitute for Bay Leaf? Below are our top 9 recommendations for alternative replacements that can be used in a variety of recipes. The thing to remember is if you choose to use a substitute, you should start out small in quantity to not overpower the flavor. You can always add more.
Print Recipe
Prep Time 5 mins
Total Time 5 mins