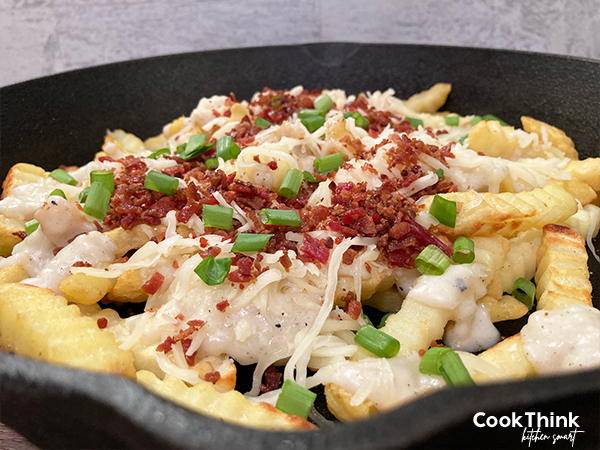 Poutine is a popular comfort food dish that originated in Quebec and can be found in fine dining restaurants as well as fast food restaurants. It is a dish of thick cut seasoned French fries topped with cheese curds and gravy. There is a correct way to pronounce this popular dish as well as a perceived to be correct way to pronounce it. Believe us, you’ll want to get it right, especially if you plan to go to Canada and order some poutine. Read on to learn how to pronounce poutine.

What is the correct way to pronounce “poutine”?

There is a debate between the native Canadians and the Americans as to how to properly pronounce the word “poutine”.  And shouldn’t one defer to the natives where culture and traditions originated the dish? That’s what we think. And if you don’t want to make an unintended embarrassing mistake in your pronunciation, you’ll want to read on to learn about how the French say it’s pronounced.

The Quebec French pronunciation is “poo-tin”. This sounds a lot like the Russian president’s name, which can help you remember it correctly. Or in other parts of Canada, “put-sin” is acceptable.

The dish of French fries and cheese curds topped with gravy is from Quebec Canada, likely in the late 1950s. It is a French-Canadian delicacy of French fries. It is the correct pronunciation and one you’ll want to be sure to master before going to Montreal and ordering this dish.

America tends to pronounce it “pu-teen”, but if you say it this way in the Montreal, Quebec, Canada area you will get laughed at because it sounds like you’re mis-pronouncing the word “prostitute” – putain. So, you don’t want to make that mistake.

Is Poutine a French Word?

The word poutine is believed to have originated from the English word pudding. In French, the word pudding is used to describe a mixture that is typically messy. It is also a combination of various foods and is slang for a mess.

What Is Poutine Made Of?

There can be many recipe variations for Poutine too. Recipe variations can include a theme of bacon cheeseburger ingredients, short ribs, barbecue chicken, or buffalo chicken to name a few.

Classic poutine is made with a layer of seasoned French fries, cheese curds, cooked onions, bacon, topped with homemade gravy and mozzarella cheese that is warm and melted.

Steps to Make It

The first step in making poutine is to prepare the French fries. You can make homemade French fries by cutting them and frying them on the stovetop. Or you might prefer to opt for a bag of frozen seasoned fries. While the fries are cooking, you’ll want to cook the bacon until it’s crisp. Then add the onion and garlic into the bacon grease and cook it until it’s soft. Finally, prepare the homemade gravy and assemble the dish.

Cook The Fries and Assemble the Poutine

After the fries and bacon are cooked, it is time to assemble your comfort food dish. Begin by placing a layer of French fries on the bottom. Next, spread the cheese curds, add some cooked bacon and top it with homemade gravy and mozzarella cheese.

The classic poutine French fry base is topped with the traditional cheese curds, gravy, bacon and mozzarella cheese.

If you love short ribs, this might be a hit for you. You can use the traditional French fry base, a layer of prepared short ribs, barbecue sauce, cheese curds and gravy.

Where Did Poutine Originate?

It is widely debated as to where poutine originated. It first came about in snack bars in Quebec in the 1950s and gained popularity from there. Over time its popularity spread from Quebec to other parts of Canada, the United States and even internationally.

Why is it Called Poutine

Poutine is called poutine because it’s thought to have originated from the word “pudding”. In French the word pudding refers to a mixture of various food items which create a mess. A very fitting name for this dish.

How To Make Poutine

For some people, poutine is the ultimate comfort food. To some it simply looks like a big mess, but to others it’s very delicious. The dish was initially more associated with fast food restaurants, food trucks and pubs. But an effort has been made to change this and begin a trend with poutine served in fine dining restaurants.

Cheese curds are created in the initial step of creating cheese. They are the lumps of milk protein that form when acid is added to the milk. Curds are not aged and have a very mild flavor.

Fresh cheese curds are rubbery and squeak between one’s teeth when they’re eaten.  The protein in the cheese is thought to be the contributing factor of the texture.

If you’re unable to obtain cheese curds for this recipe, you can substitute mozzarella cheese in its place. The dish will no longer be authentic at this point though because the cheese curds are what helps to make it original.

Is a healthy version of poutine possible?

We suppose if someone was really determined, it would be possible to make a healthy version of poutine, but the authenticity would be lost. One could use thick cut potatoes baked (not fried in oil). Fat free cheese could be used as well as more healthy toppings like green peppers, onions, mushrooms or whatever your favorite vegetables are.

Following are questions that are asked regularly about this recipe.

How To Store Poutine?

Poutine is best when eaten fresh as it becomes soggy the longer it sits. We recommend eating the dish when it is served fresh for the best flavor and texture. However, if you’re going to store it you can place it in an airtight container in the refrigerator overnight.

Can I Freeze Poutine?

We don’t recommend freezing poutine because French fries don’t freeze well. They’ll come out mushy and so will the gravy covered toppings. For best results, enjoy it fresh.

How To Reheat Poutine?

The preferred ways to reheat poutine are in the oven or in a cast iron skillet on the stovetop. Heat just until it’s warmed through.

How To Make Poutine

The process of making Poutine, a Canadian classic dish involves making or baking French fried potatoes and topping them with bacon, cheese curds and gravy. They’re heated until the cheese begins to melt and served hot.

2. While fries are baking, chop bacon and cook in a skillet until crisp. Set aside.

3. In the bacon grease, add minced onion and sauté until soft. Add garlic and cook for one minute.

7. If desired, place the fries back in the oven until the cheese begins to melt. Serve warm and enjoy!

While enjoying the dish, be sure to share with your friends your knowledge of how to pronounce poutine.

Find Us on Social Media

1 thought on “How to Pronounce Poutine Correctly”