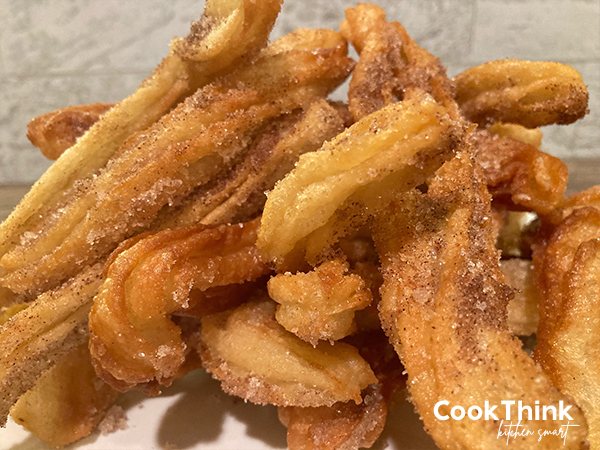 Churros are a fun snack food item that can become addicting.  They’re made by deep frying rich batter. We love to make cinnamon toast crunch churros by rolling them in a mixture of cinnamon and sugar right after they come out of the deep fryer. Our family loves them.

If you’ve never had a homemade churro, you should give them a try. The key is in the eggs. When mixing the eggs, you want to do it quickly enough so that they don’t cook and turn to scrambled eggs. If you can do that, then you’re golden.

For us, eating churros bring back particularly fond memories of summer camp. That’s where our first encounter with the delicious snack food took place. Every evening the snack shop would have a snack special and one time every summer that special would feature churros. They were not homemade, but they were still prepared in such a way that they were crisp on the outside, soft on the inside and melted in our mouth. I remember we could get them dipped in cinnamon, granulated sugar or powdered sugar. And this was long before Cinnamon Toast Crunch Churros were a thing.

What Are Cinnamon Toast Crunch Churros?

Cinnamon Toast Crunch Churros can be one of two things. It can be a churro that is rolled in cinnamon and sugar. Or, it can be the particular kind of cereal that’s made by General Mills that includes mini little churros as the cereal pieces. In this post, we’ll direct our focus to making homemade churros with a cinnamon toast crunch flavor.

Homemade churros are delicious. They are deep fried rich batter rolled in cinnamon and sugar. What’s not to like, right? Even though they’re not too healthy, they can still be enjoyed in moderation from time to time.

Is There Anything Else You Need to Know?

Below are some other frequently asked questions about making this recipe that you might want to know.

Can Cinnamon Toast Crunch Churros Be Made in Advance?

Yes, they can be made a day ahead, but they’re best when enjoyed fresh.

You can keep them for up to three days, but they’re best when enjoyed after they’ve been freshly fried.

Can I Freeze Churros?

Yes, churros can be frozen in an airtight container or zipped freezer bag for up to two months.

How Do I Store Cinnamon Toast Crunch Churros?

Churros are best when eaten fresh. We hardly ever have leftovers, but if you do, you can store them in an airtight container on the countertop for 2-3 days. Eating them sooner rather than later will provide the best flavor and texture.

You can re-heat them in the microwave for 10-15 seconds or place them in a 300F degree oven wrapped in foil, until they’re warmed through. Just be careful not to burn them with either method.

Deep frying food can be dangerous if care is not given to the frying process.  You’ll want to use a thermometer to help you maintain the recommended temperature.  If the temperature of the oil rises too high, it can cause a grease fire. To put out a grease fire, use baking soda or a fire extinguisher. Never use water.

You can alter our recipe below and make Cinnadust Churros by leaving out the sugar for dusting and use only cinnamon. It gives a savory taste, rather than a sweet flavor.

If you have these kitchen tools available to you, you will find them helpful in preparing this recipe.

Cinnamon Toast Crunch Churros are made by making a churro batter, then by deep frying that batter after it is piped into oil for deep frying. They can then be coated and rolled in your favorite cinnamon and sugar mixture.

1. In a saucepan over medium-high heat, melt butter, then add water, salt, vanilla and 1 stick of cinnamon. Bring to a boil, then remove the mixture from the heat. Remove the cinnamon stick and discard it.

2. Add the flour to the mixture and stir until smooth dough is formed, about 3 minutes. Allow the dough to cool for 15 minutes.

3. Transfer to a mixing bowl and add the egg. Stir quickly until the egg is well incorporated. Stir quickly so that the egg doesn’t cook and become scrambled eggs from the remaining heat.

4. Place the dough in a piping bag fitted with a star tip.

5. Prepare the dipping mixture by mixing the cinnamon and sugar in a shallow bowl. Set aside.

6. Heat oil in a Dutch oven or saucepan to 350F degrees. Use a candy thermometer to monitor and maintain that temperature.

7. Hold the piping bag above the oil and pipe about 6-inch lengths of dough into the hot oil. Turn regularly and allow them to cook until golden brown, about 2 minutes.

8. Transfer to paper towels to drain briefly then dip and roll them in the cinnamon and sugar mixture. Serve and enjoy your cinnamon toast crunch churros!

The cereal making company General Mills has created a Cinnamon Toast Crunch Cereal that is shaped and intended to be flavored like mini churros. We’ve read several reviews, but haven’t tasted it for ourselves yet. It seems that if you don’t shy away from sugar cereals, you might like it. If you try it, let us know what you think.

Nutrition: Double-Digit Sugar, But Worth It

The cereal has 11g of sugar for a 1 cup serving. Some claim that it’s worth it even with its higher sugar content. But is it? I used to love to eat sugary cereals when I was a kid. But not so much anymore. Sugary cereals sort of leave me feeling blah to start off the day.  I think I’d personally rather opt for a more nutritious option, but that’s just my personal preference.

You Should Probably Try It At Least Once

I read several reviews about the new Cinnamon Toast Crunch Churros cereal, and people raved about how good it was. If you don’t have allergens or dietary restrictions, they recommend you should probably try it at least once before passing judgement.

I cannot give a first-hand review of the product because I haven’t tried it. The grocery store where we typically shop does not carry this brand. But the reviews I read say it’s good. If you try it, let us know what you think.

How to Make Churro Cereal Treats

To make cereal bar treats with your Cinnamon Toast Crunch Churros cereal, you’ll need 7 cups of cereal, 10 oz bag of mini marshmallows, ¼ cup butter, 1 tsp vanilla extract. Prepare an 8×8” baking dish that is greased with cooking spray. Melt the butter and marshmallows in a saucepan over medium heat. Add the vanilla. Mix well. Add the cereal and press into the prepared baking pan. Allow it to cool. Slice into cereal bars. Serve and enjoy.

You can also use Cinnamon Toast Crunch Churro cereal to make a snack mix. Kids will love it. Just add nuts, pretzel sticks, dried fruit such as raisins or cranberries, sunflower seeds and any of your other favorite snack mix ingredients.

Can you believe that they’d make cereal that tastes like churros. It seems surreal, but it’s a reality that kids and people with a sweet tooth are sure to love.

It’s General Mills’ next adventure to bring about a new chocolate churros cereal to grocery store shelves. If you try it, we’ll be interested in hearing what you think.

We hope you enjoy our recipe for homemade churros. Give it a try and let us know what you think. 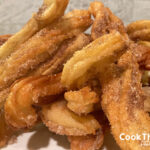