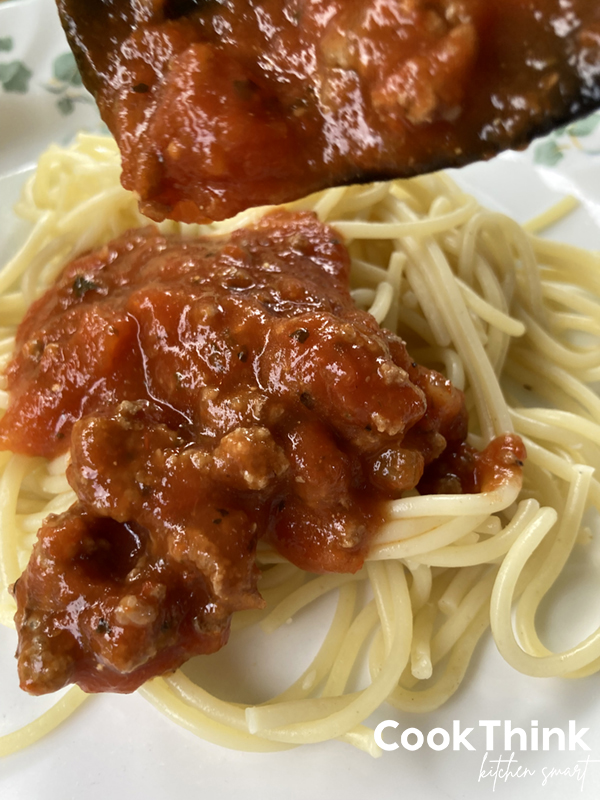 Can you freeze spaghetti?  That’s a good question. And should you freeze pasta by itself or after it’s been mixed with spaghetti sauce meatballs. If you freeze it, what’s the best way to reheat it without making it turn into mush? We’ll give you the best methods as answers for each one of these questions.

How To Store Leftover Spaghetti

Refrigerator. Spaghetti can be stored in the refrigerator at 40F degrees or less, in an airtight container for up to 4 days. After that, it should be thrown away or transferred to the freezer for longer storage.

Freezer. Stored cooked spaghetti in the freezer gives it a shelf life of up to 3 months, without compromising quality. Your freezer temperature should be set at 0F degrees or less for food safety reasons.

How To Freeze Cooked Pasta

Following are our simple step-by-step instructions for how to freeze spaghetti or any cooked pasta.

Step 1: Cook your pasta al dente
The first step in making spaghetti to freeze is to cook your pasta to the point of being al dente.

This is typically done by boiling a pan of water and adding the pasta. It should be cooked until it can be bitten but is still somewhat firm.

Step 2: Cool
Allow the pasta to cool to room temperature before moving forward with freezing. This will keep condensation to a minimum and help prevent ice crystals from forming.

Allowing the spaghetti to cool is an important step.

Step 3: Divide
Think ahead to the desired portion that will likely be used when the spaghetti is served and after it’s been frozen. Will you need enough for one serving, or four servings?

Whatever the case might be, you can divide the spaghetti into the desired portions to prepare it to be frozen.

Then, do the same with the spaghetti sauce and meatballs. Freeze for up to 3 months.

Our recommendation is to freeze spaghetti, sauce and meatballs separate for ease of reheating and serving them. However, you can freeze them altogether without a problem if needed.

How to Freeze Leftover Spaghetti with Sauce or Meatballs

Freezing leftover spaghetti with sauce or meatballs is the easiest way to avoid wasting spaghetti and storing it long term when needed. Just follow our step-by-step instructions above.

How to Thaw and Use Pasta

The best way to defrost frozen spaghetti is to transfer to fridge overnight, add to boiling water, remove before mushy.

How to thaw and use pasta, then dump into boiling water or microwave

How Long Does Frozen Spaghetti Last?

Spaghetti that has been frozen and handled properly can last up to 3 months. It’s recommended to freeze spaghetti at a temperature of 0F degrees or less for the best results.

How To Reheat Frozen Spaghetti and Meatballs

To reheat frozen spaghetti and meatballs, first you’ll thaw them in the refrigerator overnight simply by transferring them from the freezer to the refrigerator and leaving it in its packaging.

To reheat frozen spaghetti, you can use a saucepan on stovetop for sauce and boiling water for the noodles. Or as an alternative, baking the spaghetti in an oven safe dish is another effective method.

Following are frequently asked questions for can you freeze spaghetti. If you have a question that’s not answered here, feel free to drop it in the comments box below and we’ll be happy to answer it.

How long can you freeze spaghetti?

Spaghetti can be frozen in an airtight container for up to 3 months.

How to freeze cooked pasta without sauce?

Freezing cooked pasta without sauce is one of the best ways to freeze it, that way when it comes time to reheat it, it can be done more simplistically.

To freeze cooked pasta without sauce just place it in a freezer safe zipped bag or freezer safe container that has a lid that seals. Date and label the package and place it in the freezer for up to 3 months.

How to reheat frozen pasta?

There are many ways to reheat frozen pasta, but one of our favorite ways is to place the already cooked, frozen noodles in a pot of boiling water for just a few minutes.

Don’t let them stay there too long as they could potentially become too mushy. Strain them as you normally would, add any sauce, and serve.

Can you freeze cooked spaghetti noodles?

Can you freeze spaghetti with sauce on it?

Instead, you can reheat it on the stovetop or in the oven in an oven safe baking pan.

Can you freeze spaghetti in Ziploc bags?

Yes, using freezer safe zipped bags is one of the best ways to freeze spaghetti. This will allow you to flatten the bag for good freezer storage as well as for thawing the spaghetti more rapidly later on.

Can you freeze spaghetti by itself?

Yes, freezing cooked spaghetti or cooked pasta noodles works quite well because it has a high starch content it freezes well.

Should I package the pasta and the sauce separately?

Can you freeze spaghetti sauce in glass jars?

No, we don’t recommend freezing spaghetti sauce in its glass jar. Typically, there’s not enough room for expansion inside the jar when the sauce freezes, leaving a risk of the jar bursting. 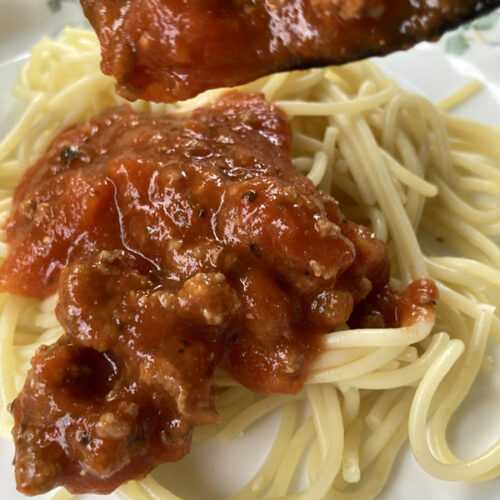 How to Freeze Spaghetti

Following are our simple step-by-step instructions for how to freeze spaghetti or any cooked pasta.
Print Recipe
Prep Time 5 mins
Total Time 5 mins

How many cups in a pound of pasta?

What does al dente mean?