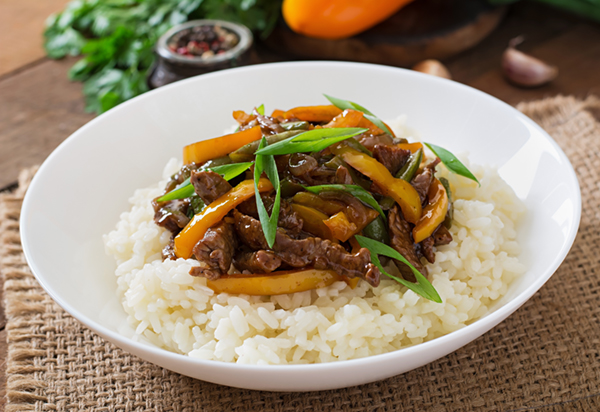 What is the best oil for stir fry? We’ve listed our top picks for your reference.

Stir fry is a unique cooking method used to heat food. It typically includes cooking food in a wok and uses a select oil that works well being cooked at a high temperature.

What Is Stir Fry?

How to Choose Stir Fry Oil

How do I know what oil to use for stir fry? There are three main concepts to keep at the front of mind. They are as follows:

High heat. You want to be sure to select oil that has a high smoke point. In other words, does it tolerate high heat without burning?

Stir fry is generally cooked at a high temperature so making sure that it functions well with high heat is an important factor to consider.

Refined oil. Confirm that the oil that you’ve selected is refined. This will ensure a cleaner, more efficient outcome that will be desirable.

How you heat cooking oil. How you heat your cooking oil also plays a factor into the oil that is chosen for this purpose. Gas heat is going to produce a hotter heat than electric heat.

In our list oof the best oil for stir fry below, we’ve laid out the smoke point for each option. You’ll want to take a look at that to know whether your choice oil is one of the highest smoke point oils.

One of the more non-traditional stir fry oils that we’ve included in our list below is grapeseed oil.

According to research, the healthiest stir fry oils include canola oil and olive oil.

Oils to Avoid for Stir-Fry

We recommend avoiding oils that have a lower smoke point such as sesame oil, extra-virgin olive oil, flax seed oil, butter, and shortening. These ingredients will burn if used for stir fry.

Following is our list of top 17 best cooking oils for stir fry. With each item we’ve included the smoke point along with a brief description of each one.

Almond oil has a slightly nutty, mild flavor and can be a very pleasant addition to many foods and works well as a choice oil for stir fry.

Avocado oil is one of the all-around best substitutes for coconut oil. It’s considered one of the healthier options and has a high smoke point. The flavor profile is somewhat bland with a hint of rich, just like avocado oil.

Avocado oil is a popular solution because it’s plant based. It’s also keto friendly and is a vegan option.

Camellia seed oil is widely used by Japanese women for cooking as well as a health and beauty product for skin and hair.

The reason we recommend camellia oil for cooking stir fry is that it has a high smoke point and it’s a popular solution for Japanese cooking.

Canola oil is one of the best oils for stir fry. It works well because it can be heated to a variety of different temperatures. It has quite a neutral flavor, so it works well for frying Chinese foods.

Canola oil is made from crushed canola seeds and is considered one of the best oils for heart health because it’s lower in saturated fats than other options.

Cottonseed oil is as the name sounds, it’s made from the seeds of a cotton plant and is a commonly used vegetable oil.

Cotton seed oil has a good smoke point for use in stir fry, and is mild with a hint of nutty flavor.

Coconut oil works fine for stir fry. However, the smoke point is not as high as some of the other oil options, so be aware of that and use caution if using coconut oil for stir fry.

Corn oil is also known as maize oil because it’s extracted from the germ of corn. It’s known for its high smoke point properties and is an economical solution for deep frying. Corn oil is a viable solution for cooking stir fry.

Grapeseed oil is great for use in stir fry because of its relatively high smoke point. It’s made from grapeseed which is the byproduct of wine making.

Grapeseed oil has a neutral flavor as well as a medium to high smoke point which makes it good for a variety of cooking purposes.

Olive oil is the made from the oil extracted from olives. It can range in flavor depending on the kind of olives used. When using olive oil in stir fry, we recommend tasting it first to determine whether the flavor of your dish will be altered too drastically.

In many cases, the use of olive oil will work well, as some varieties of olive oil don’t have much flavor and taste simply like oil.

We don’t recommend using extra virgin olive oil for stir fry because the smoke point is too low.

Pecan oil, made from pressed pecans, has a bit of a nutty hint of flavor. The high smoke point of 470F degrees allows for stir frying as well as sauteing, brazing, and browning without burning.

Peanut oil is made from peanuts and has a hint of a delicious nutty flavor. It’s known for the ability to deep fry things and not absorb the flavor of the other foods cooked in the oil.

Peanut oil is great for stir fry for a variety of low heat and high heat purposes.

Though rice bran oil is not as commonly used, it is really quite versatile andis great because its subtle taste of flavor doesn’t overpower the dish that it’s used in. It also has a high smoke point, making it a good solution for stir fry.

Safflower oil has very little flavor or taste. Safflower oil can be used for a variety of cooking, stir fry, and baked goods. And the other great thing is it’s affordable. If you want to use safflower oil for stir fry, there’s nothing wrong with that. It can be a great option.

Sunflower oil is made from sunflower seeds. It has a slight but mild nutty flavor and can be used for stir fry and a variety of baking, cooking, or frying needs.

Choose a light, untoasted sesame oil to use in much of the same way as you would canola oil, sunflower oil, or vegetable oil. It has a slightly nutty but mostly neutral flavor, and it’s great for its high smoke point.

Vegetable oil is considered one of the more affordable options that works well for stir fry. It’s perfect for sautéing, stir-frying, and deep frying because it has a high smoke point of 400F degrees. Vegetable oil is readily available at most grocery store locations.

Vegetable oil is made from flax seed and has an almost non-existent flavor. The flavor that is there is a slightly sweet flavor. When frying or making baked goods, vegetable oil is a good solution.

How to Cook with a Wok

Cooking with a wok makes delicious food. But using the correct techniques ensures an even greater outcome. Here’s how to cook with a wok.

Your wok cooking temperature will depend on the smoke point of the oil for stir fry you have chosen to use.

Following are frequently asked questions that relate to best oil for stir fry. If you have a question that’s not answered here, please drop it to us in the comments box below and we’ll be happy to answer it.

Can I use olive oil for stir fry?

Regular olive oil can be used for stir fry but extra virgin olive oil should be avoided because of its low smoke point.

Do I have to use a wok for stir fry?

A wok is the best pan to use for stir fry because it is made with the correct thickness and shape that is most conducive for stir fry. It also allows plenty of space for stirring and flipping foods while cooking them.

While a wok is the best pan, stir fry can certainly be made in an alternate pan, especially a frying pan.

There are many oils that can be used for stir fry. Sesame oil is one of the possibilities.

What oil is used in Chinese cooking?

What oil do Chinese use for stir fry? Soybean and canola oils are the two most frequently used oils in Chinese cooking. This is because their smoke points allow for high heat cooking and the flavor is minimally altering to the foods that it cooks.

What is the best oil to use in stir fry?

The best oil to use in stir fry are ones with high smoke points. Our recommendations include any from the list above, with preference given to canola oil and soybean oils.

What oil is healthiest for stir fry?

Canola oil is low in unhealthy saturated fat and higher in mono-saturated fats which is thought to help lower bad cholesterol.

Is olive oil or vegetable oil better for stir fry?

Either one will work. Both olive oil and vegetable oil have similar smoke points of about 400F degrees. Choosing between the two is a matter of personal preference and availability.