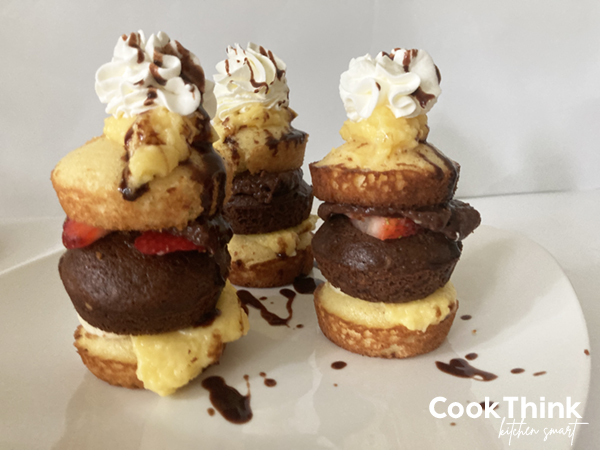 The Atomic cake is a wonderful celebratory cake that is typically made for milestone occasions. It is a delicious creation that includes 3 layers of cake that are Banana, Chocolate and White. The cake is then stacked with three layers of freshly made pudding, chocolate pudding, vanilla pudding and banana pudding, and fresh strawberries, ripe sweet bananas layered in between, and covered with fantastic whipped cream.

The idea of the Atomic Cake was thought to have originated in the 1940’s. Research shows the exact history of the cake is not known, but it was thought to be created in Chicago’s south side in honor of the first ever nuclear reactor. Since then, the cake has been referred to by other names such as the atom bomb cake or the banana split torte.

There might be occasions where you want to make a huge 3-layer cake with 3 layers of pudding, but this cake needs to be eaten right away or the bananas will turn brown. And if you don’t have 10-20 people to help you consume it, it might seem wasteful. With that in mind, we have come up with a way to make this same cake as cupcakes so that they can be enjoyed in individual portions if desired, without having to be overwhelmed with a huge cake.

This cake is said to have defied gravity. I think that’s mainly because of the impressive aspect that its presentation provides. After you’ve had the opportunity to enjoy the experience of consuming your atomic cake, perhaps you’ll agree.

Most of the history of the Atomic Cake has been lost since the cake is thought to have originated in the 1940’s. But what we do know is who truly invented the Atomic Cake and why it stayed on the South Side remain a mystery. But in the recent past, an Atomic Cake Deluxe has emerged at bakeries across the South Side of Chicago, topped with a pour of chocolate and a crown of chocolate-covered strawberries, making a new spin on this bakery confection.

Atomic Cakes: The Bombastic South Side, Dessert That Combines Three Cakes Into One

This South Side Delicacy Combines Chocolate, Yellow And Banana Cakes Into One Staggering Display of Baked Goodness

The impressive aspect really takes place when the cake is sliced. Before that it simply looks like just a plain white cake. Slicing the cake allows the true beauty to shine through and that’s when you hear folks gasping in awe because of what they’re about to enjoy.

Tips For The Best Cake

The following are tips to help you make the best Atomic Cake or cupcakes if you prefer.

1. Don’t over mix the cake batters or they will cause the cake to be too dense rather than light and fluffy. Instead, stir them until all ingredients are incorporated and that’s it.

2. Don’t over bake or under bake the cake. Use a toothpick in the center of the cake or cupcakes and see if it comes out clean. If there is still batter on the toothpick, the cake needs to cook a bit longer.

3. Let everything cool before assembly. Whether you’re making 1 large cake or several cupcakes, you’ll want to let the cakes cool completely before assembling them. Otherwise with warm cake, stacked with pudding and whipped cream, everything will just fall into a messy slump.

4. Keep in mind that bananas turn brown once they’re sliced. We recommend leaving the assembly of this cake to shortly before it will be served. If you have to assemble this cake ahead of time, be sure to use the pudding to cover the sliced bananas to prevent air from touching them and making them turn brown.

How To Slice A Layer Cake

Slicing a several layer cake can be tricky. Here are some tips to help you be successful.

1. Make nice clean slices of cake to show off layers.

2. The entire cake or complete cupcakes should be chilled for at least 30 minutes before it is sliced. Otherwise, you can end up with a mess.

3. Use a serrated knife and use back and forth sawing motions to make the cuts. The key is the sawing motion without pressing down much at all. Pressing down with cause the pudding to ooze out.

4. Use a napkin or paper towel to wipe knife clean between layers so that you don’t end up with nasty crumbs in your whipped cream layer of the next slice.

As you might imagine, Atomic Cake is a weighty cake that should be served on china plates, not your flimsy paper plates. Whimpy paper plates are typically too floppy to hold the weight of Atomic Cake.

Tools That Will Help in Constructing and Icing a Layer Cake

There are several tools that can be helpful to use when making this cake. These are all helpful, not required to make the cake.

1. Use a serving platter or flat cake stand to place, assemble and serve the cake.

2. Use a cake leveler to level the cakes before stacking them. This can help to prevent an odd shaped cake that crumbles.

3. Use a turntable to spread the whipped cream or buttercream outer layer.

4. Use piping bags and tips if desired to create a decorative touch.

How Do I Store Atomic Cake?

Atomic cake can be stored in an airtight container in the refrigerator for up to 3 days. Keep in mind the bananas will turn brown overnight and will likely need to be removed before consumption.

How Long Does Atomic Cake Last?

Can I Freeze Atomic Cake?

Atomic Cake can be frozen, but you’ll want to keep in mind that bananas turn brown when frozen. If you know you’re going to be freezing a portion of your cake, consider removing the bananas before placing the cake in the freezer or making the cake without bananas.

Can I Make Atomic Cake Ahead?

Atomic cake can be made ahead, but we don’t recommend making it too far in advance if you’re going to be using sliced bananas as the recipe instructs. Sliced bananas turn brown in a few hours.

What is an Atomic Cake?

An Atomic Cake is a three layer cake made with chocolate, banana and yellow or white cake. It is layered with 3 kinds of pudding, chocolate, vanilla and banana and includes sliced strawberries, bananas and is topped with whipped cream.

What to Serve With Atomic Cake

Atomic Cake goes great with any kind of celebratory meal such as a birthday, anniversary, retirement or graduation. Atomic cake goes well with meat and potatoes, a pasta dinner or simple soup and salad.

1. Frosting. The Atomic Cake is traditionally finished with a whipped cream layer. It helps to tie the whole cake together. You can use homemade whipped cream made by whipping heavy cream with sugar or you might choose to buy frozen whipped topping. Or some prefer to use buttercream frosting for the external layer.

2. Cake size. You might choose to make your cake as a personal size in cupcake tins for easier manageability or because you want a smaller quantity. If you want to make a large cake, just use a full cake mix for each of the 3 cake flavor layers.

Making an Atomic Cake requires quite a few ingredients, but don’t fear, these don’t all need to be made from scratch. They can be if you prefer. But most people don’t have the time or energy to make it all from scratch. We’ll show you how to make this cake with as much ease as possible. Here’s what you’ll need:

3. Pour ¼ cup of batter into greased cupcake cups, using chocolate batter in some cups, banana in some and yellow or white in the others.

4. Bake at 350F degrees for 10 minutes. Check the cupcakes for doneness. Return to the oven a bit longer if needed.

1. Use milk to prepare 3 flavors of instant pudding as directed on their boxes.

1. If you are using homemade whipped cream, prepare it by adding the heavy whipping cream and ½ cup sugar to a mixing bowl.

2. Use an electric mixer to mix on high speed until stiff peaks begin to form.

1. Before assembling make sure that all ingredients have completely cooled.

2. Assemble cupcakes or cake by placing banana cake on the cake platter, top with banana slices covered by a layer of banana pudding.

3. Next, gently stack the yellow or white layer on top and add strawberry slices, cover with pudding.

4. Gently place the chocolate cake layer on top and top with chocolate pudding.

5. Finish with whipped cream or buttercream frosting as preferred.

It is a delicious creation that includes 3 layers of cake that are Banana, Chocolate and White. The cake is then stacked with three layers of freshly made pudding, chocolate pudding, vanilla pudding and banana pudding, and fresh strawberries, ripe sweet bananas layered in between, and covered with whipped cream.
Print Recipe
Prep Time 30 mins
Cook Time 8 mins
Total Time 38 mins
Course Dessert
Cuisine American