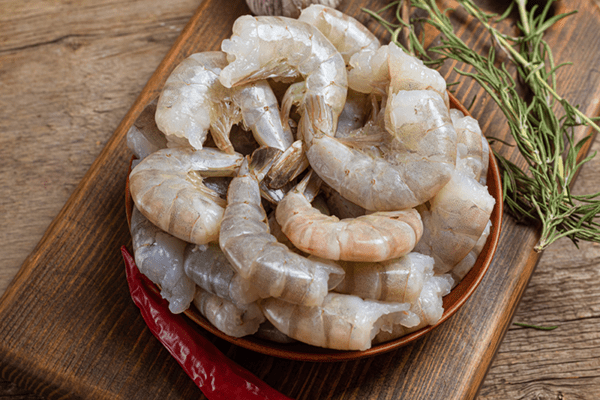 How To Devein Shrimp
If you are like us, you did not grow up in Gulf States like Florida, Mississippi, Texas, Alabama or Louisiana where raising, fishing and eating shrimp is commonplace. So, we have created this tutorial for those who will benefit from it.

Do You Need To Remove The Vein?
The vein in a shrimp is not really a vein, but rather it is the digestive intestinal tract of the shrimp. It appears black and runs along the back of the shrimp from head to tail. Depending on what the shrimp was eating right before it was caught the vein might or might not be prominently visible. If the vein is left in and consumed, it is not harmful. However, it might provide a bite of grit for your delicious meal.

Instructions For How To Devein Shrimp:
1. Remove the head of the shrimp by using a paring knife to cut it off

2. Next, remove the thin shell from the shrimp by gently putting your finger underneath it on the head end and gently tugging on the tail end to slide the shell off and remove it completely.

3. Use a paring knife to prepare a shallow (about ¼” deep cut) along the back of the shrimp. Now you should be able to gently pull the shrimp apart and remove the black vein (intestinal tract) using the tip of your knife.

Deveining shrimp can seem gross at first, however after the first few, you can begin to get over the disgusting factor and look forward to enjoying the freshest cuisine.

For your safety, you’ll want to keep the shrimp cool in the refrigerator or on ice until they are cooked or consumed.

Shrimp has been the most popular seafood in the United States for several years. It represents more than a quarter of the seafood eaten in the country. Whether you are deveining your own shrimp to save money or to enjoy them fresh, we trust this tutorial has been helpful to you.

Shrimp Facts:
Shrimp can be prepared in a variety of ways including: baked, boiled, steamed, fried, grilled and eaten raw.

The consumption of shrimp is known to help prevent Alzheimer’s disease, slow the growth of cancerous tumors, reduces the risk of cardiovascular problems, helps brain function, regulates the absorption of calcium and phosphorus and helps avoid blood clots.