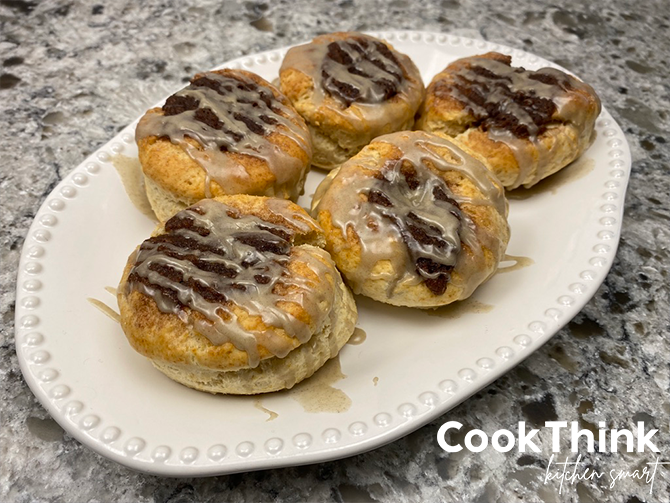 Making your own copycat Bojangles Cinnamon Biscuit Recipe has never been easier. With just five ingredients to make these amazing biscuits, then top them off with a tasty cinnamon concoction, followed by a cinnamon glaze, your morning will be off to an amazing start with our delicious recipe.

Although this is not Bojangles exact recipe, these copycat Bojangles cinnamon biscuits are just like the real thing, if not even better! Bojangles features a fluffy biscuit that is topped with a dollop of a cinnamon and sugar mixture, baked, and then glazed before serving. Our copycat recipe is made using a similar method and tastes absolutely amazing.

Our copycat recipe features the lightest, fluffiest homemade biscuits I have ever had, topped with a mixture of cinnamon, sugar, and butter. It is then finished off with a drizzle of frosting glaze. We are excited to share with you a few variations of how you can prepare this biscuit, as well as the super easy recipe, that will allow you to enjoy the most amazing biscuit recipe available.

Bojangles is a fast-food restaurant that is primarily found in southeastern states. They serve primarily chicken…and biscuits! Because their biscuits are so well-loved, most items on their menu incorporate their biscuits in some fashion. The restaurant opened its doors in 1977 and has continued to thrive and expand throughout the years.

The restaurant is said to make their biscuits fresh every day and serve them while they are fresh from the oven. Some say that they have been known to sell one thousand biscuits in some eight-hour time periods. If you are a lover of these biscuits, then you are going to love being able to make your own amazing biscuits from scratch, whenever you wish!

Making your own copycat Bojangles Cinnamon Biscuits from scratch is surprisingly easy to do. There are three sections involved when making these biscuits. The different portions include making your own biscuit dough from scratch, creating your cinnamon mixture, and topping them off with some tasty icing. I am so excited to share this biscuit recipe with you today, while it is not the recipe that Bojangles uses, this recipe shows you how to make the most amazing light and fluffy biscuits, that you will never want to use any other recipe, ever again.

How to Make These Marvelous Biscuits

To make the biscuits you will want to combine the flour, salt, and baking powder together in your mixing bowl and mix well. Then cut in your butter and mix until your chunks remaining are about pea-sized. Add in your milk and stir until your dough begins to come together. Roll your dough out onto a lightly floured surface, but out your biscuits. Place them onto a greased cookie sheet. Set aside while you prepare your cinnamon filling.

For the cinnamon filling:

Combine your butter, cinnamon, and brown sugar in a microwave-safe bowl, then microwave for 30 seconds, and stir to combine. Scoop about one tablespoon full into the center of each biscuit. Bake.

In a large mixing bowl, combine flour, baking powder, and salt. Stir together. Add butter. Cut until very fine. Pour in milk, mix until the dough begins to pull together. Roll dough out onto a lightly floured surface.

Once your dough is rolled out onto a lightly floured surface, cut out your biscuits. Please note for best results, you will want your dough to be about ½ inch thick. Place onto a greased cookie sheet. Squish the centers so that they look almost like droughts.

In a microwave-safe bowl, combine butter, cinnamon, and brown sugar. Microwave for 30 seconds. Remove and stir. Scoop about a tablespoon of the mixture into the center of each biscuit.

Bake at 425 for 12 minutes, or until your biscuits begin to turn a golden brown. Remove and allow to cool while you mix the icing together.

Mix powdered sugar, milk, cinnamon, and vanilla together in a small bowl. Drizzle on top of your fresh biscuits. Serve and enjoy!

For your glaze, the melted butter, and vanilla are optional but do help to improve the overall flavor of the icing.

Making biscuits is a much easier process than making breads. If you follow the ingredient amounts and processes listed above, you are going to be just fine!

The best tip of trick when making the perfect biscuits, is to not skimp on your baking powder, and to be sure you leave your dough thick enough when you are cutting out your biscuits. If you follow these steps given, you are in for some amazing biscuits!

We have estimated that this recipe typically makes a total of eight biscuits, and we consider one biscuit to be a serving size. Based on this, one serving contains an estimated 222 calories. One biscuit also contains 9.4g total fat, 25mg cholesterol, 224mg sodium, 30.9g carbohydrates, and 4.1g protein.

There are several different variations on our copycat biscuit recipe you could choose to make if you wanted. These all include the basic biscuit recipe included above with slight modifications.

Some people prefer drop biscuits over the kind you cut out. If you are one that prefers this, you can adapt the above recipe to make drop biscuits, simply by increasing your milk content to 1 cup. You may also desire to increase your butter by 2 tablespoons as well. Then once your batter is created, you will simply scoop it out and drop the scoops on your baking sheet.

There are several different ways you may choose to incorporate the cinnamon mixture into your biscuits. While our recipe above instructs you to create an indent in the biscuit dough then add the mixture there, you could also layer your dough, and add cinnamon layers in each biscuit. Another idea is to use a muffin tin to bake your biscuits, before adding your biscuits though, add some butter, brown sugar, and cinnamon to the bottom of the tin, then top with your biscuit. This essentially will create an upside-down cake effect with your biscuits.

Making cinnamon pecan twists is yet another option. To make these you will prepare your dough as stated above, then cut your biscuits into long narrow strips instead of round cutouts. Add a layer of your cinnamon mixture and twist the dough together before baking.

For all of you apple lovers out there, try peeling and chopping up some apples to kneed into your biscuit dough before cutting it out. Then when you cut out your biscuits it is already inside your dough. Bake according to the instructions above.

Another great variation to this recipe is to add raisins to your biscuit dough as you are mixing it together. This will allow you to enjoy the nice addition of raisins in your creation.

To make gluten-free cinnamon biscuits, you can simply use your favorite gluten-free all-purpose flour. For best results, we recommend that you use flour such as King Arthur, or Pillsbury. If your flour does not already contain it, you will also want to include ½ tsp xanthan gum. Otherwise, you can prepare as above.

To make this recipe dairy-free, you may substitute kinds of milk such as almond milk for regular milk. The proportions will remain the same.

You may also want to make some copycat Bo-Berry biscuits. These are biscuits that include blueberries. To make these simply add blueberries to your dough before cutting it out. This will allow you to enjoy the amazing taste of blueberries mixed into these delicious biscuits.

For the easiest and best gooey cinnamon biscuits, our copycat recipe will have everyone wishing for more. This recipe makes a great breakfast recipe or even a brunch recipe. If you want to enjoy the biscuits alone, simply leave off the cinnamon and glaze for a delicious bread to enjoy alongside any meal.

The process of making this copycat biscuit recipe is very simple and tastes amazing. This is a recipe that you need to try because it is unlike any other recipe ever. You will want to add it to your regular recipe rotation, for sure!

Bojangles’ cinnamon biscuit is a favorite for many people, now with our copycat recipe, you can enjoy a breakfast very much like the real thing any time you want! These biscuits are so good, these homemade ones just might beat the tasty goodness from the restaurant.

Our super easy biscuit recipe makes the best copycat Bojangles Cinnamon Biscuit Recipe you will ever find. They are the ultimate breakfast and only require a few ingredients. Give them a try today and let us know what you think of this fantastic recipe! 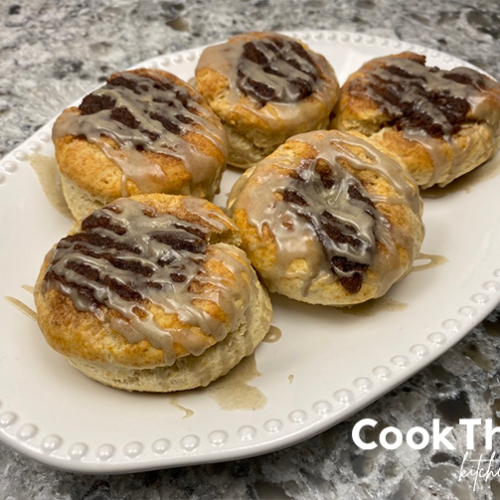