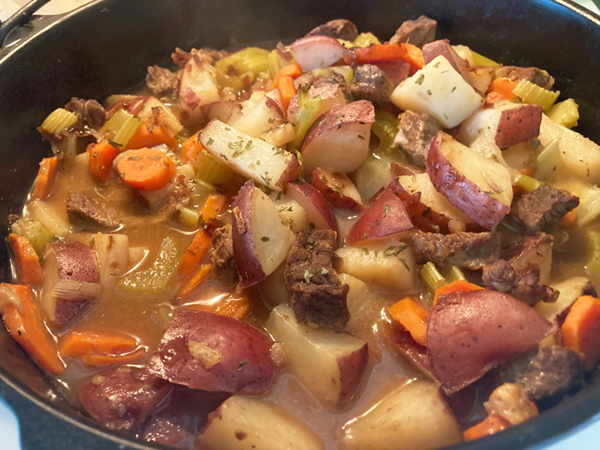 Pot Roast and Beef Stew are comfort food favorites. But are they the same thing? The short answer is no. Below we’ll describe all the details of the similarities and differences of pot roast vs beef stew.

What is Beef Stew?

Beef stew is made of bite sized pieces of beef, vegetables, and a thick gravy to hold it all together. It is traditionally cooked on the stovetop and can be heated in the oven for finishing.

What is Pot Roast?

Pot roast consists of a whole cut of beef that is cooked slowly in a Dutch Oven in the oven or slow cooker, with gravy for flavoring and whole or large chunks of vegetables.

There are many similarities between beef stew and poot roast. And those similarities include the fact that both are made with beef. Typically, both include vegetables, and both include some kind of gravy flavoring. Here are the details:

Beef. Both beef stew and pot roast include the main ingredient of beef. Cuts such as Chuck Roast, English Roast, or Pot Roast can be used in both dishes.

Vegetables. Another similarity between the two dishes is that they both include vegetables. Popular vegetables such as potatoes, onion, and carrots are longstanding traditional ingredients on both occasions.

Gravy. Gravy is a valuable ingredient for both stew and pot roast. It provides both the flavoring as well as the moisture content that pulls it all together.

The similarities between beef stew and pot roast sometimes cause confusion which leads to using the terms interchangeably, but sometimes incorrectly.

See our comparison chart below for noting the similarities and differences in beef stew vs pot roast.

Meat Size. The meat size in a pot roast typically remains whole and as is when purchased from the store. However, the meat size for beef stew is cut into bite sized pieces.

Added Vegetables. Vegetables such as potatoes, carrots, onion, and any other vegetables desired can be added to either dish.

The difference comes into play in the size of vegetables used. For stew, vegetables should be cut into bite sized pieces, whereas for a pot roast, vegetables can remain whole.

Cook Time. The cook time for beef stew is much less since everything is cut into bite sized pieces.

The cook time for pot roast takes longer since you’re dealing with a whole cut of meat.

Amount of Gravy. The consistency of the gravy used for beef stew should be thick and it there will be a greater quantity.

Stew can be thought of as similar to a thick soup. Less gravy is typically used for pot roast and the purpose is simply for moisture and flavoring.

Cooking Method. The majority of the cooking for beef stew is traditionally done on the stovetop. Meat is browned and cooked in a cast iron pan, and vegetables are added and cooked until tender.

However, for a pot roast, the majority of the cooking is done in a Dutch oven pan in the oven.

Below is our comparison chart for pot roast and beef stew. This will allow you to see the similarities and differences side by side for each one.

What is the Difference Between Soup and Stew?

Stew tends to be more complex, the ingredients are cut into larger pieces, and the broth is thickened more than soup. The contents of stew are traditionally cooked by stewing the ingredients.

Soup is made with a liquid base, cooks more rapidly, and includes ingredients that are cut into small pieces.

What is Stew Meat?

Stew meat typically includes cuts of beef that contain a fair amount of connective tissue such as Chuck Roast or Beef Round. When simmered in broth those tissues break down and become melt in your mouth delicious.

Is Pot Roast Beef or Pork?

Pot roast is traditionally beef, but it can be pork if desired.

Uses for Stew Meat Other Than Stew?

Considering what to do with extra stew meat other than making stew? Why not use it for tacos, loaded baked potatoes, wraps, or burritos. Add your favorite toppings and add-ins and you’ve got a delicious meal.

There are similarities and differences between pot roast and roast beef. Both come from the chuck portion. However, pot roast comes from shoulder blade and roast beef is from top blade.

What is the Difference Between Rump Roast and Chuck Roast?

Following are frequently asked questions that relate to pot roast vs beef stew. If you have a question that’s not answered here, please drop it to us in the comments box below and we’ll be happy to answer it.

Can you use a pot roast for beef stew?

Yes, you can use a pot roast cut of meat for beef stew.

What is the most tender beef for stew?

The most tender cut of beef for stew is a cut of meat that has gone through the aging process.

Can you put raw meat in a slow cooker?

Yes, you can put raw meat in a slow cooker and cook it that way if it’s handled properly for food safety reasons.