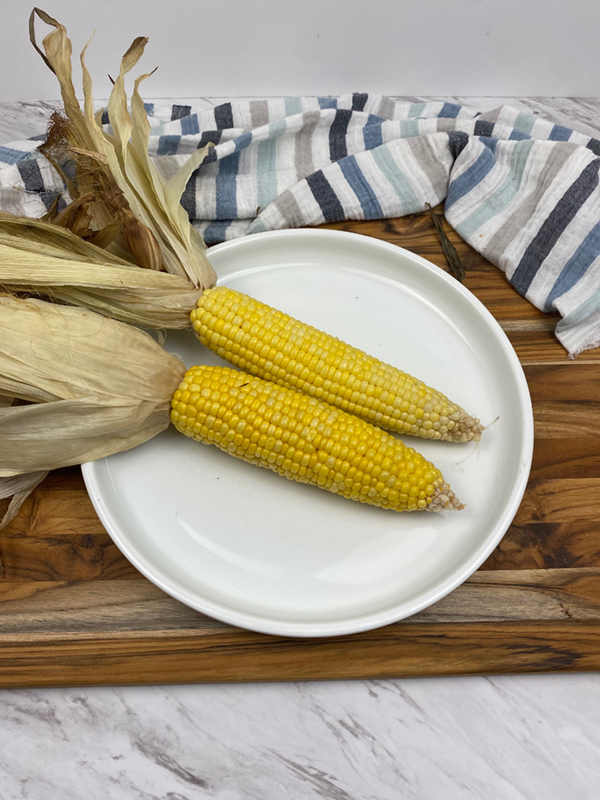 There’s nothing like fresh corn from the Farmer’s Market or farm stand in the late summertime. It’s so sweet and juicy and when garnished with salt and butter makes the perfect meal. But when you want to keep some for later, you might find yourself asking the question, how long does corn last in the fridge.

We’ll answer how long is corn good for and where to store it as well as provide bonus material such how to freeze sweetcorn, and how to blanch corn.

How to Store Uncooked Corn

The best way to store uncooked corn on the cob is to leave it wrapped in its husk in the refrigerator. This will help it to maintain its freshness. Corn stored in this manner should last up to 7 days if it’s fresh when it’s purchased.

Corn that is husked and left to be stored before it’s cooked should be placed in a zipped storage bag with any excess air removed and placed in the refrigerator. This will help to keep it from drying out.

How to Store Cooked Corn

If you’ve cooked corn whether it be corn on the cob, corn that’s been removed from the cob, or grilled corn that’s still in the husk, you’ll likely want to know how to store any leftovers so that you can use it later on.

Cooked corn can be stored in an airtight container for up to 3 days in refrigerator. After that it should be frozen or discarded.

How to Freeze Corn

Freezing sweetcorn is a good alternative to canning corn to prolong its shelf life without all the fuss and necessary equipment that goes along with canning.

Here’s how to freeze sweetcorn:

1. Remove the husk from the corn cob along with any strings of silk.

2. If you want the corn to be cooked before it’s frozen, you’ll want to blanch it using our step-by-step instructions below.

The corn can be frozen on the cob or you can proceed to the next step and remove it from the cob.

3. Cut the corn from the cob if desired, using a sharp knife.

4. Decide the desired portions and place each portion into a zipped freezer bag.

5. Date and label the bag before transferring it to the freezer.

How Long Does Corn on the Cob Last?

The length of time that corn on the cob will last will depend on a couple of factors such as how fresh it is when you obtained it. Was it picked straight from the farm field when you bought it, or has it spent time in transport to get to your local grocery store?

The other factor that will determine how long corn on the cob will last is whether it’s been husked and if it’s already been cooked. These are two factors that will diminish its shelf life.

For the longest shelf life for corn on the cob, buy corn that’s fresh and store it in its husk in the refrigerator.

How Long Does Raw Corn on the Cob Last?

Raw corn on the cob can last for 5-7 days when stored at room temperature or inside the refrigerator.

For the best results, keep the corn in the husk to store it and wait and remove the husk right before it’s cooked.

How Long Does Cooked Corn on the Cob Last?

Refrigerator. Corn on the cob that’s been cooked can be stored in the refrigerator for up to 3 days at 40F degrees and placed inside an airtight container. If it shows any key indicators of spoilage, it should be discarded and not consumed.

Freezer. Corn on the cob that’s been cooked can last 2-3 months in the freezer. It should be stored inside a zipped freezer bag to maintain freshness.

Does Unshucked Corn Need to be Refrigerated?

No, unhusked corn doesn’t need to be refrigerated. It can be stored at room temperature and maintain its freshness for about a week.

For longer storage without cooking or freezing your corn, you can transfer it to the refrigerator.

How Do You Store Fresh Corn on the Cob?

The best way to store fresh corn on the cob is to keep it in its husk and place it in the refrigerator until you’re ready to use it.

Remove the husk and the silks right before you intend to cook it for the best results.

Or leave the husk intact for cooking if your cooking method such as grilling or microwaving it suggests that.

Does Corn on the Cob Go Bad?

Yes, corn on the cob can go bad. If you suspect that your sweetcorn has gone bad, throw it away and do not eat it.

The two key indicators for knowing that your corn has gone bad are by its appearance and smell.

Appearance. If your corn has developed mold, seems discolored, or has dried out, these are signs of spoilage.

Smell. When sweetcorn develops a strange or sour smell, it has gone bad and should be thrown away.

Do not risk eating corn that has spoiled. Instead, throw it away.

Does Sweetcorn on the Cob Expire?

Corn on the cob doesn’t have an expiration date, per se. However, it can show key indicators of spoilage and should be thrown away.

Watch for an odor that’s rotten. Or the appearance of mold and a slimy film will also indicate corn that shouldn’t be eaten.

Does Corn Go Bad in the Refrigerator?

When Does Corn Go Bad in the Freezer?

If handled properly, corn on the cob can last for up to 2-3 months in the freezer for the best quality. And it can potentially be safe for up to one year.

How Long is Corn Good for at Room Temperature?

The length of time that corn is good for depends on the state of the corn. Is it cooked, uncooked, fresh, canned, still in the husk? The condition it’s in will determine how long it will last.

Cooked Corn. Cooked corn will typically last in the refrigerator for up to 4 days, when stored in an airtight container.  It will last about 2-3 months in the freezer.

Canned Corn. Canned corn is corn that’s already been cooked. It generally lasts for up to 2 years, but you should keep note of its expiration date or best if used by date.

Following is our table that shows how long you can anticipate your corn lasting depending on its storage method.

How to Reheat Corn on the Cob

Two of the most popular ways to reheat corn on the cob include using the microwave or using a pot of boiling water.

Microwave. Place the corn in the microwave for 15-20 seconds at a time until the corn is heated through.

Stovetop. Set a pot of water on the stovetop to boil. Add the corn cobs when the water reaches a rolling boil and heat for about 3 minutes until warmed through.

How To Blanch Corn

When freezing corn or storing it for a long-term solution, you’ll often see recipes that refer to blanching corn. To blanch corn, use our following step-by-step instructions:

1. Boil water. Bring a pot of water large enough to fit whole corn cobs or loose corn and bring it to a boil.

2. Cook corn. Allow the corn to boil in the water that has reached a rolling boil for 5 minutes.

3. Ice bath. While the corn is boiling, prepare an ice bath and transfer the corn from the boiling water to the ice water and let it sit for about 3 minutes.

5. Freeze if desired. After the corn has dried, it can be frozen. Be sure to date and label the packaging for future reference.

How to Remove Corn from the Cob and Freeze

In order to freeze corn, you might prefer to remove it from the cob before freezing it. This can be done regardless of whether your corn has already been cooked or is still in its raw form.

Use sharp knife sawing motion. To remove your corn from the cob, locate a sharp knife, stand the corn cob on its end and cut off the corn all the way around the cob using a back-and-forth sawing motion. Make several cuts the full length of the cob, turning as you go, until the corn has been fully removed.

Freeze in bags. The best way to freeze corn is in zipped freezer bags, removing any of the excess air before sealing the bag. Be sure to date and label the bag with the date it’s being frozen as well as the contents.

Following are frequently asked questions that relate to how long does corn last in the fridge. If you have a question that’s not answered here, feel free to drop it in the comments box below and we’ll be happy to answer it.

How long does cooked corn last in the fridge?

Corn stored in the fridge can last up to 3 days when cooked and stored in an airtight container.

How long does shucked corn last in the fridge?

Husked corn can last up to 5-7 days when husked and stored in a zipped storage bag in the refrigerator.

Can you freeze fresh corn on the cob?

Yes, you can freeze corn on the cob with the husk removed and before or after it’s been blanched or cooked.

How long does corn last in the fridge?

1 thought on “How Long Does Corn Last in The Fridge”