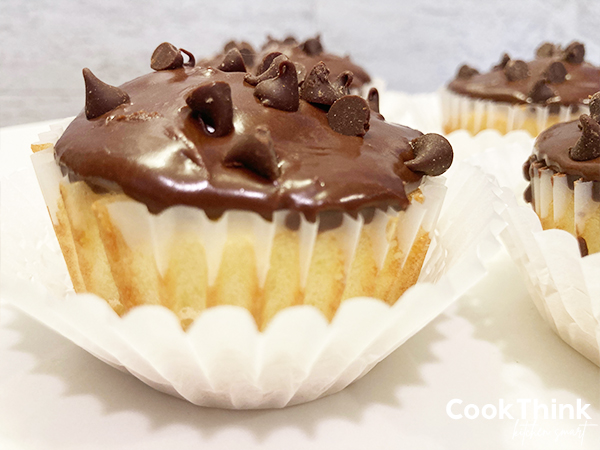 A Gansito cake is a Mexican snack cake, with a strawberry-flavored jelly and crème-filled cake and chocolate flavored coating. The commercial brand is made and distributed by Marinela, but we’ll show you how to make a homemade version in the form of a cupcake, using real whipped cream and strawberry jelly.

If you don’t want to make a personal sized cake, in the form of a cupcake, you can make a giant version using a 9×13 cake pan or three loaf pans, baking the cake in layers.  After the cakes have baked and fully cooled, you’ll want to level them with a large sharp knife before assembling them. Carve out a space in the top layer to add your whipped cream and strawberry jelly before covering the whole thing with melted chocolate.

The delicious filling inside our homemade Gansito cake is what helps to make it so delicious. The filling adds texture and flavors that will make your mouth water. These mimic the flavors and fillings of the Marinela brand made Gansito snack cakes.

Did you know that the word “Gansito” literally means little goose. With that being said, we’re not quite sure how this delicious Gansito cake got its name. That would be interesting to find out.

Pastel Gansito translated from Spanish to English means goose cake. We’ll be happy to inform you that this cake does not taste like goose, nor is it made from goose.

These little snack cakes by Marinela have become so popular. They originated in Mexico and would be considered stiff competition or comparable to our twinkie snack cakes in the United States.

How To Make A Giant Gansito Cake

To make a giant version of our sweet little cupcake, just modify by using the pan of your choice.  To make a giant rectangle cake, use 3 loaf pans, level the cakes once they’re cooled and stack the layers using a minimal amount of buttercream between the layers just to hold them together.  Carve out the top layer making a slight dip to place the strawberry jelly and whipped cream. Cover with chocolate ganache.

There are many different sizes and shapes that you could potentially make a Gansito cake. The traditional shape is a small bite-sized rectangle. If you prefer to keep with the traditional shape, you could make your cake in a rectangle shaped pan and then cut it into the smaller bite sized pieces once the cake is cooled.

You might also choose to use round cake pan to make a layered cake. Or mini cupcakes make an adorable and delicious dessert too.

This Chocolate Gansito Cake Will Make You Drool Uncontrollably

If you like chocolate, cake, whipped cream and strawberry, we’ve got you. It’s possible that this delicious cake will make you drool. But go ahead and make it so you can enjoy its wonderful flavors.

So we all know that Gansito is the greatest childhood treat of all time (and that’s putting it mildly).

Well, get ready to have your mind blown, youtuber El Guzii just took Gansito to a whole new level and made this monster creation known as the Giant Gansito Cake.

Instead of creating a bite sized personal snack cake, he went the opposite direction and made an oversized cake by baking the cake in a large sheet pan, stacking the cake into 3 layers and carving out a hallow in the top of the top layer for his strawberry and whipped cream filling. Finally, he covered the whole thing with melted chocolate.

First you start by making the base of the cake, using a combination of cake mix and vanilla pudding/flan mix.

In our recipe, we simply use cake mix, but if you prefer a denser cake, you can add a packet of instant pudding to the mix. This will help your cake become stronger and denser.

Once the cake is baked, it’s turned upside down, and scraped with a spoon to create a hollow center, where all the good stuff will be poured.

You’ll want to allow your cake to fully cool before doing any moving, dumping or scraping. But once it’s cooled, you can carefully move it to the desired location or cake board. Then if you’re making the giant version, you can carve out the top to add the fillings.

You mix strawberry jam and corn starch, and boil it to create this beautiful red strawberry filling. . .

Some people prefer to use strawberry jam straight from the jar.  Or if you want a stiffer substance to work with, you can boil the strawberry. Jam with a bit of cornstarch which will make it thick.

And then you pour it into the cake (DROOLING)

Allow the strawberry mixture to cool completely before assembling your cake or cupcakes. This is probably where you’ll start to salivate.

And once you have your cheesecake filling done, you pour that on top of the strawberry filling.

Some folks like to use cheesecake for the white layer, but we use heavy whipping cream, the real deal. Whipping cream is more authentic to the commercial made version of Gansito cake and it makes the cupcake nice and fluffy compared to using cream cheese. For cupcakes you’ll want to pipe it into the cake.

You Pour Some Homemade Chocolate Ganache

The key with making your chocolate ganache smooth is to mix it with coconut oil so that it doesn’t set up right away and so it doesn’t get lumpy.

Top it off with some giant chocolate fondant “sprinkles”. . .

2. Mix together the boxed cake mix, preparing it according to the box instructions.

3. Fill the cupcake papers about ½ – 2/3 full and bake according to the box instructions.

4. Set cupcakes aside and allow them to fully cool.

For The Whipped Cream:
5. Add heavy whipping cream and powdered sugar to electric mixer. Whip on high until soft peaks begin to form.

For Chocolate Ganache:
7. In a medium saucepan over medium heat, melt chocolate and mix with coconut oil.  Stir until fully melted and smooth.  Remove from heat, set aside and let cool.

How to Assemble Gansito Cake Cupcakes
Make sure cupcakes and chocolate ganache are fully cooled before assembly.

1. Load whipped cream and strawberry jelly each into their own piping bags.

2. Add a squirt of strawberry jelly inside each cupcake, making a hole with the piping bag tip through the top.

3. Then add a squirt of whipped cream inside each cupcake, making a hole with the piping bag tip through the top.

4. Cover the top of each cupcake with cooled chocolate ganache. Sprinkle with chocolate sprinkles. Allow the ganache to setup. Serve and enjoy!

To work with smooth chocolate ganache that doesn’t set up right away, you’ll want to be sure to melt it with the coconut oil as called for in our recipe, otherwise it’s likely you’ll end up with lumpy chocolate.

The other important factor is making sure the ganache and cupcake are both completely cooled before adding the whipped cream.  If they’re not cooled, the heat will melt the whipped cream and it will be absorbed right into the cupcake making it disappear.

Nutrition Information: We estimate that this recipe makes 12 cupcakes. Therefore, the serving size is based on 1/12th of the recipe. The following nutrition information is an estimate and will vary based on the ingredients and brand of ingredients used.

Diet Information: Gansito cake made homemade from our recipe above includes gluten.  To easily make this recipe gluten free, substitute the cake mix with a gluten free cake mix to accommodate any dietary restrictions.

Calories: We estimate there are 200 calories in 1/12th of the baked recipe above, which is about 1 cupcake.

To make it, mix together the sweetened condensed milk, cocoa powder, vanilla and heavy cream. Add crumbled or diced Gansitos as desired. Place in a freezer safe airtight container or zipped freezer bag. Freeze overnight or until the mixture reaches the desired consistency. Serve and enjoy.

For The Whipped Cream:

How to Assemble Gansito Cake Cupcakes

To work with smooth chocolate ganache that doesn’t set up right away, you’ll want to be sure to melt it with the coconut oil as called for in our recipe, otherwise it’s likely you’ll end up with lumpy chocolate.  The other important factor is making sure the ganache and cupcake are both completely cooled before adding the whipped cream.  If they’re not cooled, the heat will melt the whipped cream and it will be absorbed right into the cupcake making it disappear.
Tried this recipe?Please leave a message in the comment box below to let us know. Or post a picture on social media and mention @CookThink or tag #CookThink!
Share Email Pin Recipe