Patti LaBelle Banana Pudding Recipe is delicious and can’t be topped. Or can it? This recipe for our homemade banana pudding is a copycat of Patti LaBelle’s recipe, only very delicious. Learn how you can easily make this dessert that is low cost, and tastes amazing, with the details below.

If you are looking for an easy way to have Patti LaBelle’s banana pudding, Walmart’s bakery is not carrying it in a larger option or a smaller one. Although picking this up is an easy alternative to making your own homemade version, there are a couple of downfalls with buying this pudding at Walmart.

Banana pudding that is made from Patti LaBelle’s recipe can be found at many different Walmart stores throughout the country. This is a basic banana pudding with a whipped layer topped with vanilla wafer cookies.

Walmart is now selling two sizes of Patti LaBelle’s banana pudding in their bakery cooler section. While this is great if you have unlimited resources and don’t mind pudding that is not exactly fresh. It is very handy to pick it up and go.

However, the average cost for a thirty-six-ounce container is around ten dollars, and a smaller version that contains five and three-fourths ounces costs an average of three dollars. The cost of purchasing this could get a bit high if you like the pudding and purchase it on a reoccurring basis.

The other aspect of this pudding for purchase is that not everyone is a big fan for different reasons. If you are looking for ideas to improve the store-bought pudding, we have a few ideas for you. Later, we will also share with you how to make your own banana pudding that tastes better than Patti LaBelle’s and you can make it at home!

There are varying opinions on the taste and overall flavor of Patti LaBelle’s banana pudding sold at Walmart. If you have tried it and or even if you haven’t, we would highly encourage you to give this recipe a try, and see what you think about this pudding while it is fresh. But first, a few ideas to help improve your store-bought banana pudding.

Although there are many ways you can spruce up your store-bought banana pudding, we have come up with four quick and easy things you can do to improve it overall. Those four things are 1. The dish you serve it in, 2. Fresh bananas, 3. Cookie crumbles, and 4. Fresh whipped cream.

How To Spruce Up Store Bought Banana Pudding

Serving Dish. Start with the container you are going to serve the banana pudding in. If you have a nicer, or fancier option, this is going to help your overall presentation.

Fresh Bananas. Second, if you have fresh bananas, slice some up, and top your serving dishes with some sliced bananas. Not only will this help to make your pudding look cute, but it will also add extra flavor to your pudding.

Cookie Crumbles. Crumbling up some fresh cookies will help to add some extra texture, flavor, and make your serving dish look cute. For best results, you will want to add the cookies right before you plan to serve so that they don’t get soggy.

Fresh Whipped Cream. It is difficult to beat the amazing taste of a fresh dollop of whipped cream. Try topping your servings of banana pudding off with a squeeze of fresh or canned whipped cream to add an extra flair to your dish.

Do you love Patti LaBelle’s banana pudding that is available for purchase? No matter what your preference, we have a banana pudding recipe that you have got to try. This recipe is an absolute must give it a taste.

We would like to introduce you to this delicious pudding recipe, which is a take on Patti LaBelle’s banana pudding. This recipe is worth the try, and will hopefully be one of your new favorites!

This recipe for homemade banana pudding is going to have you amazed at how delicious it tastes. Even if you are not typically a fan of banana things, you really should give this one a try, it’s just that good.

How To Make Banana Pudding

The process of making this banana pudding is pretty straight forward. To start off, you will need the following ingredients:

To make this pudding, start off by heating ½ cup heavy cream over medium-low heat until it is warmed up. In a mixing bowl, add egg yolks and sugar and mix until they are light yellow and fluffy. Add in your warm cream and mix together, this will help to temper your eggs. Pour the mixture back into a saucepan. Cook your eggs over medium heat, stirring constantly until your mixture thickens. Your egg mixture also must reach 160°F on a thermometer.

Once they have reached temperature, remove them from the heat and add in, vanilla extract, sea salt, bananas, cinnamon, and instant pudding mix. In a separate mixing bowl, whip heavy cream until stiff peaks form. Add ¼ cup sugar and stir. Once whipped cream is fluffy, pour in your banana mixture. Whip on low until combine.

Now it is time to add your pudding to your serving dish. Create layers with cool whip, pudding and vanilla wafers. Once created, place in the fridge and allow to chill. Serve and enjoy the same day that you assemble your pudding creation.

How To Make Your Banana Pudding Recipe Even Better:

To make your banana pudding even better, you could try creating it in an 8×8 pan and have a sugar cookie baked into the bottom as a crust. You could also try topping your pudding with a fudge drizzle, crushed nuts, or chopped strawberries.

In a saucepan, heat ½ cup of heavy cream over medium heat until it is warm. Do not allow it to boil.

While your cream is heating, in a mixing bowl, add egg yolks and granulated sugar. Whisk until your eggs become a light yellow and your mixture is fluffy.

Remove your cream from the heat and pour into your mixing bowl. Whisk together on low, until combined. Pour your entire mixture back into the saucepan.

In a separate mixing bowl, pour in your 1 ½ cup remaining heavy cream. Whisk on high until stiff peaks form. Add powdered sugar and whisk to combine.

Add your banana mixture to your whipped cream and whisk on low, to combine.

Next, in your serving dish, create layers of cool whip, banana pudding, and vanilla wafers. Refrigerate until chilled, serve on the same day and enjoy!

Any leftover pudding should be kept in an airtight container in the fridge. It may be stored there for about three to five days before it is time to toss it. However, the cookies will begin to turn stale and mushy the next day or two after it is prepared, so it is best eaten as quickly if possible if you are including cookies.

If you are looking for a tastier version, you can always experiment with adding extra bananas or cinnamon, along with more vanilla extract to increase the flavor. You may also try topping your dessert with different types of nuts, or even chocolate shavings.

Banana pudding can be enjoyed either hot or cold. Whether one is better than the other is a matter of preference. I for one, prefer to enjoy banana pudding while it is cold. However, many people enjoy it slightly warm as well. If you are going to try to warm it up, be aware that if your contains whipped cream or cool whip, it is likely to turn from pudding to a bit of a soupy mess if heated too much.

Banana pudding – how would you describe it?

To me, this recipe tastes like a light and fluffy banana paradise. The banana, vanilla, and cinnamon flavors meld together so that your taste buds adore the results.

Patti LaBelle’s banana pudding is not exactly a healthy recipe. If the pudding is enjoyed in moderation, it is not terribly bad for you, but may not be one of those dishes you plan to eat every day.

This copycat recipe for Patti LaBelle’s Homemade Banana Pudding is absolutely amazing! It is so delicious that it tastes like it is melting in your mouth. I am not typically a fan of banana recipes, outside of banana bread, but this recipe is very delicious. You have to try it in order to understand.

What about making this banana pudding into a pie! Absolutely! This recipe would make a delicious pie. Simply use a prepared graham cracker crust, add your banana pudding layer, and top it off with your cool whip and vanilla wafers. Serve it and enjoy! You could even add a banana layer with sliced banana pieces if you have any extras!

This recipe makes the ultimate banana pudding pie! If you want to make this recipe into a pie, it is super easy to do. If you want you could make a traditional pie crust, or you can use a graham cracker crust. Give this recipe a try for your next gathering!

This recipe can make the perfect dessert for your next get-together. One of the great things about this recipe is that you can make it as elegant or as simple as you want.

Our copycat recipe for Patti LaBelle’s banana pudding is so delicious, that you will have to give it a try to understand just how good it is! This recipe is a very low-cost, dish that can be turned into an elegant dessert for any occasion. Give it a try today and let us know what you think about it!

You may also enjoy: 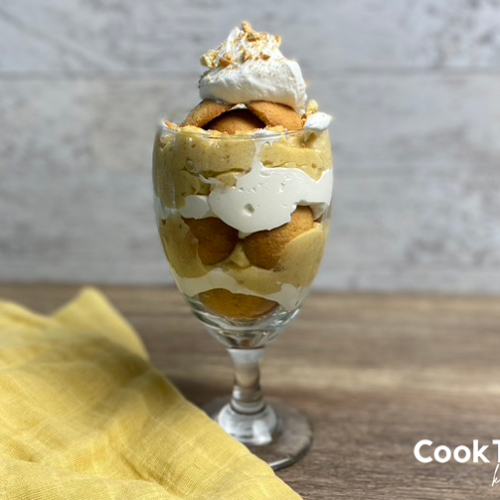