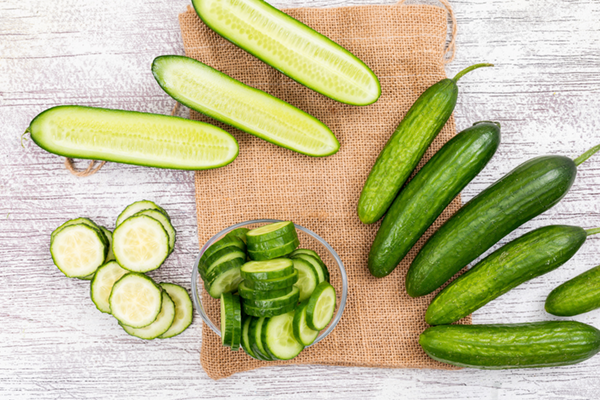 Everything you need to know about zucchini vs cucumber located in one place. Learn about how each one is defined by the five senses, best storage, how it grows, its amazing nutritional value and recipe ideas for you! All of the pertinent details here, just for you, starting with what zucchini and cucumbers look like, and how to tell them apart.

There is also a difference in the type of seeds cucumber and zucchini have. Cucumbers have more pronounced seeds that are larger and tend to be tough to the touch. Zucchini seeds have a spongy texture, that almost blend in with the center of the fruit.

Have you ever considered what a fresh Zucchini vs Cucumber smells like? Mostly it smells earthy. Since they rest on the dirt, they tend to emanate that aroma. The produce themselves don’t really have much of a defined smell no matter if they are raw or cooked.

Cucumbers and zucchini also have differences in texture when you touch them. While cucumbers generally have a bumpy exterior, with a tough skin that feel waxy when you touch them. Zucchini on the other hand, usually have a smooth exterior with a warm, giving skin. Both zucchini and cucumbers have a hollow, but firm feel when you pick them up. They also both have a woody texture to them.

While zucchini and cucumbers are in their raw form, they both have a similar sound. When you cut into them or bite off a piece, you will hear a satisfying crunchy sound. They are both crisp while fresh, and so delicious!

Both zucchini and cucumbers taste delicious in their own ways, the taste of each one is quite different. Cucumbers are very juicy. They have a high-water content and taste sweet. Zucchini on the other hand, have a spongy inside and taste a little sweet with a little bit bitter. They taste the best when cooked, because cooking helps to bring out their best flavor.

Most of the time zucchini is eaten after it has been cooked, but cucumbers are eaten while still raw. There are not many instances when cooking, where they zucchini can be substituted for cucumber or cucumber for zucchini. In general, they are far too different for this to take place. There is however one exception to this rule. If you like the taste of raw zucchini, it can be used in the place of cucumber on a lettuce salad if you desire. It does change the flavor, so it is not very common, but if you can substitute this way, if you really want to. Otherwise, they cannot be interchanged in a recipe.

Cucumbers and Zucchini plant leaves look similar, however the plants themselves are different. Cucumber plants are vine type plants. They grow out of the seed and travel along the ground or up a pole with their climbers. Cucumbers grow out of flowers anywhere along the vine plant. Whereas Zucchini grow up from their seeds and form a plant, the zucchini then grows out from flowers at the base of the plant. Cucumber and Zucchini are both a part of the gourd family.

Zucchini and cucumbers are fairly easy produce to grow at home. If you are considering growing your own garden this year, perhaps you should check into getting these seeds this year. The health benefits might just make it worth it for you.

Zucchini and cucumbers are very beneficial to your health. Both cucumbers and zucchini have low amounts of calories, they are also good sources of vitamins. Based on 100 grams, both zucchini and cucumbers have very low calories. While Zucchini has 15 calories, while cucumbers can vary depending if they have skin or not. But they are anywhere between 12 to 17 calories for cucumbers. Cucumbers have .7g protein and zucchini has 1.1g protein in 100 grams. Cucumbers also have 2.1% your daily value of vitamin A and 4.7% vitamin C. Zucchini has 22% daily value of your vitamin A content, and 22% vitamin C.

While a zucchini vs cucumber are similar, the storage for each one, to keep them the best possible, for the longest amount of time, is quite different. Zucchini can both be stored, whole and unwashed, in your fridge for one to two weeks before they start to become wrinkled. They will not last much longer than two weeks in the fridge. Cucumbers on the other hand should be stored at room temperature. They are best stored above 50 degrees Fahrenheit. It is recommended that if you are going to place them in your fridge, they should not be kept any more than three days.

Some of the top ideas that come to mind on delicious ways to prepare cucumber and zucchini to eat are below. These are just a few, as there are so many good meal ideas that center around these two items.

We trust that this has been helpful and that you have learned something new about Zucchini vs Cucumber. As always, we absolutely love to hear your feedback! One question to leave you with, that we would especially love your feedback on is: What is your favorite way to use cucumber or zucchini?