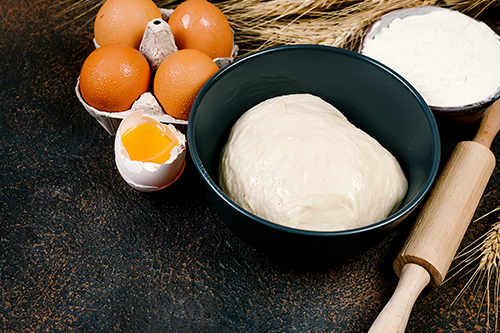 If you enjoy baking, then you have most likely run into the terms “leavening agent” or “leaven”. Perhaps you are a bit confused about what this means, what you should use to make your recipe a success, or even knowing the purpose of a leavening agent. In this article we are going to help you better understand what it is, so that you can be smarter in your kitchen.

A leavener is also a type of leavening agent, or leaven. Leaven is used today in most breads, cakes, cookies and muffin recipes that we enjoy. This part of the dough is what makes it rise and creates the light and fluffy texture that we love about any dough recipe.

There is however, such a thing as unleavened bread. Unleavened bread is primarily eaten during Passover. Some additional examples of unleavened bread would be tortillas and naan bread. Some breads that do not include leaven can still be enjoyed, but overall, we enjoy the soft flakey texture of bread that has been allowed to have risen.

What is a Leavener?

Leaven that occurs from air, is one of the less common types of leaven. This process takes place primarily through ingredients such as egg whites that have been beaten so hard that they begin to expand and create a white fluff. This particular process is often used in angel food cake, sponge cakes, and meringue cookies or meringue pie, to name a few.

Steam that is used for leaven is also another less common type, however it is used for a few recipes. The process for making your delicious puff pastries and choux pastries, use steam to allow the pastries to puff up while cooking. How does this work? When the water from your dough reaches 212F it begins to vaporize. This causes the dough to expand as it bakes, giving you the delicious flakey goodness.

When preparing your puff pastry you will want to be sure to use plenty of butter to create many layers, then fold your layers into book folds. This helps to create the flaky layers in your pastry. As the water in the butter warms, it turns into the steam the pastry needs to expand as it bakes. The same is true of choux pastry, however its process is slightly different which is why it requires cooking the dough on the stovetop before baking in the oven. It will still rise nicely once the steam releases inside during the baking process.

Yeast is one of the most common types of leavening agents. It is primarily used to help make the perfect loaf of bread. Yeast is a biological leavener or leavening agent. It is used to expedite the fermentation process. Not only is yeast used in baked goods, it is also a main ingredient in beer and wine. We are going to focus on the kind of yeast that is used in food preparation.

Each of these types of yeast, speeds up the fermenting process. Ultimately using a fungus that ferments quickly in the dough, and uses the sugar and starch converting it into an ethanol and carbon dioxide substance that makes the dough rise.

Baking soda has several different ways it can be used. To give an idea of its broad uses, here are just a few… Baking soda can be used in place of toothpaste to clean your teeth, to get rid of your smelly carpet, to put out a grease fire (yes, I have tried that one first hand), to fight canker sores, and to be used in baked goods to make them light and fluffy, which is the one we will focus on here.

Baking soda is used as a leaven in quick breads, cookies, muffins, etc., or breads that don’t require allowing them to sit and rise. For example, baking soda is a primary leaven for foods such as banana bread, zucchini bread, and muffins. However, if baking soda is being used, it is important to include ingredients such as lemon juice or buttermilk, otherwise the bread will taste bitter and have a soapy flavor to it.

You might also enjoy learning about What Is Guanciale? Also try our delicious Shrimp Bisque recipe!