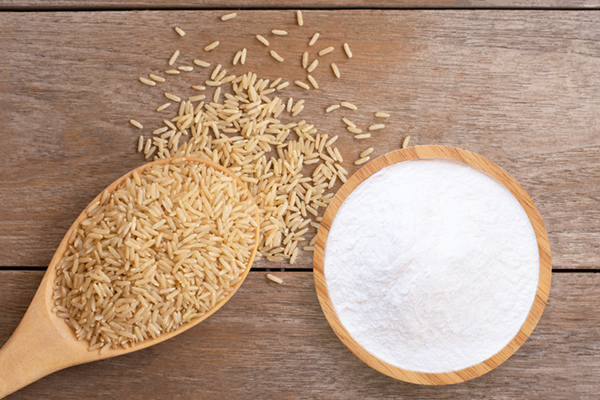 Chances are you’ve come across a recipe that calls for rice flour at one time or another. If that’s the case and you’re in a pinch, you’ll probably be interested in a rice flour substitute. And we’ve got you covered with the 14 best substitutes for rice flour.

But first, let’s look at what rice flour is used for so that we can choose the best possible substitute.

What is Rice Flour Used For?

Here are some things that rice flour is used for, which will help you know if there might be some other uses you might be able to incorporate.

Rice flour is often used as a gluten-free flour option, it’s a staple in Asia and India, it’s used as a thickener for soups, stews, sauces, to make cakes, quick breads, and other non-yeast baked goods. Rice flour has a wide variety of uses.

What Can I Substitute for Rice Flour?

In choosing the best rice flour substitute, first you’ll want to determine the purpose of the rice flour in the dish where it’s used. Is it used as a thickening agent, for a fry crisp coating, for baking, or for something else?

Its purpose will help to determine the best substitute.

The Best Substitutes for Rice Flour

Here are our recommendations for the best rice flour substitutes.

Cornstarch is the number one recommended rice flour substitute because it works for a variety of purposes, is gluten free, and is mostly tasteless.

Cornstarch can be used for deep frying. In fact, it makes a good rice flour substitute for frying, as well as a gluten free thickening agent, and it’s flavorless.

When using cornstarch as a thickening agent, make a slurry first meaning you’ll simply want to mix the cornstarch with some water and stir it until it’s smooth.

Then add the slurry to the dish to be thickened, but you should know that it’s possible that all the slurry might not be needed. Making the slurry first will help to keep from forming chunks.

All-purpose flour makes a great substitute for rice flour when. You’re not cooking for a gluten-free diet.  It can be used as a thickening agent and is perfect for soups, sauces, frying, and baking.

Almond flour is a popular gluten-free flour substitute, and it also works well to use as a replacement for rice flour.

Almond flour is best used in baking, and has a slight nutty flavor, and can be used as a thickener. We recommend avoiding using almond flour for frying because it burns too quickly thus leaving quality to be desired.

Cake flour is made from wheat, so you’ll want to avoid this with gluten free dietary restrictions unless it’s specifically gluten-free cake flour. It’s much like all-purpose flour but with protein that helps to make a light and fluffy cake.

Cake flour has a similar flavor and texture to that of all-purpose flour. It works well for most any purpose including baking and thickening.

Tapioca flour has a mild flavor that won’t overpower whatever dish it’s used for.  It’s good for thickening and baking, but not so much for frying.

Tapioca flour is sweeter than rice flour and has a mild flavor. We recommend using twice as much tapioca flour as rice flour when using it for a substitute.

You can use potato starch, not potato flour as a rice flour substitute. Potato starch is like cornstarch, but it’s made from potatoes.

The best way to use it for a thickener is to make a slurry using 1 tablespoon of potato starch + 2 tablespoons of water to thicken about 1 cup of liquid.

Mix the water and the potato starch together to form a smooth slurry then add the slurry to the dish.

Oat flour can be made at home in a pinch by using oatmeal. Just blend raw oats in a blender or in a food processor until it creates a fine powder.

Oat flour has a similar flavor profile to rice flour. It can be used in baking and as a thickening agent.

Even though oats are naturally gluten-free they’re not always processed in a gluten free facility. So be sure to check your product label for this information if you require a gluten free product.

Buckwheat flour has a somewhat earthy and nutty flavor. It’s gluten free and can be used for baking things like morning muffins, pancakes, or waffles.

Buckwheat flour can be used as a one to one substitute for rice flour.

Chickpea flour can often be found at local health food stores and is naturally gluten free.

It’s an alternative made from garbanzo beans or chick peas, with a slightly earthy flavor that’s good for baking.

Millet flour can be used in place of rice flour when you’re in a pinch, but as far as we’re concerned, it’s not one of best options as a substitute.

Millet flour has a similar flavor to brown rice, which is somewhat sweeter, nutty, and a bit like the flavor of corn. Millet flour can be used as a one-to-one substitute for rice flour.

Coconut flour is a substitute that can be used for rice flour, but the thing is it’s sweeter than rice flour, so you’ll want to keep that in mind when considering whether to use it as an alternative to rice flour.

ratio: use 1/2 the amount called for rice flour

Sorghum flour works as an alternative to rice flour when you’re seeking a gluten-free alternative. But you’ll want to know that it has somewhat of a bitter flavor.

Sorghum flour works well for baking, but our recommendation is its flavor is too overpowering for frying or thickening.

Using arrowroot powder allows one to avoid any corn-based products, if those are a concern or are to be avoided for dietary reasons.

Arrowroot powder can be used to thicken soups, stews, and sauces, and it can be used for frying.

It’s important to know when to just plain leave rice flour out of your recipe. If you’re not sure that any rice flour substitute will help the outcome of your recipe, or you’re afraid it will alter the flavor too much, then knowing when to leave it out is ideal.

Following are frequently asked questions that have to do with rice flour substitutes.  If you have a question that’s not answered here, just drop it to us in the comments box below and we’ll be happy to answer it.

Can You Make Your Own Rice Flour?

Yes, homemade rice flour can be made by pouring 1-2 cups of uncooked rice into blender or food processor and grind it until it becomes a fine powder.

No, brown flour and white flour are not the same because brown rice still has bran intact, but white rice flour is made from white rice that’s been hulled.

Can I Substitute Plain Flour for Rice Flour?

Yes, generally speaking it works well to use all-purpose flour in place of rice flour.

Can I Substitute Cornstarch for Rice Flour?

Yes, substituting cornstarch for rice flour works well as a thickener, for frying, and is naturally gluten free.

Can I Substitute Coconut Flour for Rice Flour?

Yes, you can substitute coconut flour for rice flour, but be careful to not use too much, as it’s not 1 to 1 ratio.

Is Almond Flour the Same as Rice Flour?

What is a good rice flour substitute for frying?

What is a good rice flour substitute for kimchi?

In our opinion, it’s best to leave it out if you’re needing a rice flour substitute for kimchi.

What is a good rice flour substitute for noodles?

Can I replace rice flour with coconut flour?

Yes, you can replace rice flour with coconut flour, however you should know that it has a mild and somewhat sweeter flavor.

Can I make my own rice flour?

Yes, you can make your own rice flour by grinding rice to a powder that serves as rice flour.

What can I substitute for rice flour in shortbread?

What gluten-free flours can I use instead of rice flour?

Some options for gluten-free flours that can be used instead of rice flour are:

Can I use ground rice instead of rice flour?

Some say you can, some say can’t because there’s too much of a difference in texture. However, we’ll leave it up to you to be the judge.

What is the substitute for rice flour in Banneton?

Some of the best substitutes for rice flour in Banneton are, cornstarch, potato starch, coconut flour, almond flour, and sorghum flour.

What can I use instead of rice flour for mochi?