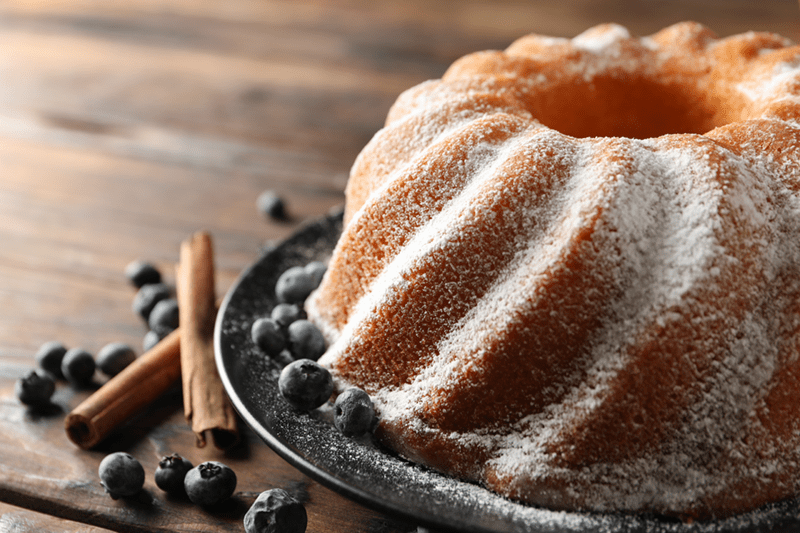 Have you ever wondered why a pound cake is called a pound cake?  Yeah, is it because the cake weighs a pound? Or something else? Every dish has a history and a story to tell, and a pound cake is no different. Let us give you hint, the recipe is in its name.

Now, you might be thinking that seems like it would make a really large and densely heavy cake. And if so, you would be correct. Four pounds of ingredients all in a single cake is a heavy cake. No leavening (rising agent) was included in the original recipe in the 1700s. And several people could be fed from a single recipe. Fortunately, when the cake was baked, some of the water evaporated, resulting in a less than 4 pound cake. But still, that’s one large and heavy cake.

How much sugar is in a pound?
2 cups of granulated white sugar

How many eggs are in a pound?
Typically 8 – 9 eggs. Eggs vary in weight, but eggs are about 2 ounces each.

How much butter is in a pound?
2 cups of butter, or 4sticks

Modern Day Pound Cake
Today, many people continue to find pleasure in the wonderful tradition of creating the classic vanilla cake because of its simplicity and traditionally familiar flavor. However, many alterations in the recipe can be found in the modern-day cake.

Typically a leavening agent is used in present day pound cakes to allow the cake to rise and not be so dense.

Also, the recipe is usually decreased, simply keeping the 1:1:1:1 ratio, but allowing the mixed ingredients to be baked in a single loaf pan.

Flavor alterations such as lemon and sour cream are two of the most popular modifications. And if you want to get fancy, why not add a drizzle of chocolate, a zest of lemon or sprinkling of fruit to add interest as well as visual appeal. The Brits sometimes add a bit of dried fruit; the French sometimes add a swirl of chocolate. Speaking of the French, they call their version of the cake a quatre quarts, meaning four quarters, another way of explaining that the four main ingredients are measured in equal parts.

Making a pound cake can be a fun recipe because it allows for creativity and is not an exact science. So why not give it a try, and then let us know about your creative outcome.