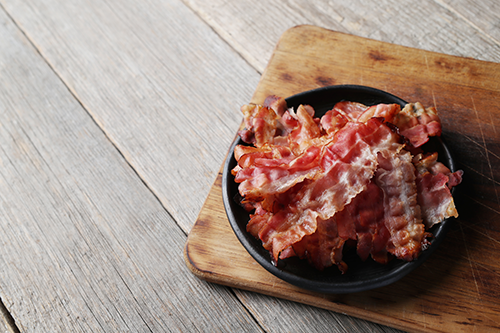 The popularity of bacon is on the rise, and increasing every year. But have you stopped to think, Where Does Bacon Come From? It is that yummy salty food that is good with just about anything!

Where It Comes From

Bacon is meat from the back or belly of a pig, that has been cured or smoked. You can buy it in many different forms, from thick slabs to pre-cut strips. There are also different types of this meat, all from the same place on a pig, but prepared differently around the world.

The American version of this meat, also known as steak bacon by British folks, comes from a fatty side of a pig’s belly. Canadian bacon, which is also common in the United States, is made from leaner meat, located on the pig’s back.

While this meat is primarily a pork product, the word can rarely be used to describe cuts of meat from other animals as well. There is also such a thing as turkey bacon in addition to veggie bacon that is made from soy.

There are all kinds of recipes you can make with this fatty pork meat! Foods that I probably would not have thought to put it on fifteen years ago, are commonplace now. For example lovers of this meat enjoy a sweet and salty mix on treats such as using it in cupcakes, and donuts topped with this pork meat. There are also some delicious side dishes or appetizers featuring it, such as asparagus wrapped in it, or ears of sweetcorn wrapped in this meat. A few amazing dinners featuring the fatty pork, are stuffed chicken wrapped in it, or even tenderloin wrapped in bacon. These are just a few of our favorite ideas!

Bacon comes in many different forms from your local grocery store today. It is a type of fatty pork meat that comes from a pig’s back or belly. The meat has been smoked or cured to give it the extra salty flavor. While this section of pork meat may not be super healthy, it is a wonderfully delicious food, that many people go crazy about.

What is your favorite recipe with bacon?

Now that you know the answer to, Where Does Bacon Come From? Check out our other articles on How To Press Tofu. Also don’t miss out on this Ultimate Guide: How To Spatchcock Chicken! Cooking chicken will never be the same for you!