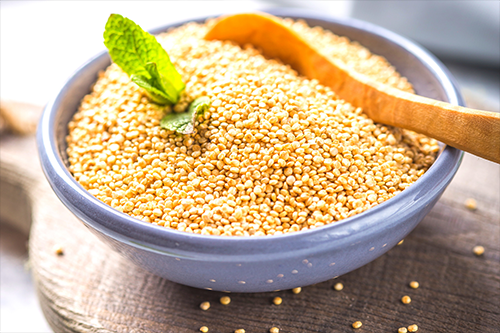 What Is Quinoa? Learn all about this surprising little seed! In this article, we explain what family it is a part of, some of its characteristics, where it grows, its surprising health benefits and more!

Characteristics Of The Seed

Often confused with a grain, the little ball of quinoa that we like to enjoy today is actually a seed. This seed, is also actually a fruit, and is part of the Chenopodium family. It is known as a super food because it packs in so many nutrients. When compared to rice, it has two times the protein. It also contains five times the amount of protein contained in corn. It contains a high value of lysine. Lysine is an amino acid, the seed also has less carbohydrates than grains, with the exception of corn. This little seed possesses six percent fat content, which helps to give it a nutty flavor.

Where It Came From

Not only does the little seed from the quinoa plant taste delicious, it is a great source of nutrients. The rest of the plant has many different uses. This plant was originally grown in regions of Peru and Bolivia. These regions are still the world’s leading producer and consumer of quinoa. It is eaten in a variety of ways, the seeds are sometimes boiled in a pot of water like rice and also eaten as cereal. It is also ground into flour and made into breads, and cakes. Other parts of this plant are used, such as the plant leaves being eaten like a vegetable, to burning the stalks for fuel and even using the leftover water from washing the grain before cooking, as a shampoo. There are a lot of different uses for the plant, so much so that it is hardly ever simply discarded.

Although originally grown in Peru, Bolivia and around the Andes mountains, the plant is quite hardy and therefore able to be grown in all kinds of environments around the world. The quinoa plant can grow in places where it is very difficult to get corn or wheat to survive. In the United States, quinoa is primarily grown in Colorado, where it continues to grow and produce seeds, year after year, despite the hardships of producing other crops in such an agricultural environment. The heartiness of the quinoa plant can be found no matter where it grows. This amazing plant fights against the low rainfalls, below freezing temperatures, high altitudes and poor soil conditions. The only downer of growing it is that the harvest process is quite involved and requires a lot of labor to complete.

The small round seeds look a bit like sesame or millet seeds, except when quinoa seed’s growth are covered in something called saponin. This is a bitter resin that forms into a soapy mixture in water. To be able to eat quinoa seeds, this resin must be removed by washing the seeds in an alkaline solution. Quinoa that has been purchased from the store will have had this process completed already and the saponin should be mostly removed. However, you will notice that most cooking instructions say to rinse your seeds before cooking. This is why, and there could still be some saponin on the seeds. By rinsing again, if any remains, it should be removed and this will prevent any bitterness from making it into your dish.

When the quinoa seeds are freshly picked, they are in a wide array of bright colors. The fresh seeds can be found in bright red, brilliant violet, a dark blue and even a rusty orange. Once the seeds are processed and the saponin is removed, the remaining seed is a pale yellow color no matter what the outer color was. The exception to this is red quinoa, which remains red regardless of the processing.

Before cooking, the seeds will be disk shaped and flat. They have a white band around their middle. Once they begin to cook, this band comes off and the little balls expand into a small spiral that has a nice texture.

Quinoa has a natural nutty flavor, and is a great complement to most any dish. These seeds are great in salads, and can often times replace lettuce there. They are also great when paired with mushrooms, onions and garlic or you can try making them into a sweet mixture with sugar and cinnamon. No matter what you choose, these little seeds are amazing in a variety of ways. I have yet to encounter a dish that I didn’t like. Try experimenting with them in your kitchen and determine how you prefer to use them!

Summary: Quinoa are small little seeds that grow on a plant that can be used in a variety of different ways. In the Andes region where the plants were first grown, not one part of the plant goes to waste. These little seeds are a fabulous replacement for grains and are even better for you because they have so many health benefits.

What is your all time favorite quinoa recipe?

If you have never tried these little seeds, I would highly encourage you to pick up a package the next time you visit your local grocery store. Many packages have recipe suggestions right on the back. You can also check out our recipes as we enjoy incorporating quinoa into our meals.

Check out some of our favorite quinoa recipes including Breakfast Quinoa With Dried Cranberries Toasted Walnuts And Honey, and Lemon Quinoa With Asparagus and Feta. Also learn more about What Is A Turnip? Don’t miss out on this delicious recipe for Lentil Tomato And Red Pepper Salad With Cilantro!

1 thought on “What Is Quinoa?”