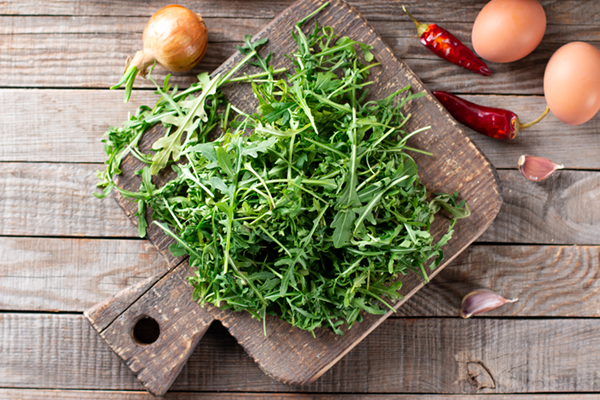 What is arugula? Arugula is a dark green leaf that is also called rocket, roquette, rugula and rucola. When the leaves are young, they are small, dark green and tender. But as they mature, they become large and somewhat tough. Arugula is a member of the mustard family, but it is not as bitter as mustard greens. The flavor is often described as peppery and a bit nutty. The best dressings that pair with it are those that are citrus based or those enhanced with sweeter vinegars like balsamic.

Is Arugula A Lettuce?
Being a part of the mustard family, it is not scientifically classified as a lettuce like romaine, iceberg, butterhead and loose-leaf lettuce are. However, it is found in many already mixed salad greens such as mixed greens or spring greens.  It typically appears with butterhead and loose-leaf lettuce in various already prepared mixes found at the supermarket.

What Does Arugula Taste Like?
Fresh arugula has a distinctive spicy taste that enhances the flavors in dishes. It can be used in salads, pastas, sandwiches and sauces. Depending on the stage of the maturity of the greens, the flavor can be described as tart, peppery, nutty, and slightly bitter.

Which Is Better Spinach Or Arugula?
Spinach leaves are heavier, thicker and denser than arugula leaves. If you’re looking to compare the protein, calorie or fiber content of both vegetables, the results are very similar. However, if you’re interested in comparing vitamins and minerals, then the winner is spinach. It has more vitamins such as A, C, K, folate, potassium, magnesium and iron. And so the saying, the deeper the color of the vegetable, the more nutrient dense it is, typically holds true.

Are Arugula And Dandelion Greens The Same Thing?
No. Though arugula and dandelion greens resemble each other in appearance with their pointy-tipped, oak shaped leaves, they come from two completely different plant families. Arugula is a part of the Brassicaceae family, whereas dandelion belongs to the Asteraceae family.

Is Arugula A Superfood?
Though it has a lot in common with other leafy greens, it comes with its own unique powers that gives it a superfood quality that help punch up whatever dish you use it in, to the next level. It is a nutrient-rich food, meaning it is high in nutrients and low in calories and fat. There are so many health benefits provided by arugula that make it worthy of your consideration as an addition to your next dish.

Health Benefits
There are many health benefits, including the following: