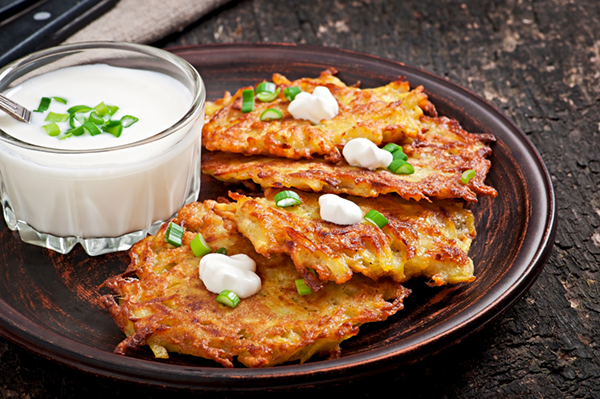 A latke is a formal name for a potato pancake. Some people think a latke is strictly a Jewish dish, but actually potato pancakes of various kinds exist in most potato-eating regions around the world.

You can make a basic latke by: grating fresh potatoes with a box grater and frying them in oil, until nicely browned on both sides, and seasoning them with salt and pepper to taste. Some latke recipes add eggs, chopped or grated onion, flour, minced garlic, milk, butter or herbs and spices to the preparation.

Latkes can be eaten as a side, plain as a snack, with a salad, topped with sour cream, or as an accompaniment to roasted meats. The Polish stuff them with a goulash mixture. Jews eat them during Hanukkah, but only because they are fried, not because they play a special role in the religious holiday. The Swedish add grated potatoes to a pancake batter, while Germans and Austrians eat them with garlic, salt, and butter.

Potato pancakes can also be made by simply dropping a pile of grated potatoes into hot oil and frying on both sides until cooked through, then seasoning them with salt and pepper while they’re still hot.

What is your favorite way to make and eat a latke?

You might also like:
Best Loaded Potato Salad
Why is it called a pound cake?
What is a latke?