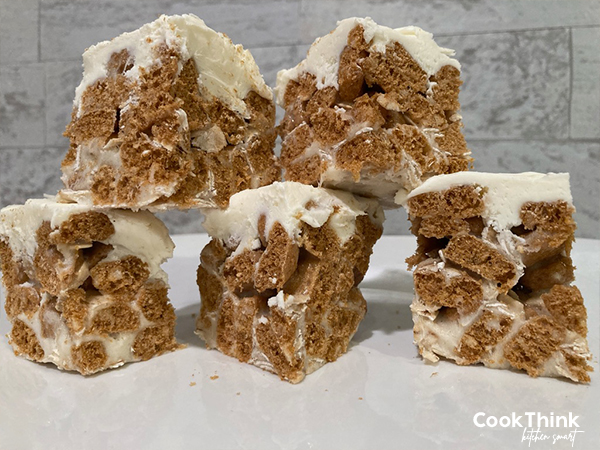 Recently, Kellogg’s partnered up with Little Debbie to create Oatmeal pie cereal. If you love oatmeal crème pies made by Little Debbie, you’re probably going to want to pick up a box of cereal at the grocery store and give it a try. If you love it, you’ll probably want to come up with  a variety of ways to consume it.

When early taste tests came in, some people were excited about the new cereal and others weren’t as enthused. It seems that the greatest difference the contrast of the texture of the Little Debbie Oatmeal Crème Pie being soft and chewy and the cereal is made crispy, like cereal is.  On the other hand, some say the flavor is fantastic! You’ll want to try it for yourself to get in your taste test and make your own verdict.

Kellogg’s Little Debbie Oatmeal Crème Pies Cereal can now be found in grocery stores such as Walmart. You can also find it through online vendors.

When Kellogg and Little Debbie team up, the results can be wonderful. Kellogg’s is manufacturing cereal that resembles the classic oatmeal cookie aroma, all of the spices, as well as the hints of crème that are found in the popular Little Debbie Oatmeal Crème Pie convenience snack.

Your Favorite Little Debbie Snack Is Now A Cereal

You might have fond memories of eating Little Debbie Oatmeal Crème Pies. Maybe they were your favorite little Debbie Snack. If that’s the case for you, you’re going to want to capture the essence of flavor and experience this new cereal.

Oatmeal Pie Cereal is the first ever Little Debbie Cereal. If you fondly remember eating their Oatmeal Crème Pies as a kid, perhaps they’re making your childhood dreams come true. I remember having them packed in my school lunches in the 1980’s.  And they were available as a popular item in the school vending machine. How smart of Kellogg’s and Little Debbie to team up and tap into our nostalgia.

First off, we encourage you to try it for yourself, before coming to conclusions based on anyone else’s opinions. There are many reviews of the cereal posted online on the Kellogg’s website. Some people love it and others don’t care for it. But the best way to know is to find out for yourself.

Kellogg’s Little Debbie Oatmeal Crème Pies Cereal has a classic oatmeal cookie aroma, including spices and notes of crème. It gives you a spoon full of timeless classic taste and cinnamon flavor.

Whether you like Oatmeal Pie Cereal is going to depend on your personal preference. We think it’s tasty, but each person has their own opinion.  If you’re comparing it side by side with Little Debbie Oatmeal Crème Pies, you might not think the resemblance is so good because the textures are so different with the convenience snack being soft and chewy and the cereal is puffed and crispy. However, we encourage you to give it a fair shake before coming to your own verdict.

Anything Else You Need To Know?

We personally think that the cereal tastes the best if you’re not expecting it to taste like miniature Little Debbie Oatmeal Crème Pies. Set that expectation aside first.  It tastes more like cinnamon or spice cake. The flavor is delicious!

We tried them and we think they’re delicious. They’re so good that you’re going to find other ways to consume them.  That’s why we’re including our Oatmeal Pie Cereal Bars recipe below.  It’s another tasty way to eat them.

Kellogg’s and Little Debbie Are Personal To Me

I remember taking a trip to Battle Creek, Michigan when I was in first grade. Our class took a field trip tour of Kellogg’s cereal plant. That was several years ago. And when I was in elementary school, my mom often packed Little Debbie snacks into my lunch for special occasions. Both accounts are good memories.

The oatmeal crème pies cereal doesn’t taste much like oatmeal or crème is often one of the top complaints of reviewers. In our opinion when you’re trying the cereal, you need to set aside the comparison.

We’re among the group of people who think still, the oatmeal crème pies cereal is delicious. Set aside your expectations and give it a try. Taste the cereal for what it is.

Oatmeal cream pie cereal bars are made with a combination of Oatmeal Pie Cereal, marshmallows, butter, oatmeal, and cinnamon. They are topped off with a layer of your favorite flavored frosting for a delicious sweet treat.

These little cereal bites were created to imitate the Little Debbie prepackaged Oatmeal Cream Pies. You know those ones that you can buy in the vending machines or your kids’ concession stand at the ball game? Kellogg’s has attempted to pack all the flavor from those cream pies into a cereal. Using this cereal will give your cereal bars that crispy oatmeal flavor.

We recommend strengthening the oatmeal flavor by adding a cup of old-fashioned oats to the recipe. This is optional, but if you’re going for that oatmeal flavor, it will be perfect.

You can use large marshmallows or mini marshmallows for this recipe. We don’t recommend using the oversized marshmallows that are made for smores though. Those are more time consuming when cooking, to reach the melted stage.

Using plain salted butter is what we recommend. Other butter substitutes such as margarine or oleo can alter the flavor and their texture when melted is also altered compared to butter.

Cinnamon is optional for the cereal bars. If you like the flavor of baked cinnamon oatmeal or baked oatmeal pies with cinnamon, adding a pinch of cinnamon will help to give your cereal bars that desired boost of flavor that you enjoy.

You can make homemade vanilla frosting or buy a can of store-bought frosting. Either works well.

Step One: Prep Your Equipment

Prepare your equipment. Making the cereal bars can be a sticky job. To help keep your ingredients from sticking to the mixing bowl and the square pan you’ll pack them into to set up, you’ll want to make a couple of preparations.

Prepare the mixing bowl by spraying it with non-stick cooking spray or by rubbing cooking oil in it. If you’ll be using a spoon or spatula to do the mixing, you’ll also want to grease it.

Melt the butter over low heat, so that it doesn’t burn. Once the butter is melted, you can add the marshmallows to the saucepan. Stir them until they’re completely melted.

Step Three: Mix Everything Together

Step Four: Spread into Pan and Top with Frosting

Spread the cereal bar mixture into the greased pan or pan lined with greased parchment paper. It’s important to let the cereal bars cool completely before adding the frosting or the frosting will melt. Once cooled, spread the frosting, and allow the bars to set for about an hour before removing them from the pan and cutting them.

1. In a greased mixing, combine cereal and oatmeal.

3. Add a dash of cinnamon if desired. Pour melted marshmallow mixture over cereal in the greased mixing bowl until it is well coated.

4. Spread cereal mixture into greased square pan or pan lined with parchment paper and press into pan to spread evenly.

5. Let cool completely before spreading frosting over the top.

6. Let rest for 1 hour. Remove from the pan and cut into squares.