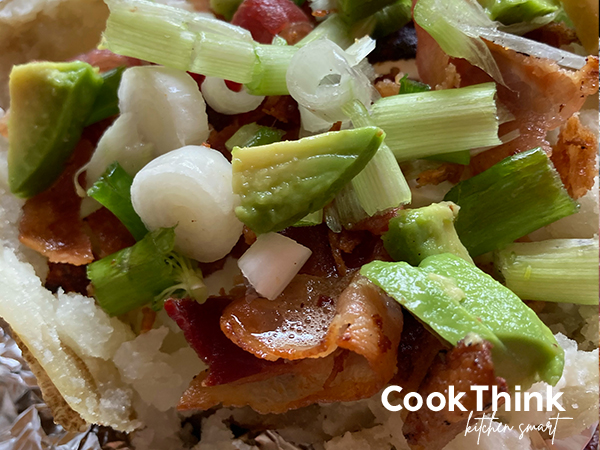 Turkish Potato Recipe makes a wonderfully delicious meal. Imagine a perfectly cooked baked potato with a fluffy and moist inside, and a crispy golden outside. Then add delicious garlic butter and mozzarella cheese mixed throughout the potato flesh. Top it with all of your favorite toppings and enjoy!

What is Kumpir? Kumpir is a baked potato with cheese, the Turkish version of the UK’s jacket potatoes. Kumpir is popular Turkish street food that is served with an endless amount of vegetarian or meat toppings and sauces to choose from to boot.

The flesh of the baked potato is used to create a deliciously soft, cheesy, and creamy filling, upon which toppings of choice are added.

Kumpir is unlike the jacked potato, which is usually served with cheese, beans and butter, there are many different side dishes to go with the potato.

Ingredients You Will Need to Make This Recipe

Does My Baked Potato Have To Be a Russet?

No. Any kind of potato that bakes well and has a fully and fleshy interior will work just fine. We use a Russet because they’re large, work great for baking and make an entire meal. You can choose something smaller if you prefer.

What Are the Best Baked Turkish Potato Recipe Toppings?

The toppings for this recipe are unlimited. Just as many people have different preferences, so are the toppings that would work for this Turkish Potato recipe. Here are some ideas:

My Top Tips for Making This Turkish Jacket Potato Recipe

1. Choose a good potato for baking. High starch potatoes such as the Russet and King Edward are best for baking. Their texture on the inside will be nice and fluffy which leads to wonderful deliciousness.

2. Take the time to let the potato cook all the way. No one like a raw potato. These are excellent when completely cooked.

3. Mix the garlic butter and mozzarella into the potato flesh after it’s cooked. It will kick the potato up a notch compared to a plain old baked potato.

4. Season the potato skin before cooking the potato. It makes for wonderful eating too.

What Is The Best Potato For Turkish Baked Jacket Potatoes?

Do You Need To Wash The Potato Before You Cook It?

It is a good practice to wash a potato before you cook it. Particularly if you plan to eat the skin, you should wash the potato. Keep in mind that the skin houses a lot of nutrients in potatoes that are good for you and are often deliciously crispy if cooked in the oven or the grill. Personally, I can’t resist eating the skin of a baked potato, so I always wash them first. To keep from having to experience that gritty sensation.

The easiest way to wash a potato is simply by holding it under running cool water. I often use a kitchen scrub bud to scrub mine. Then I rinse it under the running water to remove any debris that I’ve loosened.

How Long Should You Cook A Baked Potato?

If you’re cooking them in the oven or on the grill, you’ll need to allow an hour at 400 degrees.

If you’re using the microwave, it can potentially be done in 4 minutes. It will take longer if you have more than 1 potato to cook in the microwave.

What’s The Best Way To Store A Turkish Baked Potato?

How To Reheat Turkish Potato Recipe?

The best way to reheat Turkish Potato Recipe is to place the potato directly on the oven rack  and heat at 350 until warmed through. The amount of time it takes will depend on the thickness and volume of the potato. It is best to check it every few minutes to keep it from burning.

What to Serve With Turkish Baked Potato Recipe

The size of the potatoes you use will determine whether you even need something to go with your Turkish Potatoes. For example, I’ve seen Russet potatoes that were a half pound or more.  These guys are so filling that nothing additional was needed to go with them. Just load. Them up with delicious toppings and you’re good to go.

However, if you’re looking for something to eat with your Turkish Jacket Potatoes, things like ham, roast beef, pulled pork, steak, a side salad, fruit salad, French bread or a dinner roll are all good options.

Is It Better To Bake a Potato In the Oven Or In A Microwave?

It depends. If time is of the essence, then you’ll want to consider the microwave because a baked potato can be cooked in about 4 minutes in the microwave. If you’re cooking more than 1 potato at a time, you’ll need to add more cook time. A rule of thumb, as a starting point, for calculating how much time to cook baked potatoes in the microwave is to use 3 minutes per potato. Don’t forget to poke holes in them before cooking them.  And don’t use foil. Foil and the microwave don’t mix well!

The drawback to cooking baked potatoes in the microwave is that they don’t have as nice of a consistency on the inside and don’t get as crispy on the outside like they would if they were baked in the oven. But if you’re in a hurry and you don’t want to wait an hour for them to cook, the microwave might be your best bet.

My personal preference is to cook a baked potato in the oven or even on the gas grill. It allows for a nice fluffy but moist inside as well as a crispy outside. They’re so delicious this way! The drawback to cooking baked potatoes in the oven is that it takes a long time. For a nice sized, baked potato it usually takes about an hour for them to cook. Use a 400 degree oven, poke holes and wrap the potatoes in foil.

No. Turkish Potatoes, or any baked potato for that matter does not cook faster in foil. The purpose of using foil is to help hold the moisture in while the potato is baking so that the skin doesn’t turn crispy too quickly.

At What Temperature Is A Baked Potato Done?

The best way to tell if a baked potato is done is to poke it with a fork. If the fork goes it easily and the potato feels soft, then it is. Probably done. If the internal temperature of a potato reaches 210 degrees, it also indicates that it’s done. Allow them to cook for the full amount of time. Most people don’t enjoy potatoes that are not fully cooked, so it’s important to take the time and care to make sure they’re done before serving them.

Do You Put Oil On Turkish Baked Potatoes?

Some people say yes, some say no. We say it’s up to you to decide. The purpose of oil rubbed on the skin of the potato is to help it become crispy in the baking process. Butter seasoned with salt or seasonings is also an alternate solution that will achieve the same goal.

Do You Have To Poke Potatoes Before Baking?

The purpose of poking holes in a potato before baking them is to let the steam out and keep the potato from exploding. It is often a step that I forget to do and so far I’ve not had any potatoes explode on me, but it’s a great step to include if you can remember to do it.

I would say that’s going to depend on the toppings you add to your baked potato jacket. The baked potato itself is healthy. Potatoes, including the skin contain fiber, protein, vitamin B6, Potassium, Vitamin C, Folate and Magnesium. Potatoes are also a good source of iron and zinc.

Can I Make Sweet Potatoes With The Same Method?

Yes. Sweet potatoes can be washed, poked with holes and wrapped with foil, then baked in the oven. Top with your favorite toppings just as you would for the Turkish Potato Recipe.

Do I Need To Wrap Potatoes In Foil?

No. You don’t have to wrap them in foil. The purpose of the foil is to keep the steam in as the potato cooks, giving it a more moistened skin. If you do not wrap potatoes in foil, you can expect to get a crispier skin.

Can I Make Microwaved or Instant Pot Baked Potatoes?

To cook in an instant pot, arrange potatoes on the trivet and add water. Cover cooker with lid and lock into place. Turn handle to sealing position. Select manual pressure-cooking setting and set for 12 minutes. Please note it could take up to 12 minutes for the cooker to come up to pressure and begin cooking.

Can I Make Vegan Baked Potatoes?

Yes. Plain baked potatoes are naturally vegan. They defray from that goal when other things are added. Be careful to not use any dairy or animal products in your topping selections to maintain your baked Turkish Potato’s vegan status.

How To Make Turkish Potato Recipe

2. Scrub the potatoes well with water, to remove any dirt, and dry them with a paper towel.

3. Using a fork, pierce each potato several times and wrap each one in a piece of aluminum foil.

4. Place on a baking sheet and bake in a 400 degree oven for 60 minutes, or until tender. The tenderness of the potato can be checked by poking it through the foil with a fork.

5. Next, combine butter and garlic then set aside.

6. Cook 2 slices of chopped bacon until crisp. This can be done in a frying pan on the stovetop, in the oven or on the grill.

7. Open the foil from the potatoes and allow them to cool slightly. Slice the potatoes in half lengthwise, using a sharp knife. The cut should only be about halfway through so that the two pieces do not separate, but the potato remains one.

8. Place 1 tbsp of garlic butter and a small amount of mozzarella cheese, plus salt and pepper to taste inside the potato and fluff with the flesh, using a fork.

9. Add remaining cheese and mix until smooth. Then add desired toppings and enjoy! 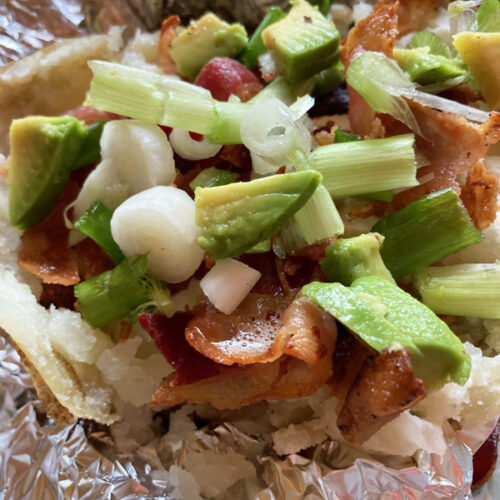