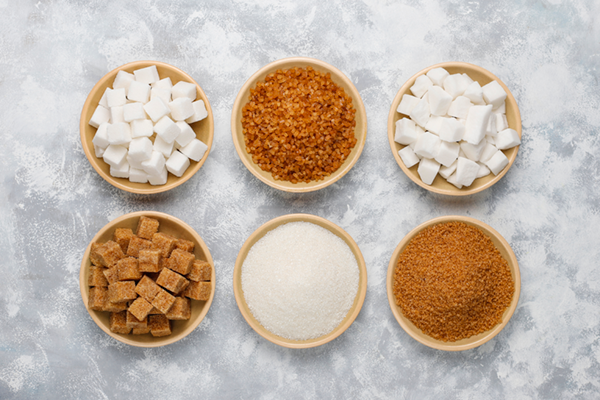 Various kinds of sugar are made from extracting sugar juice from the sugar beet or sugar cane plants and processing it different ways for different outcomes. In the example of brown sugar, molasses is added during processing which changes the color and appearance as well as gives it different functionality. Different sugars have different purposes and uses from in foods and drinks. The following is A Complete Guide To 14 Kinds Of Sugar And How To Use Them:

1. White Granulated Sugar is also known as table sugar. It is commonly found at the grocery store and is frequently used in cooking and baking.

2. Sanding Sugar has granules that can be large or small in size. It is created to reflect light and give a sparkly appearance.

3. Powdered Sugar is also known as confectioner’s sugar. It is typically a regular granulated sugar that has been ground and sifted into a fine powder. It can be sprinkled on desserts and usually is used for making icing. It is known for its stiff and smooth properties.

4. Coarse sugar is milled in larger pieces and is often used to top baked goods such as muffins and cookies.

5. Fruit Sugar is most often used in store bought dry mixes such as cakes and puddings and the like. Fruit sugar is somewhat smaller than granulated sugar in size.

6. Castor Sugar is a superfine sugar that dissolves well in cold beverages and can be used in cocktails to make a simple sugar.

7. Baker’s Special Sugar is designed specifically for baking. It dissolves easily and much faster than plain granulated sugar.

8. Light Brown Sugar has a small amount of molasses added to it to make it brown and moist. Whereas dark brown sugar has more molasses added which gives it the darker color in appearance. One could make their own brown sugar by adding molasses and mixing it thoroughly. Using brown sugar gives the final product a deeper more complex rich flavor.

9. Dark Brown Sugar has a larger amount of molasses added. It tends to give a product a deeper more toffee like flavor. Dark brown sugar is perfect for richer recipes such as caramel corn or baked beans.

10. Turbinado Sugar is golden in color and is more coarse. It is made from a non-genetically modified sugarcane that has been organically grown. It is partially refined and includes molasses for a hint of a caramel flavor. It is sometimes incorrectly referred to as raw sugar, though it is not because it has been somewhat refined to remove dirt and other debris. Because it is organic, It is more expensive than regular granulated sugar, costing sometimes 2 – 3 times more.

11. Muscovado Sugar is one of the least refined sugars available. It is very dark brown in color from the addition of molasses and has almost a toffee flavor, with a bitter after taste. It is often used to give confections like cakes and cookies a deeper, richer value.

12. Demerara Sugar is made from sugarcane and has large grains which gives it a nice crunchy texture in baking. It is golden brown in appearance and is used to flavor drinks or top off muffins or cookies.

13. Liquid Sugar is used to sweeten drinks like coffee, tea and cocktails. It is created by using a 1:1 ratio of white granulated sugar and water.

14. Inverted Sugar is a liquid sugar made from granulated white sugar and water. It is created with a process that involves mixing sucrose with water and heating it until the bonds between the glucose and fructose break. This creates a thick, sweetened syrup. It is typically used as a beverage sweetener, food or candy sweeter and more.

Thanks for reading A Complete Guide To 14 Kinds Of Sugar And How To Use Them. You might also be interested in:
What Are Sweetbreads?