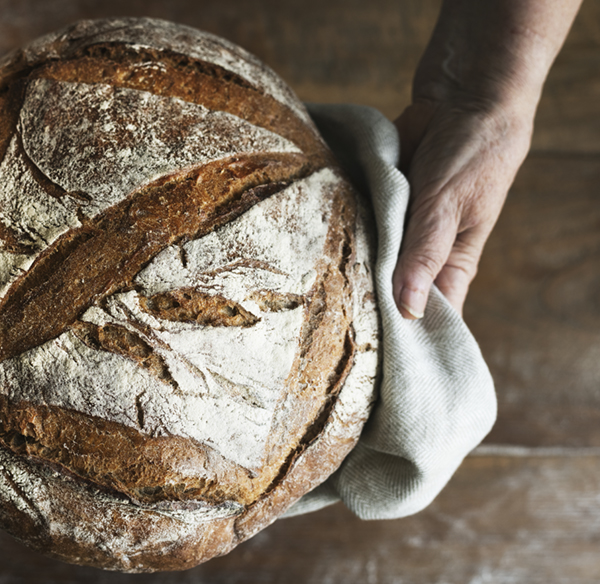 Bread tends to be one of the many staples in diets around the world. But if you’re entertaining someone who eats a vegan diet, you’ll want to know the answer to the question is bread vegan.

We’ll help you know what to look for in breads as well as what makes them vegan-friendly and what makes bread not vegan. We’ve gathered a list of specific brands of vegan bread to look for in the grocery store.

We simply recommend that you become a savvy study of the bread ingredients that vegans avoid and watch labels for those items.

Is All Bread Vegan?

No, not all bread is vegan. Some breads contain add-ins that are not vegan friendly, and some contain dairy, eggs, or fillers and stabilizers as basic ingredients.

What Kind of Bread Do Vegans Eat?

Vegans can eat any bread that doesn’t contain dairy or eggs as well as processed ingredients. You’ll want to study our list below of what makes a bread not vegan.

Whether bread is plant-based is going to depend on your definition of a plant-based food.

We suggest that a plant-based food item is one that contains no animal products or by products and is minimally processed.

What Makes a Bread NOT Vegan?

There are two main things that would disqualify breads from being vegan. If the ingredients contain animal products or if they contain processed foods, in either case these would not equate to a vegan friendly product.

Here is a list of ingredients that should be avoided for vegan friendly breads.

How to Tell Whether a Bread is Vegan

Most Common Types of Vegan Bread

We’ve researched the most common types of vegan bread so that we could share this list with you. Here it is.

Following is a list of grocery store bread offerings that you can purchase without having to make your own. We always recommend checking labels as some varieties within these brands can contain egg.

Looking to make your own bread? Here some of our favorite vegan bread recipes:

Can Vegan Bread Be Frozen?

Yes, vegan bread can be frozen. The best way to freeze bread is to seal it in an airtight container or zipped freezer bag and store it in the freezer.

Our preference is to wait and slice the bread after it comes out of the freezer to help keep it from drying out.

Following are frequently asked questions that relate to is bread vegan. If you have a question that’s not answered here, feel free to drop it to us in the comments box below and we’ll be happy to answer it.

What breads do vegans eat?

Vegans can eat a variety of breads as long as they don’t contain any animal derived ingredients or processed foods.

Yes, some bread such as wheat breads can contain honey. Bread that includes honey is not vegan-friendly as honey is an animal by product.

Why is bread not vegan?

Bread that’s not vegan contains animal by products such as dairy, eggs, or honey to name a few. There are many breads that traditionally don’t contain these products and would be safe for vegan eaters to consume.

Yeast is an interesting ingredient because it’s actually a fungus. Yeast is generally considered plant based and is usually eaten by vegans.

Thomas New York Style Bagels are vegan as well as other bagels that don’t contain animal derived products. Check their label to be sure.

There are some brands of English muffins that are accidently vegan. Again, be sure to check the ingredient list to know for sure.

What bread is traditionally made with basic ingredients such as flour, yeast, salt, and water. It’s the soft fluffy bread that everyone loves.

White bread that’s simply made with these basic ingredients is vegan. However, we always recommend reading labels to be sure.

Sourdough bread is a bit different from regular yeast bread because it uses a fermented mixture of flour and water that causes the dough to rise, rather than requiring yeast.

Sourdough bread is made of basic ingredients that are usually vegan friendly.

Wheat bread is sometimes vegan. Although it contains similar ingredients as white bread, wheat bread sometimes includes honey which would eliminate it as an option for a vegan-friendly diet.

French bread is typically vegan and consists of basic ingredients of flour, water, yeast, and salt. It’s how the delicious bread is made that gives it its crusty crust that many have grown to love about French bread.

Ezekiel bread is a brand of bread that’s always vegan. It comes in gluten free varieties as well and has become popular among those who are known to make more healthy food choices.

Although potato bread is typically vegan friendly, you’ll want to check the ingredient list to be sure that your particular brand falls into this category.

Pita bread is usually vegan friendly. Pita is a flat bread known for its pocket like structure that works well for stuffing with various items to make it into a sandwich.

Naan bread is not usually vegan friendly because it almost always contains eggs and dairy. If you’re following a vegan diet, you’ll most likely want to steer clear of naan bread.

Focaccia bread is a delicious bread that can be made easily. The simple list of ingredients causes it to fall under a vegan friendly option.

Here is our recipe for homemade copycat Panera Focaccia Bread.

Challah bread is a fancy braided bread that is deep golden in color. It’s made with eggs and sometimes honey is used as a sweetener. Challah bread is not usually a vegan friendly food.

Brioche bread is a gourmet kind of bread that many enjoy for toast and sandwiches. It’s not usually vegan because it contains ingredients such as butter, eggs, and milk which are animal products.