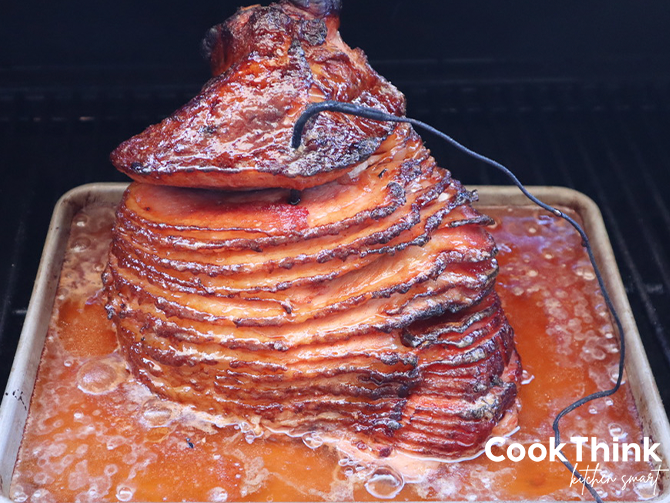 Learning how to smoke a ham is a fabulous way to make ham that everyone will love! Making smoked ham is very simple, and it tastes amazing. Be sure to check out the step-by-step process on how you can easily make it!

Once you have tried smoked ham you will never go back. Learning how to smoke a ham is very easy, and can be a fun way to mix up your holiday meal, or simply to enjoy your ham for any occasion.

You can get fancy and make your own brown sugar glaze, or even use the packaged glaze. You may also choose to use pre-smoked spiral sliced ham, or smoke a raw ham. There are so many different ways you can make delicious smoked ham, and have a fabulous tasting meal.

How to Smoke a Ham Perfectly

Like any good smoke recipe, the key to making the best smoked ham is to smoke it low and slow. You will also want to be sure to keep your ham moist, then add your glaze between each slice of the ham so that every little bit of the ham gets a delightful taste.

Smoking a Raw Ham Versus a Pre-Cooked Ham

There are two main ways you can smoke a ham. This will vary depending on if you are using a raw ham or pre-cooked ham. Our preference is to use the pre-cooked ham as it goes much faster, and seems to have more flavor. However, both ways work out well. Let first look at how to smoke a whole raw ham.

How to Smoke a Raw Ham

To cure a ham you want to create a brine. This is a mixture of water, salt, and other spices. You can make a good brine by taking a large pot, first make sure your ham will fit into it, and add water. Add salt and equal amounts of sugar. You can also add a pinch of dried rosemary, a chopped onion, ground pepper, some red pepper flakes, and some bay leaves if desired. Bring your mixture to a boil, remove it from the burner and allow it to cool, then add your ham.

Cover your pot and allow it to soak for one day for each pound of ham. Remove your ham from the mixture and pat it dry. Place your ham into the fridge overnight to allow it to dry.

Now your ham is ready to smoke. Preheat your smoker to 250°F. Once preheated, place your ham flat side down on a rimmed cookie sheet. Pour chicken broth over the top of your ham. Make sure that your ham is covered in the liquid. Do not overflow your pan.

Your ham will be fully smoked when it reaches an internal temperature of 145°F (62.8°C).

At this point, you can either wrap your ham in aluminum foil and allow it to rest, refrigerate the ham and serve later, or allow the ham to rest for a few minutes then serve and enjoy.

How to Smoke a Pre-Cooked Ham

If desired you can score the ham. This is not a requirement.

Step 3: Put the ham in the smoker

When your smoker is preheated, take an edged cookie sheet and place it in your smoker. Add your ham flat side down. Cover your ham with chicken broth. Be sure to pull the slices apart so that you can brush the chicken broth inside.

Step 4: Smoke and baste the ham

Close the lid and allow your ham to smoke for 2-3 hours. Check on your ham every 30 minutes and baste the entire ham each time with the liquid in your pan. This will help to keep your ham from drying out.

When your ham is close to reaching 140°F and is warmed through, prepare the glaze.

Step 6: Brush the ham with glaze

Brush the entire ham with your prepared glaze. Be sure to pull the slices apart, and brush with glaze in between the slices as well. Continue smoking a ham for another 10 to 15 minutes after the glaze has been brushed on. Then remove your ham and allow it to rest.

Step 7: Slice the ham and serve

If your ham is not sliced, go ahead and slice your hand at this time. Place on a serving platter, and serve. Now it’s time to enjoy your delicious smoked ham!

How to Make Brown Sugar Glaze

If you wish to use a glaze other than the package glaze that comes in your ham, you can easily make your own brown sugar glaze. Some people prefer making their own, and others enjoy the convenience of using the packaged glaze. To make your own follow the instructions below.

In a small saucepan melt one stick of butter. Once melted add ½ cup brown sugar, ¼ cup apple juice, and ¼ cup maple syrup. Stir until sugar is dissolved. Over medium heat, bring your mixture to a simmer stirring continually.

Allow to simmer for approximately five minutes or until your mixture begins to thicken. This may take up to 10 minutes. Remove from the heat and brush your ham with the prepared glaze.

Wood Choice. What is the best wood for smoking ham? When it comes to choosing your wood chips, or wood pellets it can be confusing to know what flavor would be the best for your smoked ham. The kind of wood you use will impact the overall flavor of your ham, which is why this is important. We recommend using apple, cherry, or hickory wood for the best flavors when making this recipe.

Side Dishes. What do you serve with smoked ham? Determining what you should serve with your smoked ham may depend on if you are preparing your ham for a holiday gathering, or simply smoking your ham for fun. Below we have several ideas that you could make to serve alongside your delicious smoked ham.

What to Serve with Smoked Ham

Refrigerator. Smoked ham may be refrigerated to keep it for a longer amount of time. To refrigerate smoked ham, transfer it to an air tight container, or seal it in a plastic storage bag then refrigerate for up to 3-5 days at 40°F or below.

Freezer. Smoked ham can also be frozen. To freeze, place the ham in a plastic freezer bag, or seal it in an airtight container. Place into the freezer at 0°F or below and freeze for up to six months.

How long does it take to smoke a ham?

The time it takes to smoke a ham may vary depending on how large the ham is, and if it has a bone in the center or not. It also depends on if your ham is raw or pre-cooked. The timeframe may range from 2+ hours depending on the specifics of your ham.

How much ham per person?

A good rule of thumb is to plan on approximately ¾ pound for bone-in ham per person. If you are preparing a boneless ham, you can plan on more like ½ pound per person.

What type of ham is best for smoking?

We strongly recommend that you choose bone-in ham that has already been smoked or pre-cooked. We also like spiral sliced hams because this allows you to get the flavor in between the slices.

What is double smoked ham?

Double smoked ham is when you buy a smoked ham from the store, this means that it has already been cooked once, and is already smoked. When you choose to smoke the ham when you get home from the grocery store, this is smoking it the second time, making it a double-smoked ham, yum!

Can I use a non-spiral sliced ham?

Absolutely, you can use, non-spiral sliced ham if you prefer.

How to Smoke a Ham perfectly every time

Smoking your ham allows you to enjoy your delicious ham with a tasty twist. We may be partial but this recipe allows you to make a fabulous ham, that turns out perfectly each time. You simply have to taste it to fully comprehend how delicious it is!

Learning how to smoke a ham is very easy. There are many different kinds of ham you can get, but our favorite is the spiral-sliced, smoked ham, which allows you to double smoke the ham to perfection. Give this recipe a try today and see what you think! 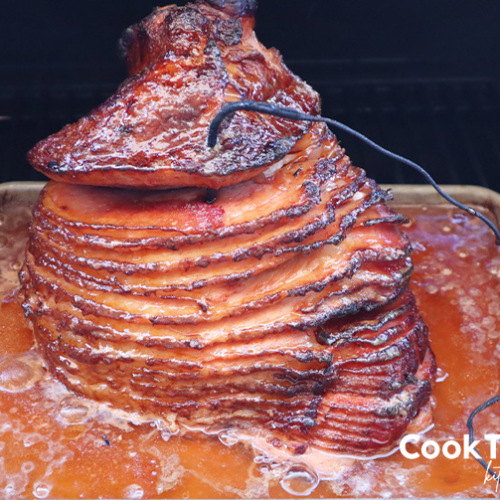 How to Smoke a Raw Ham

How to Smoke a Pre-Cooked Ham

How to Make Brown Sugar Glaze

Side Dishes for Holiday Ham