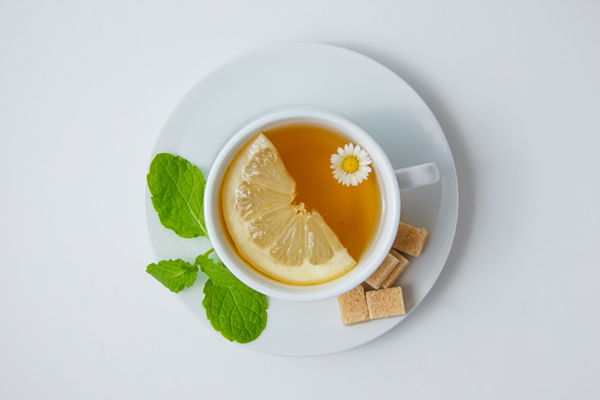 Does white tea have caffeine? White tea has become a popular beverage that is enjoyed by many. But there are some myths that surround it.

We’ll take a look at how much caffeine is present in an average 8 ounce cup of white tea as well as benefits and alternatives that you’ll be interested in knowing.

Caffeine is a substance that’s present in a number of plants. Consuming it helps to work as a mild stimulant to the central nervous system and brain, creating alertness and boosting energy.

Why Do Tea Plants Have Caffeine?

Interestingly, tea plants have caffeine as a means of self-protection. The caffeine works to inhibit predators such as insects and fungi from invading it and consuming it.

What is White Tea?

White is made from the same plant as black, green and oolong teas, however the tea leaves are young and minimally processed comparatively speaking.

Yes, white tea contains a fair amount of caffeine. In fact, it’s ranked second among the most popular teas that contain caffeine. It has about 40 mg per 8 ounce serving.

See our list below for a comparison chart of how it ranks among other teas.

If you’re wanting to stay away from caffeine for health concerns, dietary restrictions, or just plain insomnia, we don’t blame you. Here are some caffeine-free alternatives that you might like to try.

Maybe you’ve resorted to white tea thinking it has less caffeine than other teas and you’ve come here disappointed to find out otherwise.

If that’s the case, then there are some ways that you can minimize the caffeine content in white tea. Here are some ideas.

Using fewer leaves such as can be used with whole leaf tea can help to minimize caffeine.

Instead of using them just once, save them and use them a second or a third time.

White tea that originates from Fujian, China tends to have a lower caffeine level because of the variety of leaves used.

It’s as easy as that. Why not opt for decaf?

White teas made with tea leaf tips such as tea leaf buds is going to minimize caffeine.

Opting for white tea blends or flavored teas can help to reduce your caffeine intake in some cases.

White Tea Caffeine Content is Higher Than You Think

Just because a drink is lighter in color and flavor than its similar counterparts doesn’t necessarily mean that it’s lighter in caffeine. This is the case for white tea.

The Assumption About the Caffeine Content of White Tea

There is a mythological assumption about the caffeine content of white tea that because it is light in color, it contains significantly less caffeine than other teas. This is not true.

White tea has the second highest level of caffeine, next to black tea. See our chart of the caffeine content of various teas below.

Factors That Influence the Caffeine Content of White Tea

You might be surprised to find out that white tea contains caffeine, unless of course you buy caffeine free tea. Here are some factors that can influence how much caffeine is present in white tea.

Age of Tea Leaves. The age of the tea leaves matters because new buds have higher caffeine levels. Therefore, when new leaves are used as opposed to old leaves, the caffeine content can be higher.

Age of The Tea. The same is true with the age of the tea. Caffeine decreases with age so if the tea has been aged for a time it will likely have less caffeine than new tea.

Type of Tea Plant. The type of tea plant can play a factor in how much caffeine is present in tea.

Brewing Process. The brewing process can also determine the amount of caffeine in white tea.

Time. The time the tea is brewed also matters for the quantity of caffeine that’s present. The longer the tea leaves are allowed to seep, the greater the potential of more caffeine content.

Temperature. A hotter brewing temperature can produce greater results for a higher amount of caffeine being present.

Amount of Leaves. Using more tea leaves to brew the tea produces a greater potential for concentration of caffeine in the outcome.

Did you know that the use of tea leaf buds to make white tea has a greater potential of producing a higher amount of caffeine in your cup of tea?

Tea leaves are older than buds and as the leaves age, the caffeine content has a tendency to slightly decrease.

Following is a comparison of the average mg of caffeine content for an 8 oz cup.

How Much Caffeine Is In White Tea?

There is approximately 40 mg of caffeine in an 8 ounce cup of white tea.

Is white tea good for you? You might be curious about any health benefits of drinking white tea. Research shows that white tea contains benefits from antioxidants, it can assist with weight loss, and many people like it because it’s minimally processed.

Following are frequently asked questions that relate to does white tea have caffeine. If you have a question that’s not answered here, feel free to drop it to us in the comments box below and we’ll be happy to answer it.

How much caffeine is in white tea?

It is estimated that white tea has approximately 40 mg of caffeine for an 8-ounce cup.

Does white tea have more caffeine than coffee?

Can white tea keep you awake?

Yes, because white tea contains caffeine, it has the potential of keeping anyone who consumes it awake.

What tea has no caffeine?

Teas that have no caffeine generally include herbal teas and fruit teas. Check the packaging label to be sure.

Which tea has the lowest caffeine levels?

Herbal and fruit teas usually contain little to no caffeine, but always check the brand packaging to confirm.

Does white tea have less caffeine than coffee?

Does oolong tea have caffeine?

Oolong tea usually tea has about 37 mg of caffeine per 8-ounce cup.

Does chamomile tea have caffeine?

Generally speaking, chamomile tea doesn’t have caffeine. However, you’ll want to check the specific brand packaging to be sure.

Does green tea have caffeine?

Green tea has 28 mg of caffeine per 8-ounce cup.

Does black tea have caffeine?

Black tea has about 47 mg of caffeine per 8-ounce cup.