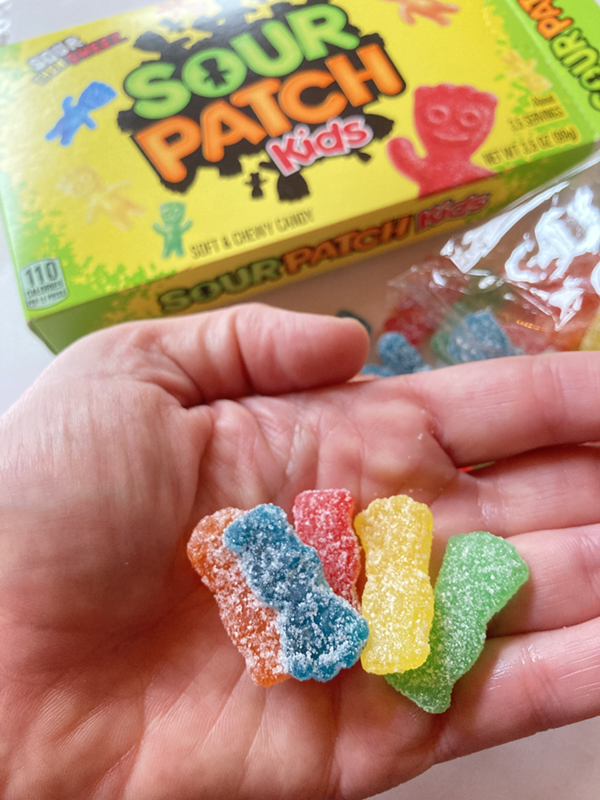 Are Sour Patch Kids vegan? The answer to that question is somewhat controversial and is based on personal preferences and the extent of dietary restrictions. We’ll lay out all the details as to why some consider them vegan and some don’t, then you can make the best decision for yourself.

What Are Sour Patch Kids?

Sour Patch Kids are brightly colored gummy candies that are shaped like people and are coated with sugar. They taste somewhat sour and then sweet.

The candies have evolved over the years. In the 1970s they started out being created and being called Mars Men.

Then in the 1980s they were morphed into shape of little children because of the success of cabbage patch kids and became known as Sour Patch Kids.

Our primary goal with this post is to look into the aspects of plant-based considerations and determine are Sour Patch Kids vegan.

To make that decision, first we’ll want to look at what they’re made of.

What Are Sour Patch Kids Made Of?

Let’s start off by looking at what the candy is made of. This will help us determine things like are are Sour Patch Kids vegan, are they gluten free, and more.

Why The Sugar in Sour Patch Kids May Not Be Vegan

While the sugar covered candies don’t include ingredients that are derived from animals, ingredients like refined sugar from bone char, modified corn starch, artificial flavors and colors, along with citric acid can make them non-vegan, according to some.

Following are the varieties and flavors of current offerings of the candy.

Yes, Sour Patch Kids are not made with any wheat, rye, or barley products or traces of these products making them gluten free.

So… Are Sour Patch Kids Vegan or Not?

The answer to this question is somewhat tricky. We’ll explain why.

Yes, in the United States, these sugar covered sour then sweet candies that many have grown to love are made with vegan friendly ingredients and are safe to consume for those who eat according to vegan dietary restrictions.

However, there are no ingredients that are derived from animals, the candy includes refined sugar that’s potentially from bone char, modified corn starch, artificial colors and flavors that some vegan eaters would choose to avoid.

The answer to this question is it depends on your preference. Red #40 is vegan in that it doesn’t include animal products. Even when it’s present in various foods, many vegan eaters would consider it vegan-friendly.

Can You Make Sour Patch Kids at Home?

Yes, there are recipes on the web that give step by step instructions for how to make them at home using citrus fruit juice, sugar, and citric acid. Making them at home can allow for greater control over the ingredients used.

You might also opt to make these delicious candies at home for a healthier outcome.

By making them yourself you can use the flavors you choose and add the desired amount of sugar without all of the unhealthy additives.

No, Sour Patch Kids that are made in the US don’t contain gelatin. Instead, modified corn starch is used to give them that gelatin like consistency.

Sour Patch Kids are not kosher certified. If you’re looking for a kosher certified product, you’ll want to keep looking as this sour and then sweet candy doesn’t fall into that category.

The argument for Sour Patch Kids not being vegan comes from some of the stricter vegan requirements such as these sugar covered candies include ingredients like refined sugar from bone char, modified corn starch, artificial flavors and colors, along with citric acid that make them non-vegan.

However, they don’t include any ingredients that are directly derived from animal components which classifies them as vegan friendly by some.

Why Do Some Vegans Eat Sour Patch Kids?

The reason that some vegans choose to eat Sour Patch Kids is because the ingredient list doesn’t include any directly derived animal products, making them safe to eat.

When Sour Patch Kids Are Not Vegan

Sour Patch Kids are not vegan when they’re made with ingredients that include gelatin, beeswax, or confectioner’s glaze.

These are ingredients that are made with animal byproducts and would not fall in the category of vegan friendly options.

And some consider them to be non-vegan because of the inclusion of sugar thought to come from bone char, modified corn starch, and artificial colors and flavors.

Since we have a few UK readers, we thought it important to also include the status of this candy when it’s made in the UK.

The complete non-vegan list of ingredients for this cany made in the UK includes, gelatin, palm oil, cane sugar, and other products that relate to animal testing.

Following are frequently asked questions that relate to are Sour Patch Kids vegan. If you have a question that’s not answered here, feel free to drop it to us in the comments box below and we’ll be happy to answer it.

Are all Sour Patch Kids vegan?

You’ll want to check the labels and know how to look for ingredients that are not vegan.

What sour candy is vegan?

Following are some sour candies that are vegan and are advertised as such.

No, Sour Patch Kids made in the US don’t contain pork gelatin.

Do Sour Patch Kids have gelatin?

No, in the United States they’re made with modified corn starch which gives them their gel like texture, but their ingredient list doesn’t include gelatin.

Yes, like most all foods, Sour Patch Kids have an expiration date or best if used by date.

Are Sour Patch Kids bad for you?

Eating Sour Patch Kids in moderation will likely be fine for someone who has no dietary restrictions. However, eating a lot of them could be bad for you as they have artificial colors, flavors, and a fair amount of sugar which is unhealthy.