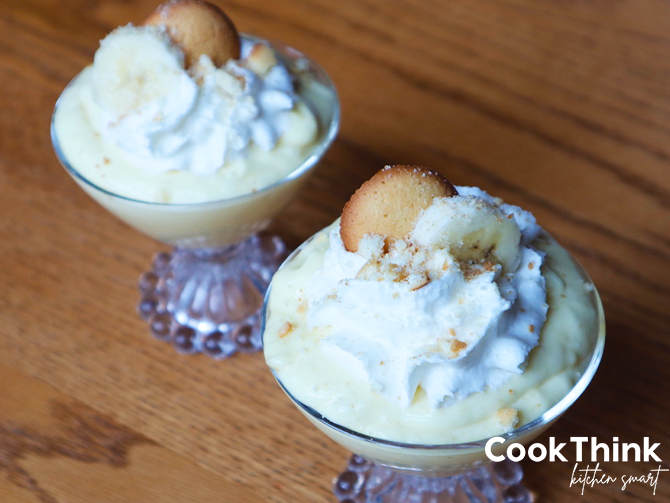 Our 3 ingredient banana pudding recipe is very easy to make, and it tastes great. You have got to try it for yourself to grasp how delicious it really is. It’s hard to believe that something this simple can taste so good. We are excited to show you how to make it yourself!

Are you a banana lover? If you like banana flavored things, this three ingredient banana pudding recipe is one you have got to try.

It’s so easy and tastes great, this just might be your new favorite pudding recipe.

Now, let’s look at what you need in order to make this delicious pudding recipe. Let’s turn our attention to the ingredient list below.

Vanilla Pudding. You can pick up any brand of no cook vanilla pudding at your local grocery store. Only be sure that the box of pudding does not require it to be cooked.

Half and Half. Our favorite way to make this is to use half-and-half, however, if you need a substitute you could also use whole milk, Cool Whip, or heavy cream.

Bananas. Using bananas that are ripe, will give you the sweetest flavor and the best overall taste of your banana pudding. However, you can use whatever types of bananas you prefer if desired.

How to Make 3 Ingredient Banana Pudding

To make the pudding, begin by adding your heavy cream, and putting into it a mixing bowl. Take a mixer and whip the ingredients until combined, and the pudding begins to thicken.

In a separate bowl, peel two bananas and gently mash them. We like to leave a few chunks, but this is not required if you want it to be completely blended.

Now, take your banana mixture and add it into the pudding mixture. Gently fold with a spatula until combined.

Now it’s time to assemble the pudding. If you want to make it look pretty, we recommend taking your leftover bananas in them into slices.

Once assembled, cover with plastic wrap, and refrigerate for a couple of hours to chill the pudding. Once chilled, serve, and enjoy.

Some of our favorite topping ideas for banana pudding include:

Refrigerator. For best results, we recommend storing banana putting in an airtight container in the fridge for up to four days. After that, banana pudding is likely bad, and should no longer be eaten.

Freezer. We do not recommend freezing this recipe for banana pudding.

Variations for This Banana Pudding Recipe

There are so many different ways you could make this pudding. You really could change up the flavor if desired simply by adding another kind of fruit to the recipe, or even use a different flavor of pudding mix. Below are a few of our favorite variation ideas.

To make chocolate banana pudding, it’s very easy, simply use a box of chocolate pudding mix rather than vanilla. Otherwise, you can prepare it as instructed above.

Can I Use Frozen Bananas for No Bake Banana Pudding?

Although you can use frozen bananas for this pudding recipe, we do not recommend it as it will change the overall taste, texture, and consistency of the pudding making it not as desirable.

How Do I Store Leftover Banana Pudding?

The best way to store leftover banana pudding is to transfer it to an airtight container and place it in the fridge for up to four days.

What bananas are best for Banana Pudding?

You can simply pick up some ripe bananas from your local grocery store, allow them to sit on your counter for a few days to ripen before adding them to the banana pudding.

The best way that we have found is to let them have a few brown spots on the bananas which will indicate they are beginning to sweeten.

Why did my banana pudding not set?

For this recipe, if your pudding did not set, it is likely because the pudding mix was not mixed properly. You’ll want to be sure that the box mixture has thoroughly dissolved in your liquid before proceeding.

How ripe should my bananas be for banana pudding?

We recommend using bananas that are starting to get brown spots on them. These bananas will be sweeter than green or plain yellow bananas.

However, if your bananas are mostly brown, these are likely to have gone a little bit past pudding banana and should be made into banana bread instead.

This three ingredient banana pudding recipe is so easy to make, and it tastes great. If you are looking for a quick and easy snack, dessert, or appetizer, this is when you have definitely got to try it out. It’s so easy you won’t believe how great it tastes. Give it a try today and let us know what you think!